A temporary ceasefire to allow them to exit safely was broken within hours. 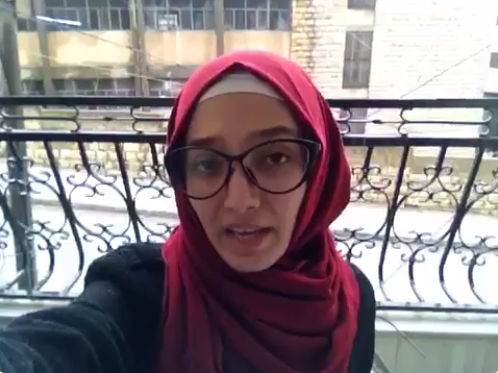 Around 50,000 civilians are believed to be trapped in the last rebel-held area of Aleppo, Syria, today as the Syrian army has restarted its brutal military campaign to finally retake the city.

Activists, journalists, and citizens with cell phones and Twitter accounts have been sending heartbreaking messages of the encroaching “doomsday” and sending their final goodbyes as the Syrian military approach.

"I hope you can remember us."

This teacher in Aleppo shares a harrowing "last call" video as government forces take control of the city. pic.twitter.com/2CMzZplvav

"We are here living a genocide, literally."

this is a call and might be the last call.
Save Aleppo people. Save my daughter and other children. #StandWithAleppo

It is the doomsday inside Aleppo. Bombs bombs are over the head of civilians. people are running running but don't know where to go.

Bana Alabed, a 7-year-old girl who has been Tweeting about the battle of Aleppo in recent months, along with her mother, Fatemah, tweeted several “final goodbye” messages from her account, pleading for the world to intervene in the violence.

My name is Bana, I'm 7 years old. I am talking to the world now live from East #Aleppo. This is my last moment to either live or die. - Bana

The United Nations Children's Fund said as many as 100 children were trapped in a building separated from their families under attack from the army.

"According to alarming reports from a doctor in the city, many children, possibly more than 100, unaccompanied or separated from their families, are trapped in a building, under heavy attack in east Aleppo," UNICEF Regional Director Geert Cappelaere said.

A ceasefire that was announced Tuesday to allow the civilians to safely exit from the decimated city was broken by Wednesday, as rebels and Syrian forces began fighting again and blaming each other for breaking the agreement.

Read More: In a Miracle Rescue, Boy Dangling From Aleppo Building Is Saved

The regime of Bashar al-Assad has all but retaken the city from rebels this week, allegedly carrying out “summary executions” as they did.

Russia and Turkey brokered the short-lived ceasefire and announced it on Tuesday. The United States, which has been campaigning for a ceasefire for weeks, was not part of the deal, and a U.S. State Department official said he was skeptical Russia would honor the agreement.

Turkish President Recep Erdogan said Wednesday that the ceasefire was “perhaps the last hope for the innocents” and said that Assad’s regime was “clearly committing war crimes and crimes against humanity in Aleppo.”

“Not even a few hours had passed since the agreement was reached that the regime forces broke the cease-fire and once again started to attack civilians,” Erdogan said.

The United Nations has been holding emergency sessions on the assault, with representatives of Russia and the US exchanging heated arguments over the slaughter of civilians. US Ambassador Samantha Power delivered a fiery speech asking Russia why it allowed the siege to go forward.

“You are plotting your next assault. Are you truly incapable of shame? Is there literally nothing that can shame you? Is there no act of barbarism against civilians, no execution of a child that gets under your skin, that just creeps you out a little bit? Is there nothing you will not lie about or justify?” she said.

Russian UN Ambassador Vitaly Churkin derided Power’s speech as an attempt at being a “Mother Theresa.”

“Please remember what country you are representing. Please remember your country’s track record, and then you can start opining from the position of any moral supremacy,” he said.

Assad & Iranians broke the ceasefire. the genocide still ongoing!
No one could leave the city#StandWithAleppo#Aleppopic.twitter.com/rKencmZ3eN

the last massage. Thanks for everything.  we shared many moments. The last tweets were from an emotiomal father. Farewell, #Aleppo