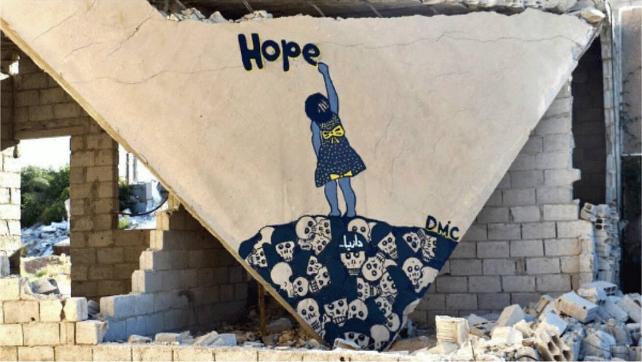 In 2014, when Abu Malik al-Shami started using the dilapidated streets of a town near Damascus as his canvas, the Islamic State had already taken control of large parts of Syria and Iraq and declared a “caliphate.” Attempts to rally the international community toward a political solution to the war had fallen apart in Geneva. The US was gearing up for a campaign of airstrikes targeted at IS.

The Syrian civil war was in full swing, and al-Shami’s street art brought a ray of hope to the community of Darayya.

“After the first painting on Darayya’s walls, I noticed the amount of happiness and optimism it spread on the faces of the blockaded people,” al-Shami told the non-profit, Syria Direct. “It made me feel the value of my work, its positive impact.”

His first mural to gain international attention depicted a young girl standing on top of a pile of skeletons to write the word “Hope” on a wall. This was back in August 2014.

This mural painted onto rubble in Darayya, Syria, depicting a young girl writing the word 'Hope' as she stands on a pile of skulls simply has to be shared. Abu Malik al-Shami has been dubbed ‘Syria’s Banksy’ since more than 30 of his politically-charged artworks have appeared around the suburb of Darayya near the capital Damascus in the last two years. The rebel fighter-turned-artist was recruited by the Free Syrian Army (a moderate anti-Assad force now incorporated in the Supreme Military Council) in 2013 whilst still a teenager. #syria #abumalik #instalike #instadaily #instapolitics #instaart #art #potd #pictureoftheday #darayya #damascus #ihavethisthingwithwalls #peace #dailypic #middleeast

He has painted more than 30 others, according to Syria Direct.

Al-Shami grew up in Damascus, but didn’t start producing street art until he moved to Darayya to serve with the Free Syrian Army.

“When I arrived, the fighters initially laughed at my sketchbook and asked me, ‘What are you planning to do with that?’ At the time, I just thought it would keep me sane,” he told the non-profit Middle East Eye.

Read more: How Graffiti Artists Use Their Voice and You Can Too

Much of his work considers the dissonance between daily life before and after the war. One image, “Imagination is everything,” depicts scenes of a living room — a television set, a vase of flowers, a fishbowl, and a coat rack — on the empty, bombed out wall of an apartment.

Another series depicts a young girl teaching a soldier to “Use Your Heart,” “Use Your Mind,” and “Don’t Be A Pawn."

Al-Shami’s artwork follows in the tradition of street artists like Banksy, but is also one example of the numerous Middle Eastern street artists who have used the power of art to make political statements.

There is Laila Ajjawi, a Palestinian refugee in Jordan who paints murals on the walls of her camp to promote women’s rights. In Egypt, street artists played a key political role in the Arab Spring. In Yemen, a powerful street mural of a malnourished child in a blood red coffin brought awareness to the suffering inflicted by the country’s civil war.

It remains to be seen whether al-Shami’s artwork will continue to pop up on crumbling buildings in Darayya. In August 2016 government forces took control of the city back from the rebels. Let’s hope al-Shami’s art will stand as a reminder of the potential for collaboration in a time of divisiveness.