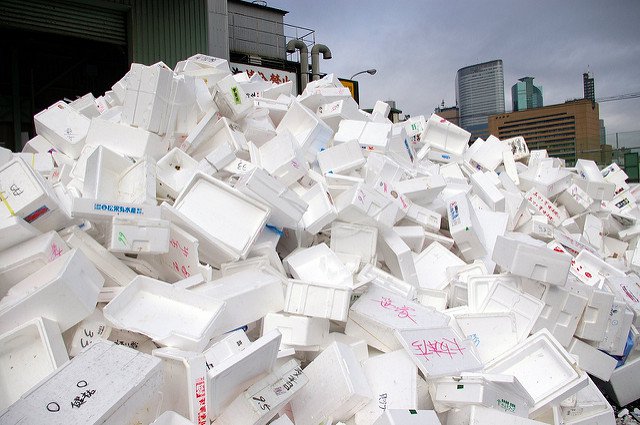 Styrofoam may be the worst form of plastic. It’s very difficult to recycle, takes a long time to decompose and, because of its light weight and tendency to fragment, regularly ends up in oceans where it poses a major threat to marine life and birds.

The evidence against styrofoam is abundant, the evidence for styrofoam doesn’t really hold up. Sure, it’s convenient, but there are too many alternatives that are far better for the environment. On Wednesday, San Francisco recognized this and decided to ban all polystyrene, the chemical name for styrofoam, products by 2017.

It’s a huge victory for environmentalists and continues San Francisco’s reputation as a forward-looking city. Back in 2007, San Francisco became the first US city to ban plastic shopping bags and in 2014, the city banned plastic water bottles on city properties.

The new ordinance covers all uses of styrofoam: packing peanuts, packaging for food, coolers, and more.

It’s part of the city’s ambitious zero-waste initiative that will require all citizens to recycle and compost everything possible by 2020.

Critics of regulations like this say they are paternalistic and limit the freedom of citizens to do what they want.

But there comes a point when consumption patterns begin to threaten the freedom and livelihood of others.

Humanity has already surpassed that point in significant ways. Human-fueled climate change has disrupted environments around the world, affecting how communities get food and water.

And the amount of waste produced in the world is becoming unsustainable. By 2100, the amount of global waste generated is expected to triple. Already, huge gyres of plastic exist in the oceans, harming marine life, and mountainous landfills continue to grow around the world.

Something has to be done to curb the growth of waste and better recycle what ends up in circulation.

San Francisco is a trendsetter in the US, but in Europe the concept of zero waste has become a celebrated value.

Italy, France, Denmark have all made strides toward zero waste in the past year.

And the message of zero waste is being pushed by some of the world’s hottest restaurants.

The idea of zero waste seems utopian in a lot of ways. It suggests that humans can live harmoniously with the Earth, returning all that they take. It also seems impossible when you consider how awash we all are in consumer goods. But, just remember, plastic was invented in the 20th century. Before that, there was no styrofoam or plastic of any kind.

Imagine how much less waste there was back then.