Slam your sexism down and wind it all around. 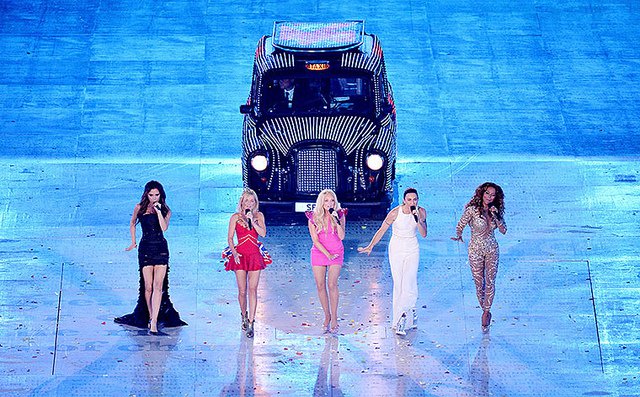 Remember the Spice Girls? Of course you do. The best selling female group of all time. The original pop purveyors of feminist girl power. The women that rocked the world from the roofs of sequined London cabs at the 2012 Olympics. If the legacy of the Spice Girls can survive Geri Halliwell performing ‘Wannabe’ at her own wedding, then surely it will live forever.

If you need convincing, then you need to watch this. In rare footage from a 1997 Polaroid ad leaked this week, the girl group go to town on a sexist director who tried to force them to wear less clothes on camera.

The Spice Girls dragging the makers of the Polaroid ad they were appearing in for trying to make them show their cleavage and midriff. pic.twitter.com/UBAvqIJ5Gq

Mel B is the first to approach the director, asking why he insisted to have “cleavage… and a midriff shown?” The director, the epitome of ickiness, responds that it’s “every man’s fantasy.” The unnamed creep dismisses them, simply stating “that’s showbiz.”

It goes on. Geri Halliwell calls him “a chauvinistic pig,” whilst the unknown cameraman can be heard urging the director to “spank them.” With cries of “girl power,” the girls take on the smirking, unapologetic misogyny on display from the Polaroid ad team. And they win!

As you can see from the finished ad, they didn’t budge. No cleavage, no midriffs, no problem.

The issue with pop music and objectification is ownership. If a female artist wants to dress down to express herself, that is absolutely her right. When forced by someone else in a position of power, it becomes problematic. Physical expression is about choice, and who has ultimate control over the artist’s physical image is at the heart of the Spice Girls dispute.

The reaction to the sexist director should come as no surprise. In many ways, they were the first feminist girl group. Indeed, last year, ‘Wannabe’ underwent an incredible feminist reinvention. It’s the highest selling single of all time from an all-female group. It’s also the most recognisable pop song ever; on average, it takes just 2.3 seconds for the listener to know what’s in their ears. And now, thanks to Project Everyone and the Global Goals, it’s an anthem for gender equality.

Even now, they continue to disrupt and inspire. Talking about the feminist cover of ‘Wannabe’, the artist formerly known as Posh Spice (better known as Victoria Beckham), said: “How fabulous it is that after 20 years the legacy of the Spice Girls’ girl power is being used to encourage and empower a whole new generation?”

20 years on - Girl Power being used to empower a new generation. So proud of @TheGlobalGoals#WhatIReallyReallyWanthttps://t.co/mZx8QePJQE

Empowerment. That’s the point. It’s not so much about pop stars sticking it to the man. It’s about a group of ambitious young women, instructed to do something they weren’t comfortable with, and saying no. It’s about taking back control. And, most importantly, it’s about showing women everywhere, with maximum sass, that they don’t have do as they’re told. Now, that’s showbiz.