The World Food Programme is getting more creative with relief efforts.

As South Sudan’s civil war rages into its fourth year, drought has caused crop failures, leaving people no other option but to eat or sell the provisions they had stored.

In some cases, families have been broken apart by abandonment. In others, because it’s too expensive for everyone to leave at once, only one person in a given family can go and must send money back if they can.

Children are forced to scavenge for roots or dried, brown leaves because there is no other food. Some become soldiers because they have no other options.

This is the reality for people in South Sudan. So, in order to tell this devastating story, the World Food Program (WFP) has found a creative way to portray these struggles.

WFP has published a graphic novel, titled “Living Level-3: South Sudan.” The book illustrates the life-threatening struggle families are currently facing in the world’s youngest nation and provides a more intimate depiction of those suffering from hunger. It also offers a behind-the-scenes look at the work WFP does to alleviate it.

Read More: US Must Step Up to Save 20 Million Facing Famine 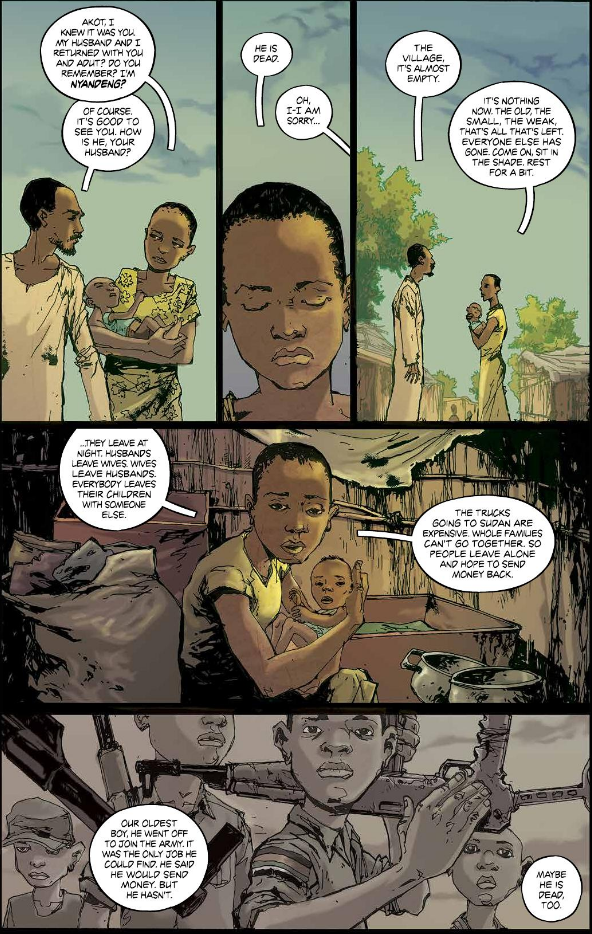 By expanding into graphic novels, WFP hopes it can more effectively galvanize a global response to help those in need.

The organization regularly publishes reports and infographics about vulnerable populations and international responses, while photojournalists provide images. But graphic novels can convey emotions that statistics and photographs cannot.

“It’s based on reality, but you have the creative license to show things you can’t necessarily shoot,” Jonathon Dumont, WFP’s head of television communications told Mashable. “It’s these intimate moments that may have happened to you, but you don’t have the luxury of getting it on film unless you’re shooting a feature film.”

As Dumont indicated, the narrative is dramatized but the people are real. Last September, WFP released a video introducing us to the actual family that inspired the main characters of “LL3: South Sudan.”.

The title gets its name from the UN’s Level-3 emergency classification, reserved for the most severe, large-scale humanitarian crises. “LL3: South Sudan” is the second part of a series of graphic novels released by WFP. The first, published in four installments in the Huffington Post in January 2016, depicted refugees in Iraq.

Fictional aid worker Leila Helal is featured in both stories.

Global Citizen is campaigning to end global hunger by 2030. You can play your part by signing the petition to end hunger in South Sudan and around the world.