Could this be a turning point? 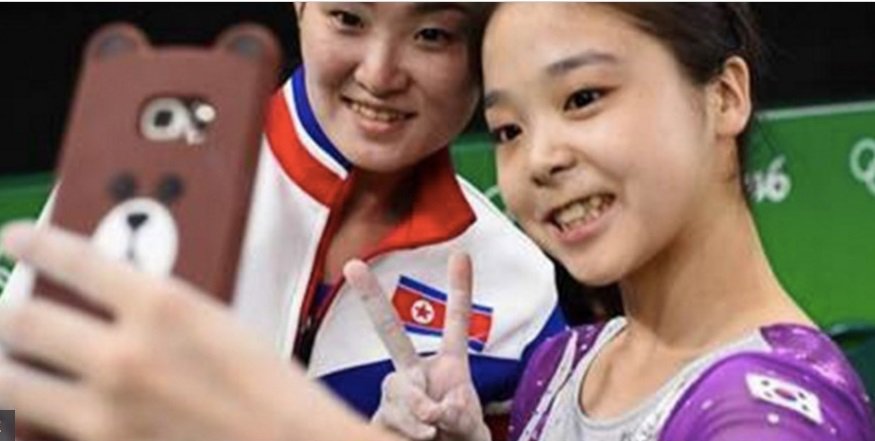 North and South Korea have been at war for more than 60 years, but you wouldn’t guess that if you were watching the Olympic Games over the weekend.

South Korean gymnast Lee Eun Ju and North Korean gymnast Hong Un Jong were milling about, watching the day’s events. Eventually, they passed one another and instead of channeling decades’ worth of hostility and coldly ignoring one another, they stopped, exchanged greetings, and then took a smiling selfie together.

It was a moment that didn’t go by unnoticed.

Gymnasts from North & South Korea take a selfie together. This is why we do the Olympics. pic.twitter.com/Id44OuehN3

This unexpected show of affection could signal something deeper. Perhaps the people of North Korea are tired of a long, lonely war, and are ready to move on and repair relations with a neighbor that used to be part of the same country.

That might be extrapolating too much from a selfie — but it is a selfie being viewed around the world and bringing joy to people everywhere.

There have also been signs that the North Korean government wants to stop the war and start a new chapter that doesn’t involve crippling sanctions.

Earlier this year, North Korea approached the US with plans for peace talks that were, ultimately, rejected for not including provisions to abandon nuclear testing.

Even if the effort went nowhere, it speaks volumes for a country that has belligerently isolated itself on the world stage and refused to cooperate in any capacity.

The Olympics are a time for global unity and celebrating athletic excellence. Despite the intense competition, there doesn’t seem to be any anger or contempt at the Games. It’s two weeks purged of the complicating, messy details of the world outside — and it’s filled with beautiful moments like two top athletes pausing to show one another love, even if their countries wouldn’t dream of doing such a thing.