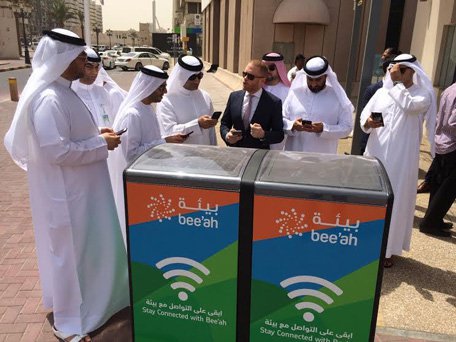 Garbage WiFi is coming to a city in the UAE. Sharjah, the third largest city in the UAE, is the first in the region to install a set of solar-powered garbage cans that will provide free WiFi.

The project is a collaboration between local waste processing firm Bee’ah, development firm Du, and trash can creators Big Belly. The project is starting with 10 bins installed in Sharjah Corniche, a busy section of the city.

The project is another step forward in a long term plan to provide free WiFi across the Emirates. Earlier this year, Dubai added free WiFi at a few major shopping areas, and later this year the city will start providing WiFi signals through street lights.

The trash cans were developed by Big Belly, a company with solar-powered trash compacting bins across the world from New York to Amsterdam.

The trash cans can hold from 5-8 times the normal amount of trash through its solar powered compactors. Further, Big Belly is a pioneer in connecting their trash cans to smart waste management systems wirelessly. These integrated systems can reduce trash collections (and thus the expanded used to power trash trucks) by having the cans alert a central hub when they need to be emptied.

Turning the trash cans' built-in wireless connectivity into a public asset is a major upgrade. New York City is experimenting with the idea as well.

Big Belly’s CEO Jack Kutner is pushing more cities to “stop seeing this as a garbage can.” He told GreenBiz a new generation of garbage cans “could collect all sorts of information” that would make waste management systems more efficient, increase data capture about urban environments and even provide community updates through display or WiFi signals.

Normally standing next to a trash can doesn’t sound all that appealing but a free WiFi signal could change people’s minds. It could also make waste management a more appealing part of urban life, a crucial step toward keeping cities and communities cleaner.