Singapore's First Lady Brought an $11 Purse to the White House, and It's for a Good Cause

It shouldn’t matter what she wears, except when it’s for a good cause. 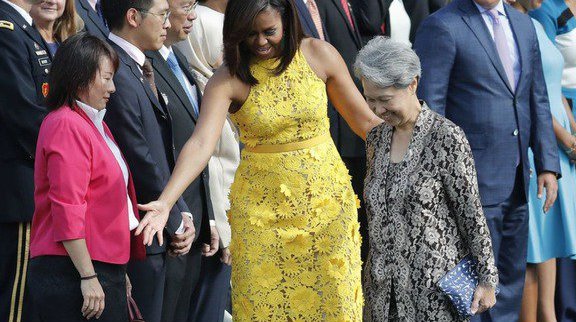 On a state visit to the US this week, Ho Ching, the wife of Singapore’s Prime Minister, wore what some might consider to be a “cheap” bag.

Cue a typical wave of online criticism. Some commentators were not too happy that the Singaporean dignitary had chosen a denim dinosaur-print clutch to wear on a visit to the most powerful family on the planet.

But, as soon as the origin of the bag emerged, the twittersphere changed its tune.

Since the school identified the accessory as Sheng Jie’s creation, demand has been “overwhelming.” An item that once sold 200 clutches in four months, sold 200 in one day after this photo was shared on Facebook.

‘Overwhelming’ demand for Pathlight pouch after #HoChing carries it to @WhiteHousehttps://t.co/GohtRWhhIopic.twitter.com/0950yxZvTG

The bag has since sold out, and there’s now a long waiting list for the next version.

According to digital outlet Today Online, Sheng Jie has been fascinated by dinosaurs since he was three years old and watched a film about the extinct creatures. Now, he spends a few hours each day entirely focussed on his favourite pastime: drawing dinosaurs.

Thanks to the support of his teachers who noticed his talent for drawing dinosaurs from memory, Sheng Jie joined the school’s Artistic Development Programme.

The programme enables students’ to turn their artistic creations into merchandise, which are sold in the Art Faculty shop where students earn royalties from all their sales.

Ms. Ho had bought the bag at a fundraiser for the Autism Resource Centre, a Singaporean charity of which she is a patron.

Read More: President Barack Obama is a feminist, and you should be too

When asked how he feels about seeing one of his creations in the hands of Ms. Ho in such an iconic location, Sheng Jie’s answer is simple: “Happy.”

Representing one of the richest countries in the world, her style choice sends a strong message. In an age where women in politics are routinely scrutinised for what they are wearing, it’s refreshing to see a female leader using the media glare to shine a spotlight onto an important cause.