Rebuilding Life in Simjung, Nepal: Stunning Photos Before & After the Earthquake

Simjung, Nepal is in one of the regions most devastated by the earthquakes in 2015. 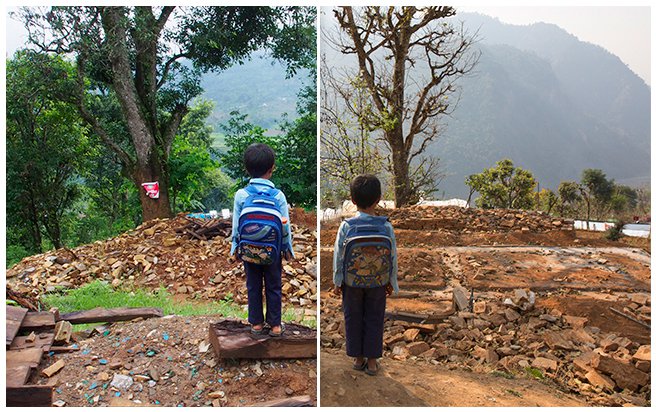 This article was contributed by WaterAid and originally appeared here. All images under copyright courtesy of WaterAid.

Simjung lies in Nepal's Ghorka district – one of the regions hit hardest by the devastating earthquakes that struck in 2015. These before and after images show how far the people of Simjung have come.

Overnight, nearly 5,000 people in Simjung – 95% of the population – lost their homes. They also found themselves with little access to the most basic resources, including clean water and toilets. 12 months on, most people have been able to move back to their homes or have built temporary shelters. But restoring access to taps and toilets remains a priority – which is where your incredible support, and our work with local partners, comes in.

These before and after photos show how things are changing.

Humnath’s home was completely destroyed in the earthquakes, but today he's making plans for a new brick house – and has started by building a new toilet.

Nepal was rocked by two earthquakes, the first of which hit 7.8 on the Richter scale. The country also faced ongoing aftershocks, which caused even more damage to shattered communities.

At first, schools and healthcare centers were operating in open fields under temporary shelters. A year on, some are ready to be used again.

As well as building water points and toilets, your support has helped set up handwashing lessons in schools, so children can get back to learning in a clean, safe environment.

Building back better means that, as well as helping people access safe water and toilets, we're helping to build resilience, so communities can cope better with disasters in the future.