How an all-star app could have complicated global consequences.

Last month I found myself sitting in a NYC taxi in mind-numbing midtown traffic. The gridlock was so intense my cabbie started a conversation with the driver of the black car next to us. The boxy U logo in the windshield was my tip-off: an Uber.  As lights changed from red to green to red (again) without any forward progress, my driver hounded the Uber-er with questions: How much do you make? What are your hours like? When did you start? Do you like it?

His conclusion? “I want to switch to Uber.”

Since Uber was founded in 2009 it has effectively changed the taxi game. To date the app is available in 60 countries and over 300 cities. The company had 26,000  drivers in New York City, 20,000 in Chengdu, China and 15,000 in London, as of June, according to the New York Times. And that’s just three of Uber’s cities! Rapid global expansion is all part of the plan.

But along with this story of tremendous business success, there's also tremendous controversy. Protests have broken out among taxi drivers in Paris, Rio de Janeiro and Costa Rica (just to name a few), who claim Uber creates unfair competition. In New Delhi, a woman was allegedly raped by her Uber driver and the service was temporarily banned.  Thailand, Spain and the US have filed lawsuits against the company questioning everything from how Uber performs background checks on their drivers, to how their drivers are compensated. 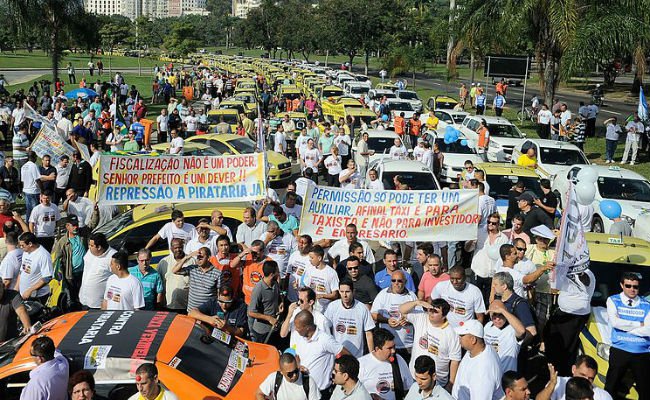 You get the gist.

Amazingly, Uber has continued to expand despite legal obstacles, basically by maintaining that it is directly answering the demands of  consumers.  Uber is supposedly about innovation and freedom. It gives customers choice and time/cost efficacy since incumbent taxi services are frustrating and inadequate. The power is in our hands!

But is it really?

I’m all for saving my time and money with a convenient Uber carpool, but it’s important to zoom out and think of the big picture. Sometimes immediate consumer satisfaction needs to be weighed with larger, worldwide repercussions.

The Uberization of cities on a global scale could have frightening consequences for individuals and economies. While Uber might market itself as the consumer dream, it’s no different than any other company: making money is the bottom line.  So what are the costs?

Essentially, as the company is structured today, Uber does not follow the laws of the cities and countries in which it operates. Federally regulated taxi services and forms of public transportation come with certain guarantees. Prices are set so that drivers can make a decent salary. The specific traffic laws of a city are followed. If a passenger is assaulted or feels discriminated against, taxi companies are held liable for their employees' actions. Passenger insurance is covered. Basically, there is accountability and a certain level of law and order. Regulation is meant to protect both workers and consumers alike, and as of now Uber tends to flout regulation.

Uber’s ability to avoid regulations is built into its business model. Drivers are classified as “contractors” instead of “employees,” which means the company can get away with avoiding obligations like regulated work hours, job protection, unemployment benefits and other employee rights. Drivers work as freelancers, and Uber doesn’t have legal obligations to/control over the many drivers that choose to use their app. It’s simply a digital platform connecting supply with demand.

This classification as “independent contractor” can be used as Uber’s defense in all kinds of murky legal situations. It means that when Uber was sued for discrimination against customers with wheelchairs and seeing eye-dogs, the company could say, “Well we’re not an employer,” and therefore cannot “control what drivers do.”  It also means that Uber does not have to pay all the fees and taxes other, regulated, transportation companies do and therefore can charge significantly lower rates, creating an uneven playing field. It's a slippery slope that could have dangerous human rights repercussions. 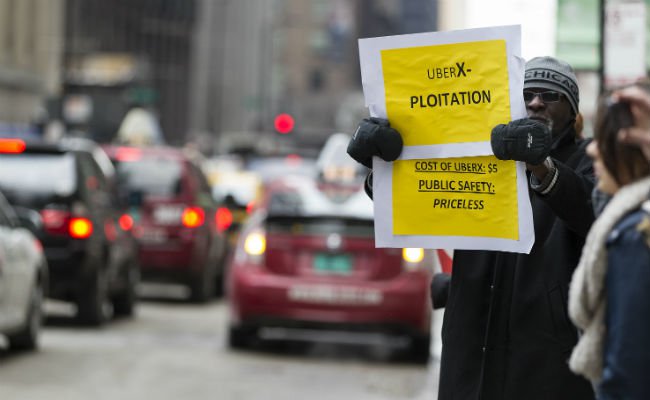 “Their major innovation… is strategic and manipulative,” a July piece in the Guardian said of Uber, “and it’s meant to undermine local needs and effective governance.”

As Uber expands to less developed countries where federal regulations and systems are already shaky, and there are more people willing to work for a company regardless of salary/protection, problems could be magnified. It creates a “race to the bottom” where vulnerable individual contractors watch things like job security and a working minimum wage evaporate. The more companies structured like Uber in operation, the more prices will be driven to unlivable levels.

There’s no denying Uber has tapped into a system consumers respond to, and evolving technologies are all part of progress. Many experts agree that the answer is not stunting Uber’s development, but finding ways to regulate it. Incorporating tax-collection software into the app and regular health/professional checks on the drivers would be a good place to start.

Uber’s model is one many companies emulate: businesses transform themselves through “Uberification,” and start-ups pitch themselves as “the Uber for _______”.  Sometimes the model results in innovative sanitation efforts in Dakar, but sometimes it results in getting underpaid to clean cat poo through TaskRabbit. The point is that more than ever what starts in one city doesn’t stay there, so it’s important we don’t jump on the new technology bandwagon before thinking about the global ripple-effect.