US Senators Working to Expand Aid for Famine Victims 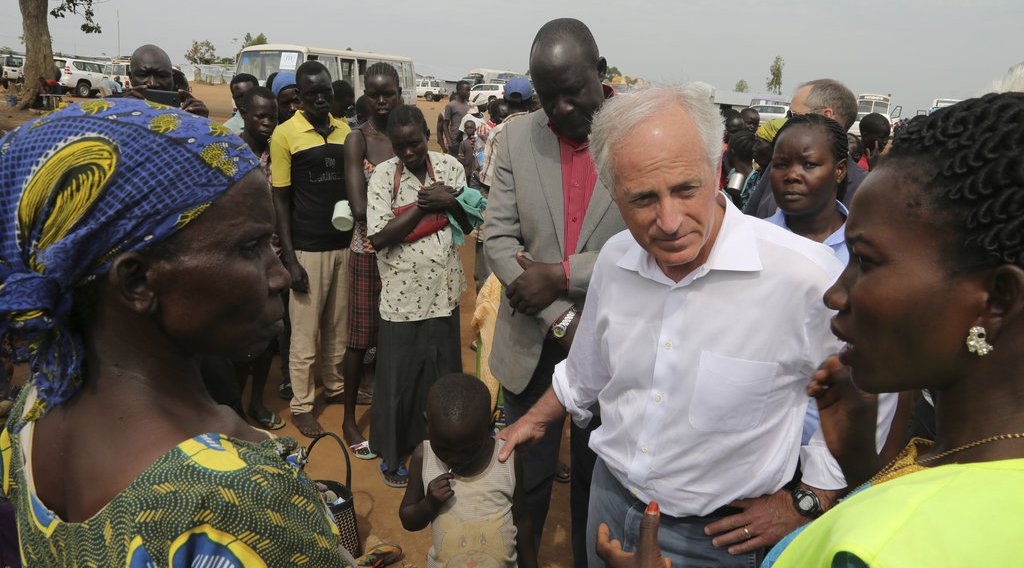 As the debate over proposed US foreign aid budget cuts by the Trump administration heats up, Sen. Bob Corker (R-TN) and Sen. Chris Coons (D-DE) are proposing a more humane alternative to cutting foreign aid. The two senators are instead arguing in favor of reforming aid to be more flexible in how it distributes goods to those in need.

On Friday, the two senators got a first-hand look at the inefficient food distribution system for South Sudanese refugees when they traveled to a refugee camp in Uganda, AP reports.

Take action: Sign The Petition To Stand For US Foreign Assistance

As AP reported: “The senators watched as South Sudanese divided sacks of corn and cereals during a food distribution. Behind them, snaking lines of refugees waited for their rations of food that last for 40 days.”

Uganda, one of the poorest countries in the world, has accepted an estimated 172,000 refugees in the first three months of 2017 alone, despite being in “urgent need” of $250 billion in foreign aid assistance. The UN has estimated that 100,000 people in South Sudan are currently experiencing famine, and that another 1 million are “on the brink of starvation.”

But food aid for the South Sudanese refugees pouring across the border has been hard to come by.

“It's taken in some cases six months for those products to actually get here,” Sen. Corker told AP. “We have people coming over the border (from South Sudan). They need food. We can actually buy the food cheaper, use our taxpayer dollars cheaper.”

Every day, 1000s of refugees arrive in Uganda, fleeing famine in South Sudan. The US can & must continue to provide humanitarian assistance. pic.twitter.com/147MjJBPgv

Read more: Uganda Is the World’s Most Welcoming Country for Refugees, But It Needs Help

The senators, who are both members of the Senate Foreign Relations Committee, found that a major issue with foreign aid as it currently stands relates to inefficient distribution systems.

For example, it can take up to half a year for US food aid to reach those in need because of a law that requires the bulk of foreign food aid to be produced within the United States. In 2015, the two senators drafted legislation to reform this system, called the Food for Peace Reform Act of 2015.

“Our current system for acquiring and distributing food aid is inefficient and often hurts the very communities it is trying to help,” Sen. Coons said at the time.

And now the senators are pushing for new legislation that will free up more food aid that can be produced outside of the US. According to the AP, “roughly $1.2 billion of the U.S. food assistance still carries the restrictions of being grown in the U.S. and being shipped under a U.S. flag.”

Removing these restrictions could free up enough food aid to provide for 2 to 4 million more people currently suffering from famine, AP reports.

Rather than removing foreign aid completely, at a time when up to 20 million people across the horn of Africa are facing a severe famine, this bipartisan plan would make US food aid more efficient and could play an important role in helping poor countries like Uganda deal with the humanitarian crisis that has fallen into their laps, by no fault of their own.

“Last week, we witnessed firsthand the immense suffering caused by the current global food crisis, a situation that is purely man-made, with corrupt governments and armed groups committing savage violence and pushing millions of people to the brink of starvation,” Corker said in a press release. “The conflicts in East Africa and the massive refugee flows that have been created make getting life-sustaining food to those in need an urgent priority that only grows by the day. Senator Coons and I will continue to press for using existing U.S. food aid resources more efficiently to reach millions more people each year.”