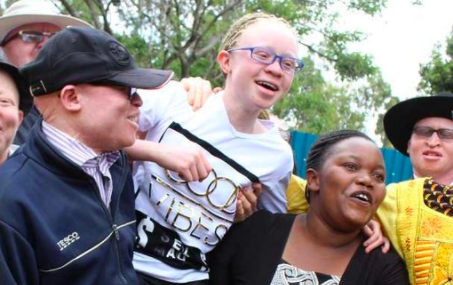 People with albinism face persecution across Africa. Persistent superstitions put them at risk from criminals and even their own family members.

They face what Amnesty International described as “deep-seated discrimination” and, as a result, don’t have the same access to healthcare or education opportunities as people without albinism.

But now, a 14-year-old schoolgirl with albinism has overcome these societal barriers and health problems to come top in the whole country in Kenya’s primary school leavers exams.

We were delighted to meet Goldalyn Kakuya, the top KCPE top candidate, and her parents @StateHouseKenya a few moments ago. Her triumph encourages us; we, in turn, encouraged her to maintain the standard she had attained. @WilliamsRutopic.twitter.com/VqnLiqdq7x

Remarkable Goldalyn Kakuya beat a million other children, scoring 455 out of 500 in the Kenya Certificate of Primary Education (KCPE) exams.

Kakuya, from Kakamega County, said her success sends a strong message to Kenyan society, that albinism and other disabilities should be celebrated rather than rejected.

“I am honoured to be here celebrating this,” she told journalists after finding out her result. “It’s wonderful because I didn’t expect to do very well.”

Read more: ‘Dark Magic’: Why Vulnerable People Are Tortured, Exiled, and Murdered All Over the World

“There is nothing that we cannot be,” she said.

The persecution of people with albinism is particularly pronounced in Tanzania, where children are being killed by witch doctors because locals believe they have “healing” powers and that their limbs can bring luck.

Read more: Tanzanian Court Sentenced Six to Prison for Cutting Off the Hand of Albino Boy

Amnesty International last year highlighted their plight, saying: “This unequal treatment is fuelled by superstition and mistaken beliefs. In Malawi, some think that people with albinism have magic in their bones that could make others rich. Many will pay huge sums for their body parts, allowing a gruesome trade in human bones to flourish.”

Another belief is that having sex with a person with albinism can cure HIV.

Skin cancer is also a serious problem for people with albinism in Africa. Just 2% of people with the condition in Tanzania survive beyond their 40th birthday due to crime and health issues.

Read more: Albino Children in Tanzania — Hunted for Their Body Parts — Get Help in US

But Kakuya is determined to send a message to African society.

Her mother, Matilda Tanga, said: “Goldalyn has passed a message to people who look down upon children with albinism and proved that, if such a child is given love and an opportunity, then they can reach their potential.”

Kakuya described when she was younger to journalists, when her condition made her ashamed and afraid to leave the house. Over time, she said she gained self-confidence — which she credited to support from her parents and teachers.

Her father, Harrison, described the first time he saw his daughter: “When I saw her, I embraced my wife. She is my gold.”

Disability rights activists across Kenya added their voices to the praise of Kakuya.

“Goldalyn, you don’t know what you have done to us who have struggled with albinism for over a decade,” said Alex Munyere, founding chairman of the Albinism Society of Kenya (ASK), which works to build awareness around albinism, and gives its members free sunscreen.

The ASK national coordinator, Isaac Mwaura, added: “This girl can be anything, even the President of the Republic of Kenya.”

Global Citizen campaigns to achieve the UN Global Goals, including for education. We believe every child, everywhere, deserves access to a quality education. You can join us by taking action here.