“After all these years, I finally got the chance.” 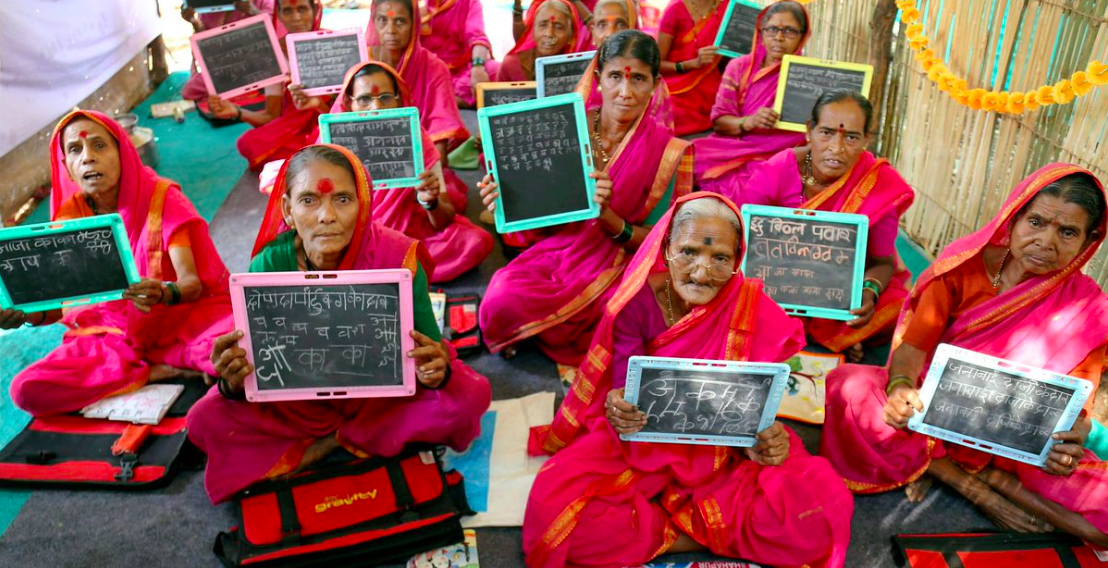 Every weekday at 2 p.m. in Maharashtra, India, a group of 28 students gather in a classroom to learn how to read and write for two hours. They memorize the alphabet, write letters without stencils, their hands shaky, and decipher sentences.

Some students can hold onto what they’ve learned, others find it hard to keep new information intact for the next day. But they all show up on time and are rapt with the possibility of a breakthrough, of letters finally cohering into something sensible.

These aren’t young children as you’d expect — they’re all grandmothers.

School for Grandmothers in Fangane village of Maharashtra teaches elderly women to read & write. It's never too late to get an education 👏👏 pic.twitter.com/kVGQkHqdPJ

In this “school for grandmothers,” or aajibaichi shala, teachers are trying to make up for injustices of the past and present that have left 273 million people unable to read or write in India. Women, in particular, have been neglected, with a 15% higher likelihood of being illiterate. Oftentimes, girls are denied the chance to go to school because they have to do chores for the family. Other times, schools are underfunded, understaffed, and too expensive, or kids have to contribute to the family income by working during school hours.

India has made significant educational progress over the past several decades, to the point that 93% of children are enrolled in primary school today. In 2009, the country make it compulsory for children to attend school until at least 14, but there are wealth disparities often dictate a child’s trajectory. And secondary school enrollment is a whole different matter of inequality.

These unfair circumstances have left hundreds of millions of people at a profound disadvantage.

But now, late in life, many women are finding a form of redemption in a class designed for 5year olds. There’s no shame or reluctance to be found here — all the women are eager to finally understand what’s written on signs and pamphlets and books, and, more urgently, how to sign their names.

“The aajis are so eager to learn,” Sheetal More, a teacher at the school, told The Guardian. “They are obedient, and they never make me feel like I can’t teach them something, just because I’m younger than them.

“They tell me that they don’t want to go up to heaven as illiterates,” she said. “They say, ‘When I meet God, I should at least be able to sign my name.’”

The school was set up by Yogendra Bangar, an elementary school teacher and local hero, who has also brought toilets and clean drinking water to countless families in the area.

For most children, reading is a form of independence, a way to explore, decipher, and think about the world without the guidance of adults. But millions of children never get the opportunity to learn how to read, and they go through life forever bewildered by letters, dependent on others for basic things.

Some of the women attending class are not far from their grandchildren’s schools and the proximity makes them think of what might have been.

“Who knows, if we’d been given the chance to study when we were children, we may all have become doctors,” a student named Ramabai said.

But all in all, hope, not bitterness, fills the classroom. They wear fuchsia saris to replicate the solidarity of school uniforms – and it lends a heightened sense of purpose to the endeavor.

“After all these years, I finally got the chance,” said one woman named Gangubai. “I never thought I would go to school, and look now – I can read the whole alphabet.”