Same-sex couples now have right to marry in Colombia! 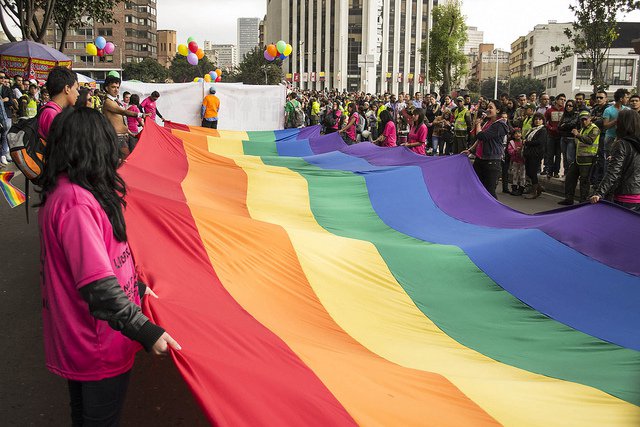 Colombia is now the 15th nation to legalize same-sex marriage.

The country's Constitutional Court ruled 6-3 on April 7th that no judge or notary could reject a couple's marriage request. While this doesn't technically enshrine the principle of marriage equality into law, for all intents and purposes it means that same-sex couples will now be able to get married without hindrance.

Back in 2011, Colombia's courts ruled that same-sex couples were entitled to legal protections, but left Congress to decide the question of marriage by 2013. Congress dithered on the issue, so couples began to get married after the deadline, setting up a protracted showdown between opponents and supporters.

The president of Colombia, Juan Manual Santos, supports same-sex marriage, while the attorney general says that marriage should be limited to a man and a woman. Many legislators are opposed to same-sex marriage.

Public opinion is similarly split. The capital city, Bogota, overwhelmingly supports same-sex marriage, while the country as a whole overwhelmingly opposed the measure.

So the Constitutional Court had to wade through a lot of voices. Interestingly, the court discussed the precedent set by the US Supreme Court, which ruled same-sex marriage to be legal in 2015.

In November of last year, the courts ruled that same-sex couples could legally adopt children, another turning point in the fight for equality.

Taken together, these developments are a major victory and contribute to the momentum towards equality building around the world.

An advocacy group Colombia Diversa celebrated the ruling with a video called "Love Wins" that features a lesbian couple.

The translation is: "This decision by the constitutional court doesn’t change our family. Nor does it transform our love. But it communicates to the world who we are: Wives.”

Globally, there is still a long way still to go.

Currently, around 79 countries deem homosexuality illegal and punish offenders with prison sentences, lashings and even death. Sometimes, communities take their hatred to the streets and murder gay people.

And in nearly all countries, gay people face ridicule and harassment and unequal representation under the law.

When LGBTI rights become legal and mainstreamed, opposition falls away as people begin to realize that all people deserve the same respect and dignity.

In the years ahead, same-sex couples in Colombia will become more accepted.

Other countries, too, will see the changing tide and join the growing group of nations that allow same-sex marriage.

The Netherlands was the first country to legalize same-sex marriage in 2001. Several other countries passed similar measures over the next 15 years, leading up to Colombia's historic decision on April 7th, 2016. The 15th doesn't have the same stature as the first, but it's just as important.

In the fight for equality, every legal action is monumental.