The UN wants a guarantee of no fighting before sending in aid convoys this time. 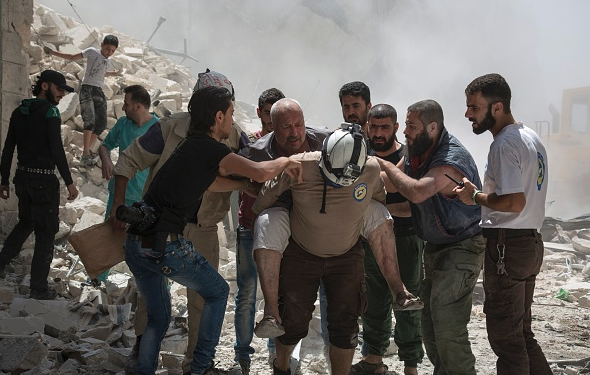 Russia and Syria halted their airstrikes on the embattled city of Aleppo, Syria, early this morning to allow humanitarian aid to reach wounded civilians stuck inside.

Though the official “humanitarian pause” in fighting on all sides was scheduled to take place on Thursday, between the hours of 8 a.m. and 4 p.m., Russia announced that it would stop its airstrikes early as a show of goodwill, according to the Associated Press.

The United Nations had demanded assurances from all sides that there would be no fighting during the temporary truce so that its aid convoys can safely reach the injured inside Aleppo.

Read More: 'I Am Very Afraid I Will Die Tonight': Young Girl Tweets of Horror in Aleppo

Last month, a humanitarian convoy was attacked during a ceasefire, reportedly by Russian forces. The US and UN have since called for a war crimes investigation into the attack.

Russian Defense Minister Sergei Shoigu announced the break in airstrikes beginning at 10 a.m. today and said that civilians and opposition fighters could escape Aleppo using six corridors to other areas, according to CNN.

"The early halting of airstrikes is necessary to declare a 'humanitarian pause'," Shoigu said. "It will ... guarantee a safe exit of civilians through six corridors and prepare for the evacuation of the ill and the wounded from the eastern part of Aleppo."

Read More: Pope Francis Is Practically Begging for a Ceasefire So Syrian Children Can Escape

Shoigu said that Syrian troops on the ground in Aleppo would allow the opposition forces, as well as the wounded, to leave the city unimpeded during the break, the AP reported. Russia continued bombing nearby villages outside of Aleppo, according to the report.

The pause comes after weeks of heavy bombardment by Russian and Syrian warplanes. Drone images have shown utter devastation to the buildings and roads of eastern Aleppo since the bombing increased earlier this month.

Of the 250,000 people who are believed to still be in Aleppo, there are an estimated 100,000 children, according to The New York Times.

On Monday, the UN Special for Syria Envoy Steffan de Mistura warned that if Russia, Syria, and the West could not agree on a solution to the conflict in Syria, "between now and December … Aleppo will not be there anymore."