Homelessness has become a huge issue in the run-up to the wedding.

While it shouldn’t take a royal wedding to raise awareness of the people sleeping rough on Britain’s streets, there’s no denying that Harry and Meghan’s has cast a major spotlight on the issue of homelessness.

It was all sparked four months ago, when a local council leader addressed a letter to the Thames Valley Police, demanding that the issue of homelessness be addressed. But for all the wrong reasons.

“It is becoming increasingly concerning to see the quantities of bags and detritus that those begging are accumulating and leaving on our pavements,” wrote Simon Dudley, the former council leader for the Royal Borough of Windsor and Maidenhead.

“The whole situation also presents a beautiful town in a sadly unfavourable light,” he added.

It sparked a furore that drew condemnation for his comments from Prime Minister Theresa May, charities, and members of the public, and made homelessness one of the key issues to be watched in the run-up to the royal wedding.

But one charity, the Windsor Homeless Project, is taking advantage of the royal wedding fever in order to support the local homeless community by selling a range of merchandise to raise funds. 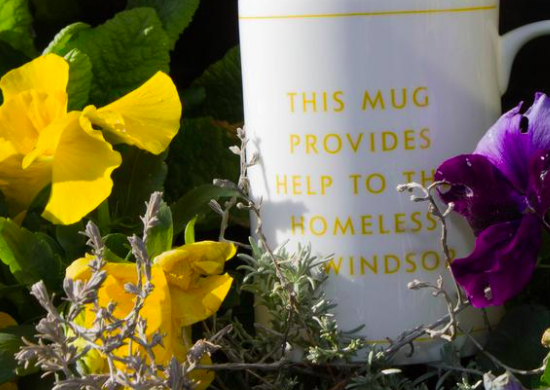 The collection — excellently named ‘For Richer For Poorer’ — features postcards, mugs, fridge magnets, tea towels, T-shirts, and bunting. And for those feeling particularly extravagant, or generous, there’s also a commemorative plate on sale for £5,000.

The £5,000 plate is enough to buy a full moving-in set, according to the project website. That includes furniture, carpets, curtains, appliances, kitchen utensils, and “everything else that turns an empty space into a safe home.”

“Importantly, it also includes a living wage for the support worker that provides the indispensable guidance and companionship needed to stay on track despite challenges and setbacks,” according to the website. “Giving someone a new start at life — costs less than you thought, right?” 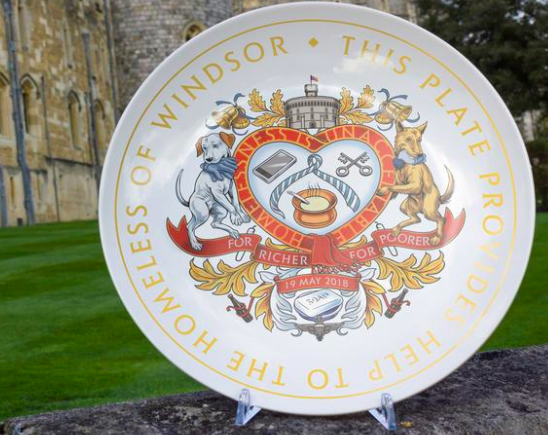 The charity has also joined forces with philanthropic greetings card company called thortful, to create two designs of celebration cards. The cards will be sold on the day by Windsor’s homeless population, as an expected crowd of up to 100,000 people descends on the town.

Read more: 5 Issues We Want Meghan Markle to Tackle as a Royal

Given the media spotlight on homelessness in Windsor, and the council’s former controversial comments on the issue, there are lots of reports circulating on social media this week about what the situation is for homeless people now in the town.

Police are clearing out the Windsor homeless community before the royal wedding 😮 https://t.co/LDAKgaLuxB

The Windsor Homeless Project released a statement on Wednesday describing this as “ridiculous non-reporting.”

“I can tell you that last week all of those that are having to bed down in doorways were approached and asked if they would like their belongings to be stored in a safe place over the wedding period as EVERYBODY will be bag searched as the security rises and it will become an annoyance at the very least,” the charity said in a statement on Facebook.

Read more: Ahead of Royal Wedding, UK Official Calls for Homeless People to Be Forcefully Removed

“The majority (all bar one) agreed that their stuff would be better in storage,” it said. “Absolutely NOBODY has been told that they cannot carry their belongings with them, all that has been said is that ANYTHING that is left in the street ie. bags etc, may by taken away by out-of-area police that do not know which item belongs to whom.”

“In the same way as if you or I left a bag unattended in front of a shop, it would be checked for safety and discarded in such a high security situation,” the statement continued. “We and [Thames Valley Police] work very closely and extremely hard to ensure the homeless contingent of Windsor are as safe as they can be and misreporting does absolutely nobody any favours.”

Homelessness in Windsor has served to bring greater awareness to the issue across the nation as a whole. The population of rough sleepers in the town is about 10 to 15 people at any one time but, as Murphy James from the Windsor Homeless Project said, “if we have one person live-in on the streets then it’s a problem and it needs sorting.”

Harry and Meghan previously named the homelessness charity Crisis as one of seven organisations that they would like donations made to in lieu of wedding gifts.

“The fact that the royal family has chosen to highlight this issue and Crisis particularly… is a massive opportunity to make sure the public understand what’s causing it and the fact that we can solve it,” said Crisis chief executive Jon Sparkes.

Sparkes told the Thomson Reuters Foundation that rough sleeping is expected to rise by 76% in the next 10 years if the government doesn’t intervene.

Parliament passed the Homelessness Reduction Act last year, with the aim of increasing local councils’ obligations towards homeless people, and with the target of building 300,000 new homes a year by the mid-2020s, to take the pressure off the UK’s housing.

Global Citizen campaigns to achieve the UN’s Global Goals, which include action on creating sustainable cities and communities and providing access to adequate, safe, and affordable housing for everyone. You can join us by taking action on this issue here.