Meet the Liberian Surfers Who Are Turning War Ruins into Art

A collective of artists has launched "The Liberia Project." 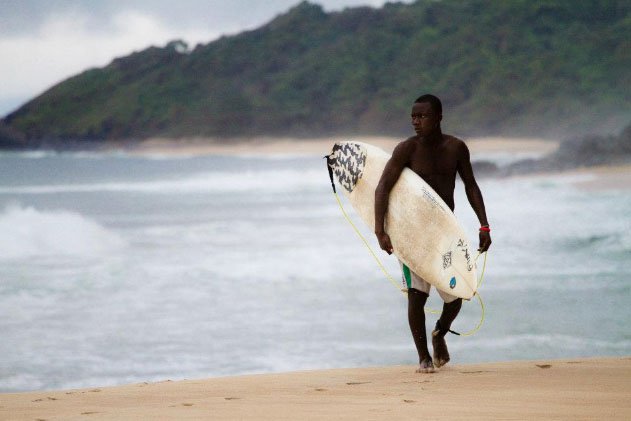 By the side of a dirt road in the Liberian countryside, a young man in a tank top descends the ladder of a rusted water tower, some 80 feet in the air. In board shorts and flip flops, he looks like he’s just come from the beach. But he has a template in his hand and a paint bucket hanging from his shoulder. As he descends the ladder, a brush jangles inside the bucket.

Above him, where there was once only rust, a white, symmetrical design now lives at the tower’s peak. It’s unfinished, and we’ll never see the completed design — a graffiti piece by the German artist called 1010 — on this canvas; the decrepit water tank’s floor fell away while its painter was up there, forcing him back to solid ground.

And its painter isn’t the artist called 1010, but rather Alphanso Appleton, a local, a surfer, and now an activist using graffiti to give his country a meaningful facelift. 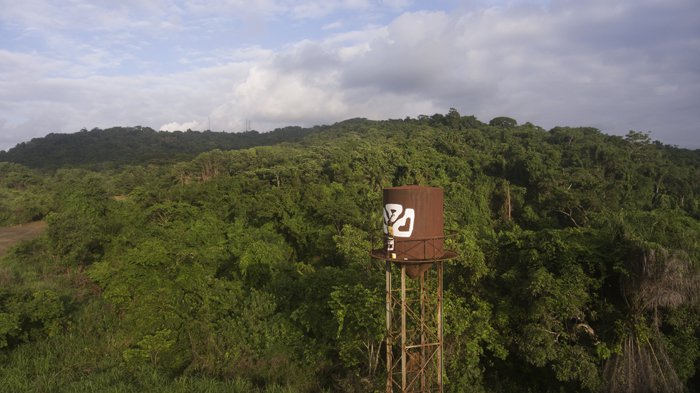 Alphanso Appleton at work on a piece by German artist 1010. Photo: Apartial

Appleton’s painting is part of a first-of-its kind art project that took root in Robertsport, Liberia, in June. It began when a group of locals, who, led by Appleton, repainted internationally acclaimed artwork on war-ravaged spaces around the town. And the project is unique in that none of them are artists — at least, not in the traditional sense.

It’s a growing subculture along the West African coastline, which is the quiet recipient of some of the world’s best waves. In Robertsport, a collective of 15 surfers live and work around the Kwepunha Surf Retreat, a sustainable surf lodge that marries the water sport with an environmental service component.

This June, the surfers directed that service component inland. Together with Apartial, a digital art platform based out of Ireland, they embarked on a massive effort to transform a landscape disfigured by war. They’ve called it “The Liberia Project.”

The ruins of Robertsport, once a rebel stronghold and conflict zone during two Liberian Civil Wars, are a choice canvas. The water tower on which Appleton painted dates to the 1970s, still hangs around as both visual scar and evidence that the country, for a long time, has been in disrepair.

“Prior to the civil war, [Liberia] was a very loving country and a peaceful land,” says Appleton. “But then the war came, people died and a lot of buildings were destroyed.”

Appleton would know – he was born in 1993, at the heart of the first civil war (1989-1997) and was 6 when the second war came around (1999-2003), after separatist rebels invaded from Guinea, which borders the country to the north. Robertsport was a rebel stronghold during the latter.

Eleven years later, Liberia still could not catch a break. The country jumped back into international headlines with the outbreak of Ebola in 2014, an epidemic largely enabled by still crippled civil infrastructure. 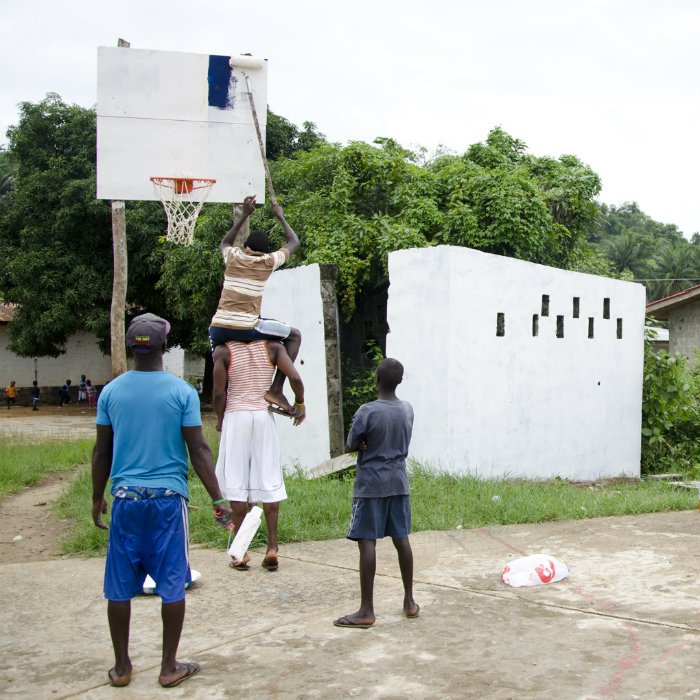 Across West Africa, ebola killed over 11,000 people. Liberia, alongside Sierra Leone, was one of the worst affected. Over 4,800 people died of the disease, according to estimates from the World Health Organization — roughly 45% of people who contracted it. Even today, the country still hasn’t fully recovered from the outbreak, which upended agriculture in the region.

That was when I met Appleton, who was in Ghana at the time and a refugee from the disease. He and another Liberian had come to Accra to wait out ebola, both of them living on stipends from sponsors, both in a kind of anxious, forced, ex-pat limbo.

It was there that he told me about the Liberia Surf Association in Robertsport, Liberia, where he and his colleagues enjoy some of the best waves in the world. The sport has had huge appeal, culminating in several national tournaments, and, most importantly, bringing hope and excitement to the region.

The Liberia Project is an extension of that.

“We wanted to draw attention to Robertsport,” he told Global Citizen via phone, which he certainly has. “It’s important that Africans have a chance to tell their story.” 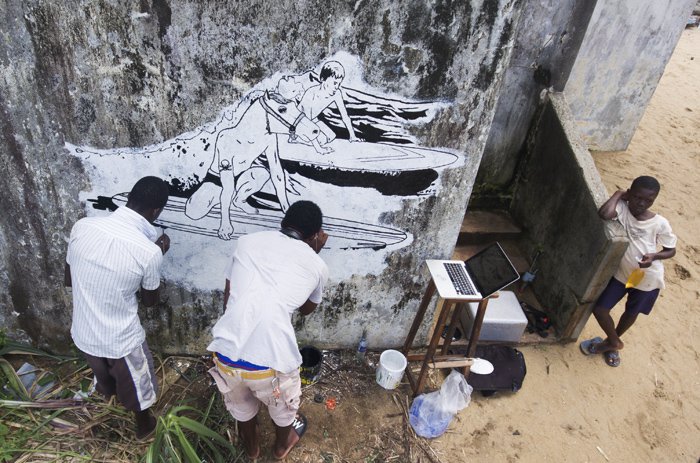 The Liberia Project at work on a piece by Brooklyn-based artists Faile. Photo: Apartial

Using templates of well-known works by Conor Harington, Faile, and Martin Whatson, their crew spent a month repainting Robertsport. It’s a huge departure from the norm for Liberia, a country where youth have long had opportunities limited by war and disease.

“The idea behind the Liberia Project was simply to show a different side to the region,” said Mark Leonard, who works with Apartial and went to Robertsport to implement the project. Apartial helped guide the surfers, sourcing painting templates and co-ordinating permissions with each design's original artist.

Leonard says it was the surfers that made that happen. Indeed, they were the only ones willing to.

“They said the work wouldn't be completed, the surfers wouldn't be able to paint, the locals wouldn't allow it, the region wasn't safe and so on,” says Leonard, who at first had difficulty  getting “The Liberia Project” off the ground while working with local officials. 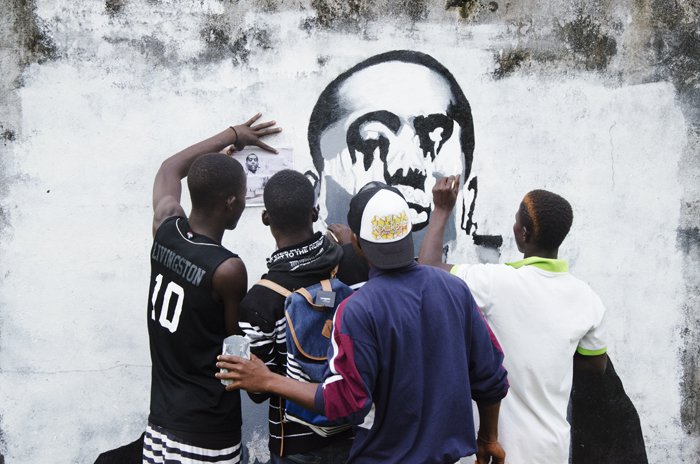 “These predictions couldn't have been further from the truth, as everything fell into place once we brought together the team and described our plans,” he adds. “The only way projects like this will spread is if people refuse to follow the rules of what has been done before.”

By rewriting the rules of Robertsport, the Liberian Surf Association also shifted the community’s expectations, and their “impossible” paintings transitioned from curios to symbols of hope for the healing city.

“At the beginning, people underestimated the entire project,” Appleton says in a video documentary he narrated of the project. “But as time went by, people started to understand what we were doing, and it started to have value. Now, people stop and say, ‘Oh it’s beautiful.’”

The colorful anomalies quickly became popular attractions, as locals came by to admire them. Many took selfies, which quickly turned up on Facebook in people’s profile pictures and cover photos. This press represented small, but significant victories for Appleton, who sees the murals as an emerging point of local pride for the city. 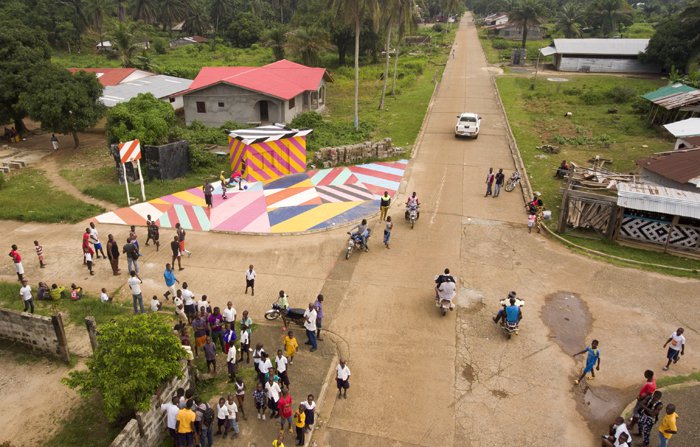 A design from Maser in a Robertsport intersection. Photo: Apartial

“You can use that memory to make something out of nothing,” he says. “You can transform it into something different. If people start experiencing a different perspective, their minds will start to open and understand how beautiful things can be. Even with just a paintbrush.”

That’s as evident in the disfigured canvasses as in the  paintings themselves. “The Liberia Project” looks to the past, directing attention to the country’s ruins, but their paintings are also optimistic, and speak to a better, more hopeful future. 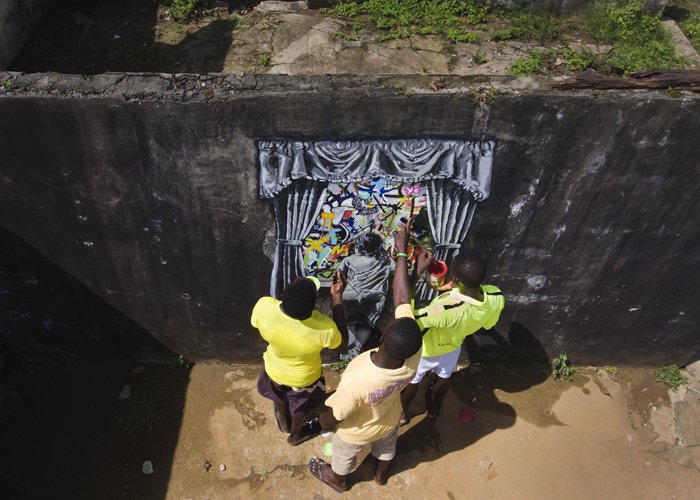 Appleton and surfers at work on a wall that had been in disrepair since the last civil war. Photo: Apartial 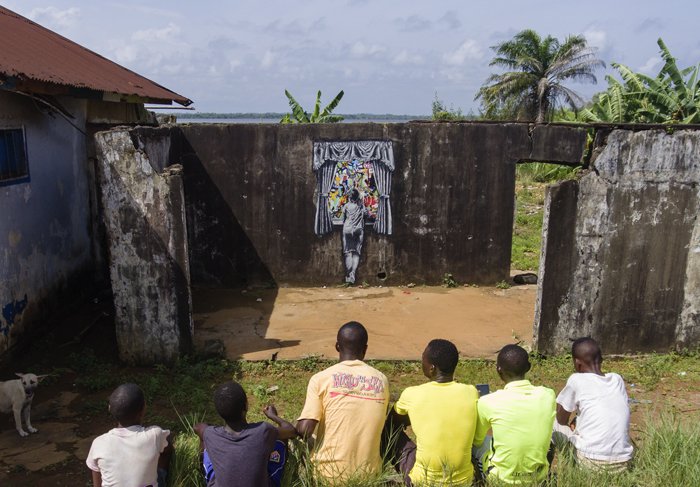 The team admires a piece by Martin Whatson, a Norwegian artist.

“We’re blown away by the work,” says Leonard, crediting Alphanso and his team. “Their energy and positivity allowed us to plan big.”

Which is, ultimately, what brought the ambitious Appleton to the top of that water tower on that day in June, even if the piece by 1010 wound up being finished elsewhere. His first attempt at it will linger there indefinitely, only to be completed, perhaps, when the tower is repaired and safe enough to climb. The image isn't lost on the town of Robertsport, itself a work-in-progress.

But “The Liberia Project” faces forward with relish, which may well be in character for it's wave watching surfer-artists. You have to be optimistic, and you have to be ready when the next wave comes.