Children from deprived areas are seeing their talents going to waste.

The UK government is set to announce a £23 million fund to support bright children from some of Britain’s most deprived areas whose talent might otherwise be “wasted.”

Education Secretary Justine Greening said education has to be “at the heart of social mobility” and that the “overarching ambition is to leave no community behind.”

“The reality is that in modern Britain, where you start too often decides where you finish,” said Greening at a social mobility conference in London on Thursday.

“This is a defining challenge for us as a nation,” she added. “We have talent spread evenly across this great country — the problem is that opportunity is not.”

Take action: Theresa May Is Considering Policies to Win Over the Youth Vote — Let's Make Our Voices Heard

The funding, from existing Department for Education budgets, will go towards the Future Talent Fund, part of the relaunched social mobility strategy.

It’s to tackle the trend of pupils from more disadvantaged backgrounds doing well at the beginning of their school careers, but failing to reach their full potential as they grow older.

The strategy will also including closer cooperation with businesses to improve access to apprenticeships and technical qualifications.

A further £50 million will also be reallocated to support the opening of nurseries in areas without enough childcare provision, to focus on children’s early years.

Read more: These Are the Worst Places to Grow Up Poor in England

Les Ebdon, director of Fair Access to Higher Education, spoke out in favour of the plans.

“Talent is found across the country — from council estate to country estate — and ensuring that your postcode doesn’t act as a barrier to your potential must remain a top priority,” he said.said

The plan also intends to close the “language gap,” that presents an immediate challenge to children from their first day at school.

“We know some children turn up at reception, they’re already behind, and they can’t make the best of their school years,” Greening added. “They can’t understand as well and they can’t articulate as well when they want to communicate with their teacher.”

The announcement comes just weeks after the annual State of the Nation report revealed the UK is facing a “stark social mobility lottery.”

“London and its hinterland are increasingly looking like a different country from the rest of Britain,” said Alan Milburn, who heads up the independent Social Mobility Commission (SMC), which produced the report.

“It is moving ahead, as are many of our country’s great cities,” he continued. “But too many rural and coastal areas and the towns of Britain’s old industrial heartlands are being left behind economically and hollowed out socially.”

The State of the Nation report examined how good a start children are getting in life across England’s 324 local authority areas — and how good their prospects are to empower themselves.

Apart from London, English cities are “punching below their weight” on social mobility outcomes, read the report. No other city makes it to the top 20% of social mobility hotspots.

And this divide has a serious impact on the future prospects of children living in these different areas. 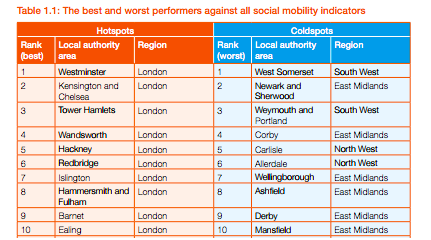 While 51% of London’s children on free school meals get A* to C in English and maths GCSEs, that falls to 36% in all other English regions.

What’s more, while 50% of disadvantaged young people in Kensington and Chelsea go to university, in Hastings, Barnsley, and Eastbourne, that falls to just 10%.

Read more: How a Simple Booklet Is Reducing Violence Against Schoolchildren in Uganda

Greening said at the time that the reports underlines “the importance of focusing our efforts in more disadvantaged areas where we can make the biggest difference.”

Global Citizen campaigns to achieve the UN Global Goals, including zero poverty and quality education. We believe that every child should have the best possible start in life, regardless of where they are born. You can join us by taking action here.