Rohingya refugees who crossed the Naf River overnight make their way through a no-man's land area along the border between Myanmar and Bangladesh, on Nov. 2, 2017.
Roger LeMoyne/UNICEF
NewsCitizenship

Rex Tillerson Calls on Myanmar to Investigate Atrocities Against Rohingya

Tillerson called the violence horrific, but declined to call it “ethnic cleansing.”

On Wednesday, US Secretary of State Rex Tillerson called on Myanmar to investigate the “credible reports of widespread atrocities” committed against the Rohingya people.

According to the United Nations, more than 617,000 members of the predominantly Muslim ethnic minority known as the Rohingya have fled violent conflict in Myanmar since Aug. 25. Global Citizen’s timeline of the crisis details how the violence has dramatically escalated in recent months.

During his visit to Myanmar, Tillerson met with the Southeast Asian nation’s de facto leader Aung San Suu Kyi and Senior General Min Aung Hlaing, commander of its armed forces — which the UN has accused of systematic sexual abuse and indiscriminate violence against the Rohingya.

Take Action: Stand with Refugees. Raise your voice for a world that is open, equal and fair - for all people, everywhere.

Tillerson urged both Suu Kyi, who heads Myanmar’s civilian government, and Min Aung Hlaing to put an end to the violence and investigate the allegations, the New York Times reported. His call to action came just days after the Burmese army released the findings of its internal investigations into the accusations of violence against the Rohingya, which absolved its security forces of all wrongdoing, according to Reuters.

The “scenes of what occurred are just horrific,” Tillerson said in a press conference on Wednesday. The Secretary of State pledged $47 million in aid for the Rohingya refugees on behalf of the US during his visit, CNN reported.

"What we know occurred in Rakhine state ... has a number of characteristics of crimes against humanity," Tillerson said. Yet he notably declined to call the military’s violent campaign against the Rohingya “ethnic cleansing” as some UN officials, and most recently UK Prime Minister Theresa May, have.

"Whether it meets all the criteria of ethnic cleansing we continue to determine ourselves," Tillerson said.

He was joined during the press conference by Suu Kyi, who, in a response to a question, said, “I don’t know why people say I’ve been silent [on this issue].” She also addressed the widespread criticism of a speech she gave on the Rohingya crisis in September, saying “What people mean is what I say is not interesting enough … My statements are not meant to be exciting, they are meant to be accurate." 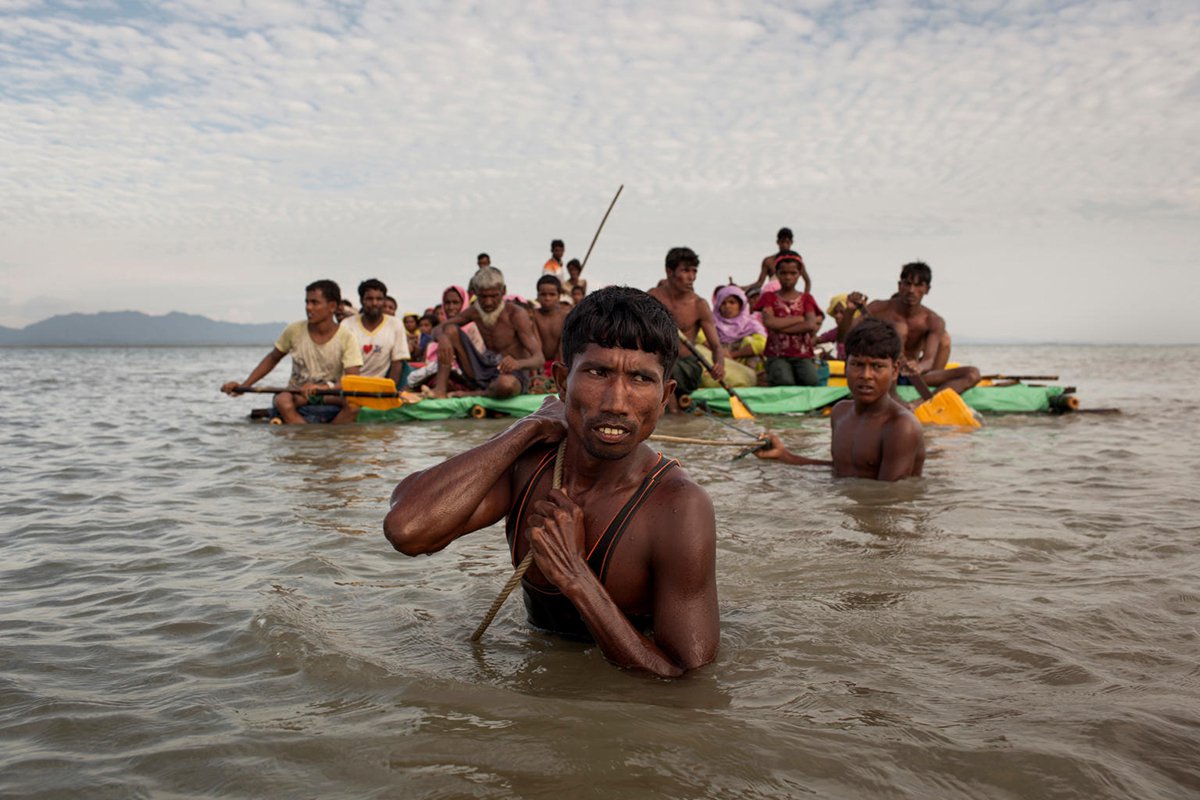 Rohingya refugees use rope to pull ashore a makeshift raft made of logs, bamboo poles and jerrycans across the Naf River, at the border between Myanmar and Bangladesh, on Nov. 12, 2017.
Image: Patrick Brown/UNICEF

Suu Kyi and the government of Myanmar have been accused by politicians, experts, and rights groups of neglecting the ongoing crisis. Following her September speech, Amnesty International said Suu Kyi was “burying her head in the sand” by ignoring the violence.

By its own admission, the Myanmar government has not dispatched investigators to Bangladesh to hear the accounts of the Rohingya refugees now living there, the New York Times reported.

In the meantime, hundreds of thousands of Rohingya refugees remain in overcrowded camps in Bangladesh. Many are suffering from malnutrition and are at risk of contracting illnesses and being trafficked, the UN has warned. As more refugees arrive daily, humanitarian aid organizations struggle to adequately meet their needs.

Global Citizen campaigns for freedom, for justice, for all. You can take action and stand with refugees here.