By Imogen Calderwood  and  Carmen Singer

By Imogen Calderwood  and  Carmen Singer

Why Global Citizens Should Care
The UN’s Global Goals call for an end to violence everywhere, and specifically work to protect children from abuse, exploitation, trafficking, and violence. Children who are recruited into armed groups, including those whose roles didn’t directly involve fighting, need proper support and reintegration when they return home in order to get their lives back on track. Join us by taking action here to support children in conflict zones.

Before Grace* was recruited into conflict in South Sudan, she lived with her mother and younger sister in Ikpirabe, Yambio.

Her father, a soldier, had left home before the war started. But Grace was in school, and used to help her mother sell Tamer — crushed and rolled cassava — by the roadside on weekends. When she had time, she went to church.

But one day, in 2015, her mother came back from the roadside where she had been selling Tamer, and said that the war was coming.

“We packed our things and ran to the bush — we spent six days there,” Grace, now aged 13, told Child Soldiers International, in an interview provided to Global Citizen.

“We came back and I returned to school, but then the war started again so we left for the garden [farming plot] we had in Asanza, and stayed there a couple of months before coming back home,” she continued.

The third time the war came, Grace and her family went to another farming plot in Bawu for safety and where her mother could try and earn some money by farming. 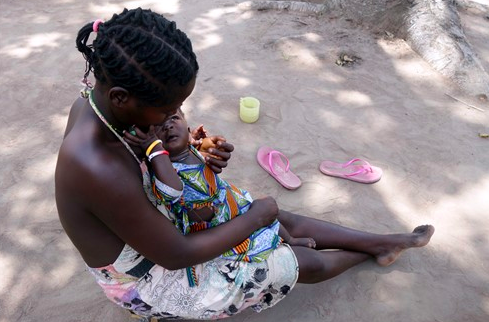 "My mother was digging in the garden when a man came and asked for water,” she said. “She gave him water, then he asked for work, so she let him dig. When she looked away he signalled to someone in the bush. Five men in uniform with guns came out. They told us to sit down and said they would train us to become soldiers.”

Aged 10, Grace was abducted by the SSNLM [opposition forces in South Sudan] along with her mother and 4-year-old sister.

“I was not so scared because my mother was with me, but I didn’t like when they sent me to steal people’s things,” she continued.

When Grace and her family arrived at the camp, there were lots of other girls there too, she said, many of whom she already knew.

Related Stories Aug. 24, 2018 Save the Children UK These Illustrations by Rohingya Children Depict Violence No Child Should Ever Have to Face

“We were divided into groups according to age,” Grace continued. “My mother was in one, and I was in another. We had to build our own Tukul [a mud and branch house].”

“They told us to fetch water and collect firewood. If you didn’t do it quickly they would beat you,” she said. “My mother was cooking in the morning and then went to training in the afternoon, they taught you how to march, how to move your hands and legs.”

“I did not have a gun, but they told me to beat people who refused to do the training,” she added. “They would tie them to trees and then we’d use a certain stick from the bush to beat them. I was so scared. Sometimes it would be an adult but if I didn’t do it they could kill me.”

“Some of the women had husbands, those who didn’t were forced to sleep with the men at night,” Grace said. “I was so small, they [the SSNLM soldiers] only bothered the older girls.”

Our 2017 'What The Girls Say' Report [https://t.co/c1LpvQ6a54] revealed the difficulties experienced by girls coming home from conflict & explored how education and community involvement are critical to improve reintegration.#ChildrenNotSoldierspic.twitter.com/jVfBJlLsam

Grace and her family were forced to stay at the camp for several months, until a peace agreement was signed in early 2016 and then they were finally able to go back to their home in Ikpirabe.

In 2017, Grace heard an announcement on the radio from UN and government officials encouraging children who had returned from armed groups to go to the football stadium in Yambio, where they could receive support.

She went along, and was questioned by officials and then taken with some other girls to a transition centre where she received a medical check-up and spent time playing with other children.

She stayed in the centre for six months, and then returned home in June 2018. Now, both Grace and her younger sister are back in school.

“I like school, it changes my mind,” said Grace. “When I’m studying and playing with the others at school I forget about the bush.”

Related Stories May 31, 2018 More Than Half the World's Children Face Poverty, Conflict, or Discrimination

In the future, Grace “wants to graduate and get a job to help myself and my mother. Perhaps I can be a doctor.”

In South Sudan, where conflict and a collapsing economy led to a famine declaration in parts of the country, more than 19,000 children have been recruited into armed forces and armed groups, according to UNICEF.

Of these 19,000, it’s not known exactly how many were girls — although it’s estimated that it could be almost 30%.

In collaboration with UNICEF, Child Soldiers International (CSI) has learnt that girls in some areas — particularly those leaving groups independently — risk not benefiting from reintegration support, like Grace did, simply because they aren’t known or considered as potential beneficiaries.

Globally, the role of girls in armed conflict has been overlooked, according to CSI. It’s often because girls’ involvement in armed conflict is seen as less direct than boys’, and so isn’t perceived as a threat to communities more concerned with potentially violent boys.

CSI carried out a month-long research trip in September 2018, and collected the stories of 51 former girl soldiers, community members, and NGOs, about the experiences of girls in armed groups and how they cope once they’re back home.

There are several reasons that girls don’t get the support they need to return fully to their communities.

Many girls, for example, were never sent to fight and were made to carry out domestic duties instead — like cooking, cleaning, and carrying equipment — roles that aren't often viewed as association with armed groups by local communities.

Several girls CSI interviewed were taken as “wives” and some suffered horrific abuse.

“When the commander went out, the men would force the girls to sleep with them,” said one 16-year-old, who was abducted by opposition forces in February 2018 and who fled after three moths. “You didn't have a choice.”

Related Stories June 28, 2018 More Children Are Being Killed or Maimed in Conflicts Than Ever Before: UN

Even so, many of these girls aren’t perceived as having been “child soldiers” by community members back home, and so aren’t encouraged to seek support.

“The children of South Sudan are among the most persecuted in this brutal conflict; exploitation by armed groups remains a shocking reality for thousands,” said Sandra Olsson, programme manager at CSI. “Supporting their release and reintegration is an ominous task made even more difficult in such a hostile climate where humanitarian workers have often been targeted by armed actors.”

“However, there is a real danger that many children, especially girls, are being left on the margins of support programmes for children associated with armed groups,” she added. “More needs to be done to help communities and civil society recognise these girls, and to work together to change the narrative around perceptions of a ‘child soldier.’”

“In doing so we can ensure that all children are given appropriate, sustained support to improve their reintegration back home,” Olsson said.

*The names of those involved have been changed to protect their identities.