How a Rainforest Superfood is Helping Support Forest Communities

The ramón nut is empowering communities to support their children's education and health.

This article is contributed in support of Rainforest Alliance.

The Maya Biosphere Reserve (MBR), a five-million-acre stretch of natural rainforest in the Petén region of northern Guatemala, is a protected area that makes up one-fifth of Guatemala’s land area. The ancient pyramids of Tikal National Park, a UNESCO World Heritage Site, stand guard over the forest canopy; monkeys, jaguars, and other precious species roam the forest floor. During the day, scarlet macaws alight on the branches of majestic mahogany trees, and at night, a chirping chorus of hundreds of frogs sing a cacophonous song. 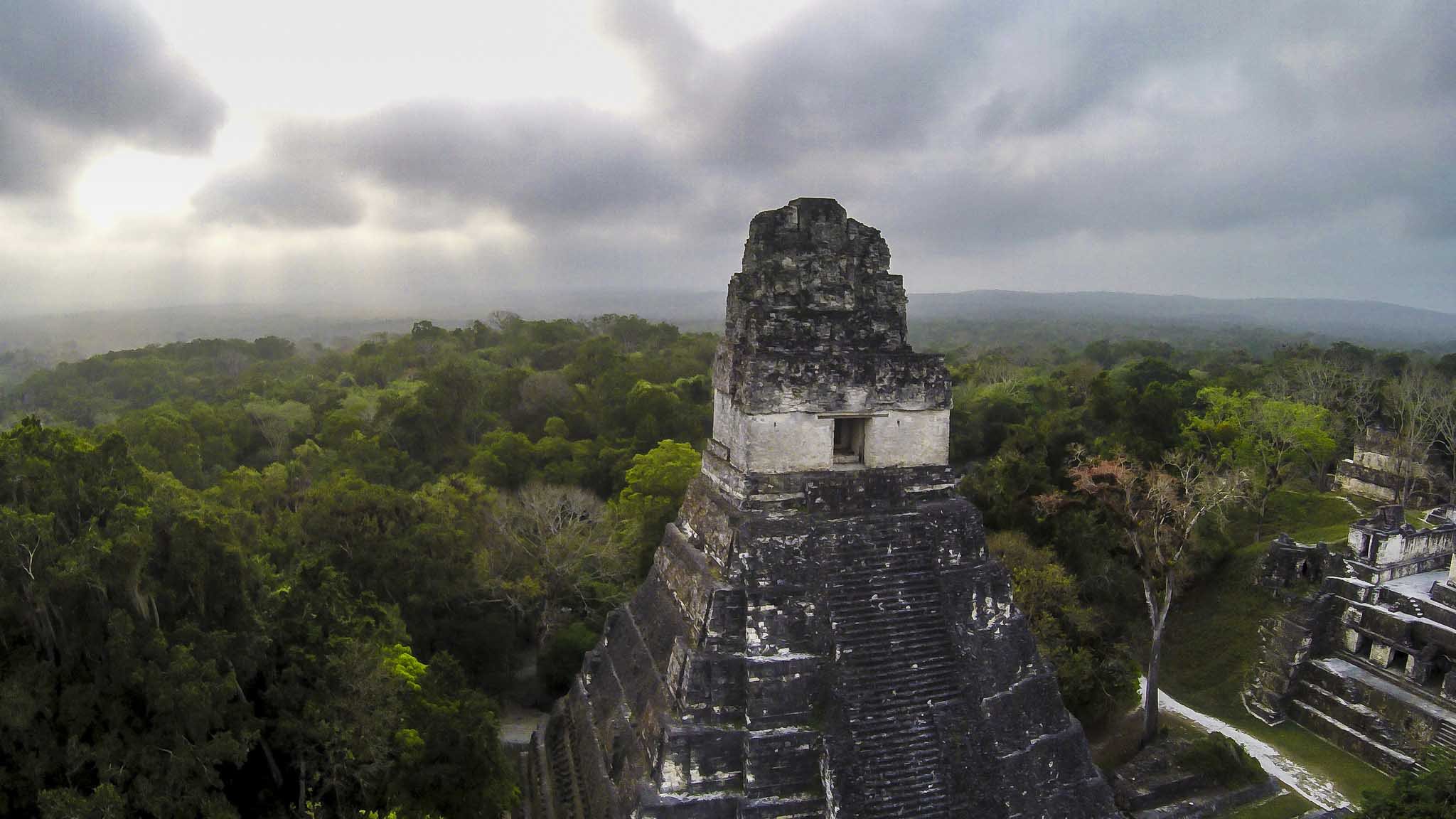 The MBR is the largest tract of contiguous rainforest left in Central America. Besides the thousands of species of plants and animals, the MBR is also home to many communities whose ancestors have lived here for hundreds of years. But in the tropics, vast swaths of forests have been cleared for agriculture, threatening local peoples’ traditional way of life. The destruction of rainforests is also a major contributing factor to climate change, biodiversity loss, and resource scarcity.

For these and even more reasons, the widespread loss of tropical forests is one of the most important environmental and social issues we face today. But solutions to deforestation must strike a balance between forest protection and sustaining the livelihoods of people who have lived there for generations. About 1.6 billion people directly depend on forests, and we all depend on the oxygen forests transpire, the role forests play in climate stabilization, and the medicines and foods that come from forests. Demonstrating forests’ value, and finding ways that people and the planet can prosper together, is key to preserving one of our most crucial global resources. 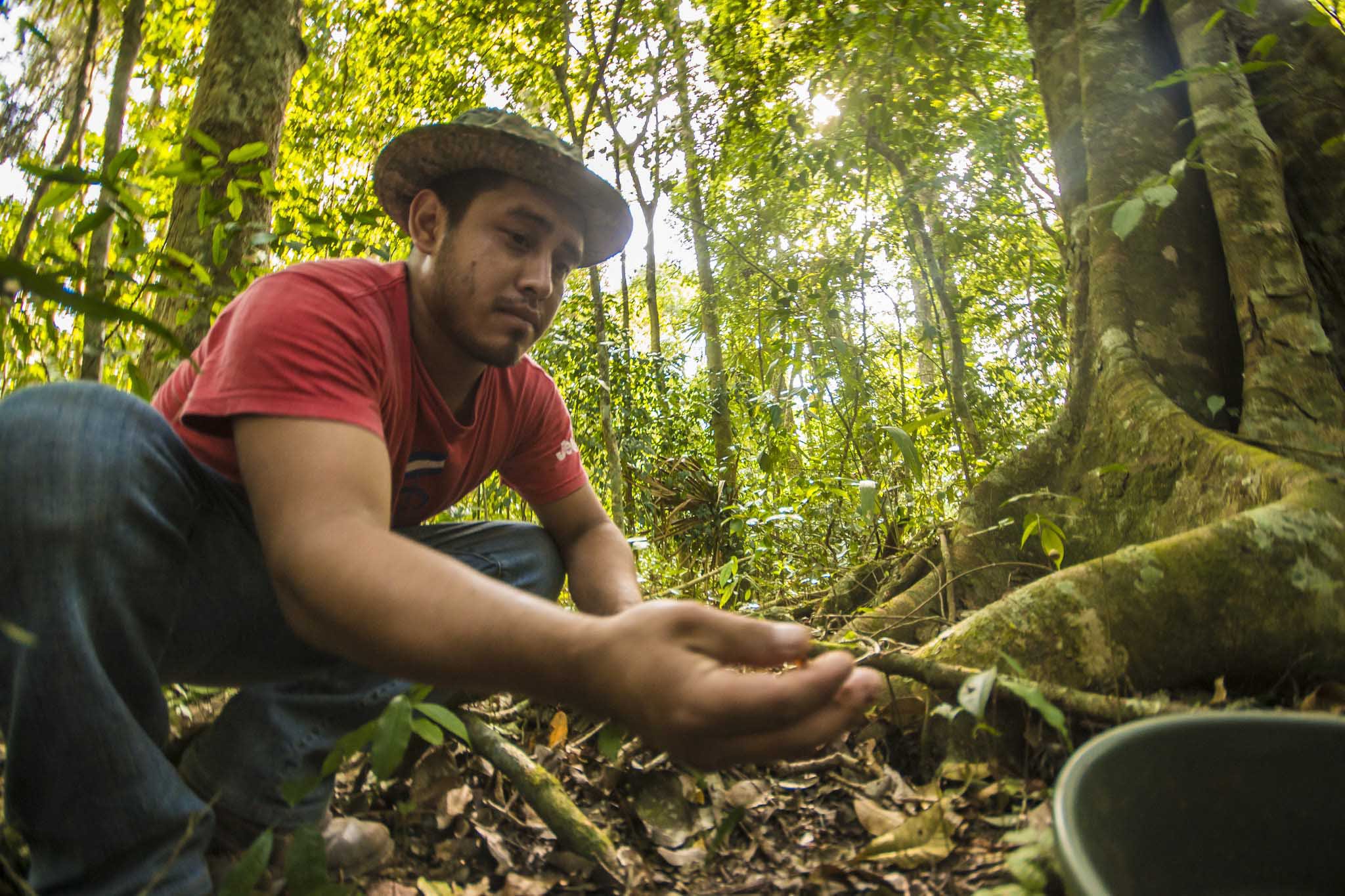 The ramón nut, a nutrient-rich tree seed, once grew in the rainforests of Petén virtually unnoticed.

“We didn’t place any value on the ramón nut; it grew in the forest and that’s where it stayed,” said Grecia Magdalena López, who lives in one of Petén’s rainforest communities. “But now we see that it’s a very important resource—one that brings employment to the women of our communities.”

Also known as the Maya nut, the ramón nut has long been a staple of the local diet. Until recently, it wasn’t perceived to be an economically valuable species: the raw nuts were only eaten during the harvest season when the nuts fall to forest floor, and rarely collected for sale or export. But in the past few years, women from seven local communities attended trainings hosted by the Rainforest Alliance, an international environmental NGO, to learn how to process the nut, roasting and milling to create a vitamin- and protein-rich flour. The roasted nuts can last up to five years without spoiling, invaluable in a region where malnutrition and food insecurity are not uncommon. Suddenly, the ramón nuts that littered the ground were an income stream.

This shift in the way local people view the ramón nut came about because of the Rainforest Alliance, according to López, who is President of the local all-woman Ramón Nut Value Chain Committee. She and other women from communities in the region began attending the trainings in 2012: there they learned to process the ramón nut into flour, which they now sell locally and export (most commonly for use in beverages). Today, the women who sustainably harvest and process ramón nuts are able to contribute much-needed income for their families. Because of this, they have become fierce protectors of the forest ecosystem in which the ramón tree grows. 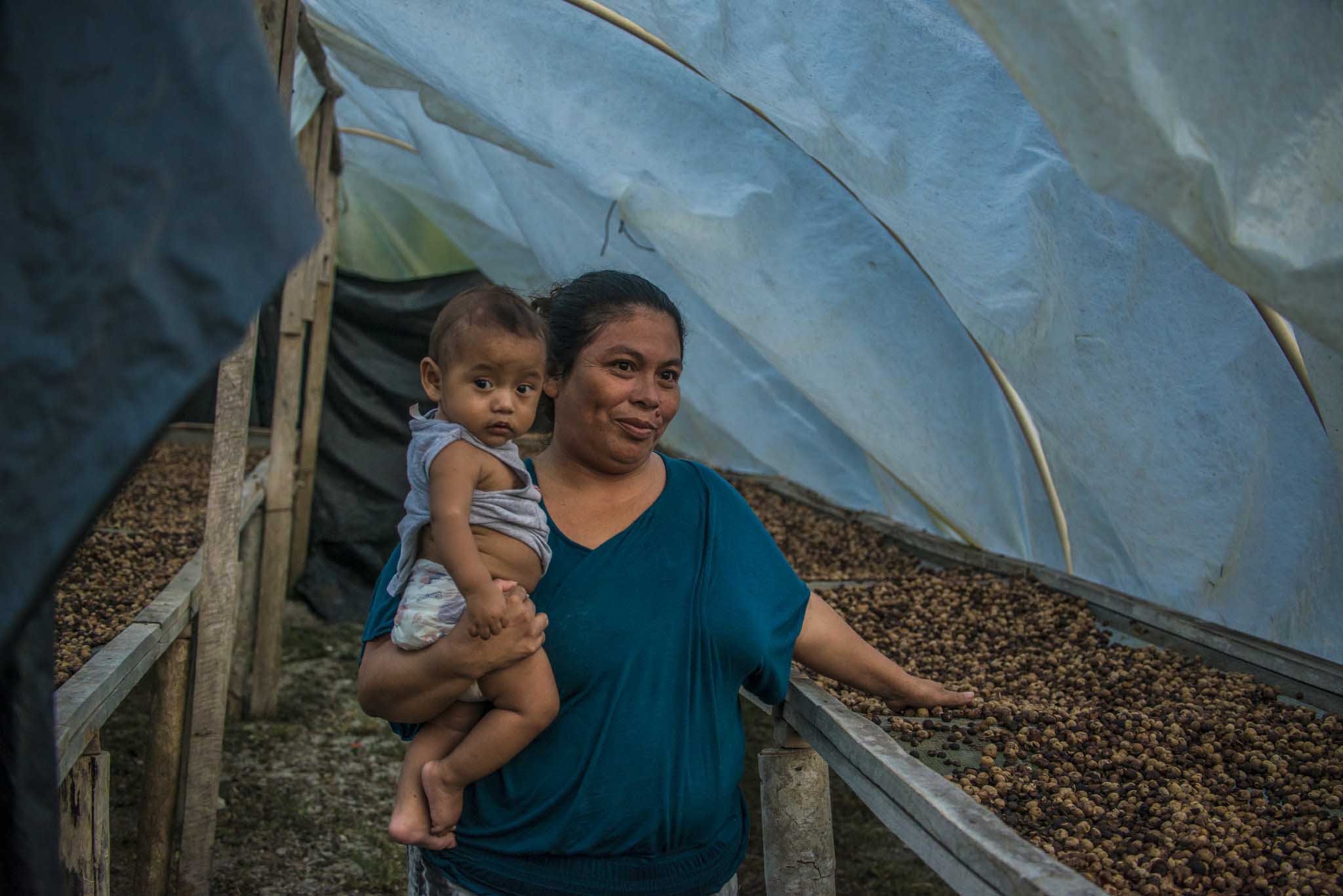 Harvesting ramón nuts is an inherently sustainable exercise. When ripe, the orange fruit wrapped around the raw nut falls to the forest floor. The fruit is edible, as is the raw green nut, and they are an important food source for birds, insects, and mammals. Like all forest trees, the ramón nut tree also provides an array of “ecosystem services:” its leaves transpire oxygen and absorb carbon; its branches are habitat for a web of biodiversity; its roots prevent soil erosion and filter the water that ultimately ends up in rivers and streams. The Rainforest Alliance trainings and the Ramón Nut Value Chain Committee stand apart in a region beset by illegal logging and deforestation—they help people realize the forest is more valuable left standing, than cut down for timber or cleared for agriculture. In the communities participating in the Ramón Nut Value Chain Committee and other similar sustainable forest enterprises, deforestation rates are near zero. Outside these regions, the deforestation rate is about twenty times greater.

“The market currently undervalues tropical forests–this is ultimately why these forests are disappearing,” explained Oscar Rojas, Rainforest Alliance Director of the Climate, Nature and Communities Program in Guatemala. “Developing sustainable value chains for forest products like ramón nuts helps rural people to increase their incomes in a way that does not threaten their forests.”

Individual communities in the area had begun to harvest and sell raw, green ramón nuts some years ago, but it wasn’t until the Rainforest Alliance trainings in 2012, with logistical support from ACOFOP (Association of Forest Communities of Petén), that the women learned to take full advantage of the nut’s value. “We learned to process it—to dry it and make it into ramón nut flour—and to make it into cakes, tamales, soups and hot and cold beverages,” López said. These products fetch much higher prices than the raw nuts. 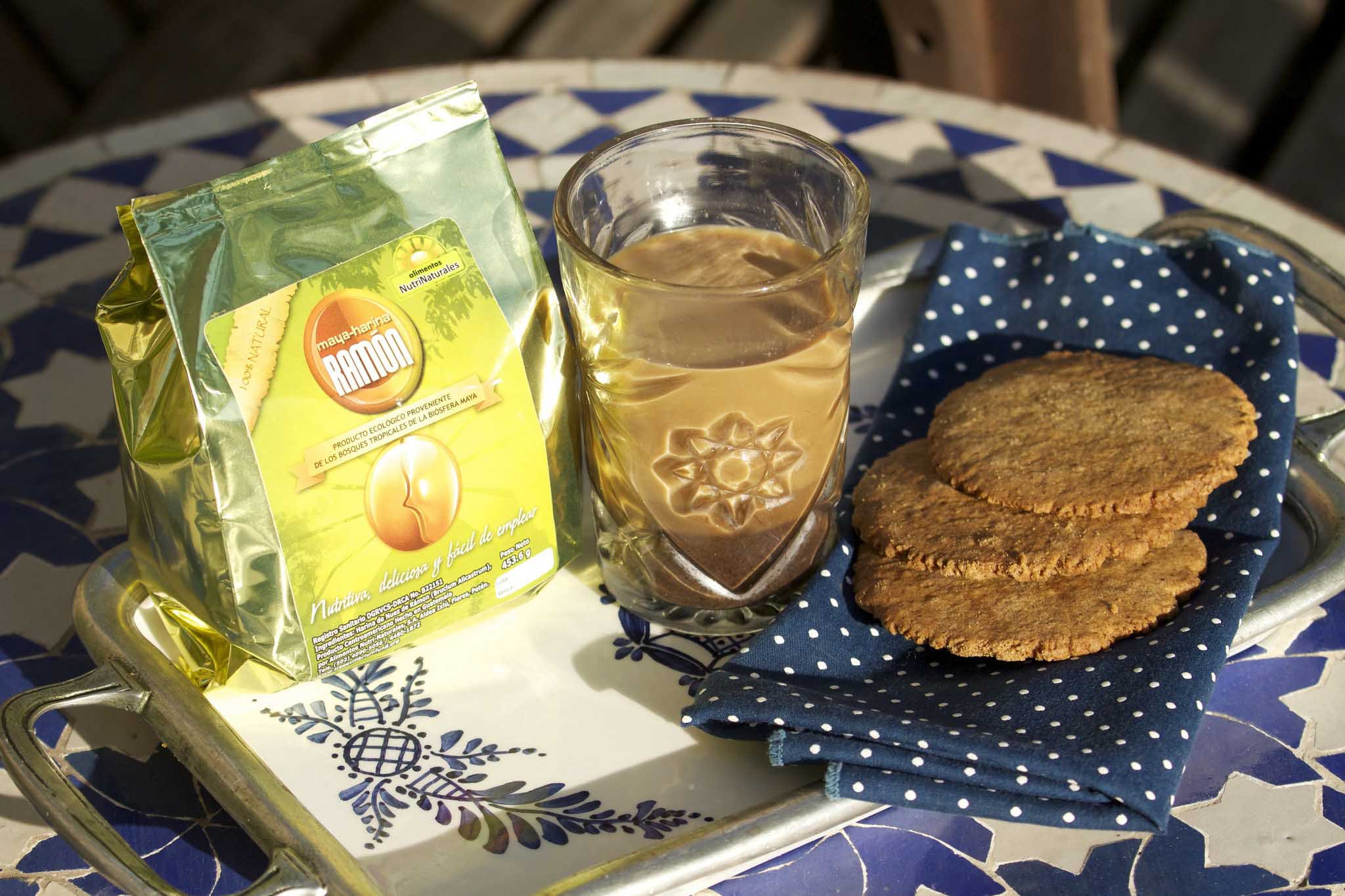 In the workshops, the women also learned about the ramón nut’s nutritional value: it is high in protein, vitamins A, B, C and E, as well as calcium, potassium, zinc, iron, folates, and fiber. Not only do the women use the nut to boost their household incomes, they use it to feed their own families.  “It’s a great supplement for pregnant women,” López said, “and it’s particularly good for women who are nursing, as it provides a lot of nutrients for their babies.”

Now the Ramón Nut Value Chain Committee works as a group to boost incomes and share resources. “When we were selling the raw ramón nut individually, we were paid one Quetzal (0.13 USD) per pound. But once we came together as a committee—that’s why we organized—we started earning three Quetzales per pound. Last year we achieved an even better price of 3.50 Quetzales (0.46 USD) per pound, so we believe that this year we will attain an even better price,” López said. “Another reason we need to work together as a committee is that we know that’s the only way we can afford the machinery we need for processing.”

Rojas points out that the benefits of women working in these communities extend far beyond income. “When you have 60 women in a community of 170 families receiving a steady flow of income from the sustainable harvest and use of ramón nut, a wonderful positive feedback loop begins: greater economic independence brings increased women empowerment, and with it, greater investments in health, education, and women’s participation in decision-making. It is like doubling the community´s development efforts.”

The Ramón Nut Value Chain Committee is now reaching out to others in the region, sharing its expertise in hopes of building an even more extensive infrastructure. “One of our dreams is to create a headquarters, where we could have all the machinery and all the equipment, and that’s where all of our product would be processed,” López said. “There’s a great demand for it.”

For López, the best part about the ramón nut is what it allows the women of the member communities to do for their children. “Because of the training we received, we are able to use the ramón nut to feed our families and to sell. We can support our children—their education and their health—which is our priority.”