It’s a term that he wants to reclaim. 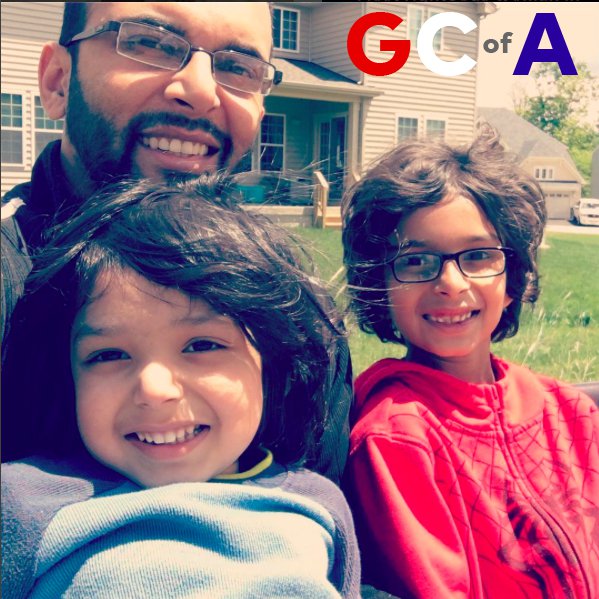 Qasim Rashid with his two sons

Qasim Rashid was 19 when the 9/11 terror attack happened. It was an event that radically altered the US political, cultural, and social landscape.

It was also when he realized that being Muslim in America was going be a lot harder.

“When you’re a young, brown, teenage Muslim with a shaggy beard,” he told Global Citizen. “After 9/11 you kind of don’t have a choice, you’re kind of thrown into [activism].”

In the weeks and months following the attack, the US saw the sharpest surge in hate crimes against Muslims in the country’s history. People were reeling from the horrific event and seething with rage for the perpetrators. In the turbulent aftermath, brown-skinned people from all sorts of backgrounds were lumped together with Al-Qaeda terrorists and attacked.

But amid this outrage, a new era of Muslim advocacy and outreach was emerging.

It would be several years before Rashid seriously entered the realm of activism, but that period helped to inform his sense of purpose.

"In the two years after 9/11 police pulled me over roughly 70 times," Rashid said. "Likewise, the pain of the loss of life of 3,000 Americans, and the loss of life of hundreds of thousands of Afghan and Iraqi civilians, made me realize that fear and bigotry will get us nowhere as humanity."

Nowadays, Rashid is a best-selling author, lawyer, and human rights activist within the Ahmadiyya Muslim Community in America.

And he’s engaging in what he sees as his life’s work: “waging a jihad for peace” or “the jihad of the pen.”

He knows that’s a phrase that will disorient a lot of people but he wants to reclaim “jihad” from terrorist organizations and restore what he says is it’s true meaning.

“It’s been such a bastardized word,” he said. “These terrorists have bastardized the term to mean terrorism and suicide bombing and rape and human trafficking and all sorts of distortions to what Islam actually teaches.”

“The greatest jihad is the struggle for self improvement,” he said. “The struggle against evil.”

He then clarified how the term should be used.

The Ahmadiyya Muslim sect that Rashid is a part of has been working to advance human rights for more than a century, he said.

Through their charity arm, Humanity First, they build schools and water wells around the world, supply relief aid, and promote women’s rights and racial equality.

They also try to build bridges in the US with people of different backgrounds. This has become especially important following the election of US President Donald Trump and the rise in hate crimes that has accompanied his travel bans.

Read More: When a Texas Mosque Burned Down, a Local Catholic High School Had the Perfect Response

Rashid’s sect hosts hundreds of meetups each month across the US for Christians, Hindus, atheists — anybody — to meet local Muslims and have coffee and food and get to know each other.

“By building these bridges of understanding we empower people with knowledge,” he said. “We invite non-Muslims to be a Muslim ally, to stand with Muslims against bigotry.”

They also host a bi-annual called “Religious Founders Day” to invite religious and non-religious leaders to discuss topics such as “how to defeat poverty.”

To Rashid, it’s remarkable how much common ground is found.

“They’re all saying almost the exact same thing,” he said. “We respect differences and appreciates differences, while seeing how much our diversity unites us.”

Rashid has an active presence on social media where he challenges injustice and spreads messages of tolerance.

Ultimately, all global citizens can learn something from his outlook.

“Until and unless you can view humanity through that lens, you’re not in a position to say you’re a global citizen or you care about humanity.”