33 men raped her, then bragged about it. 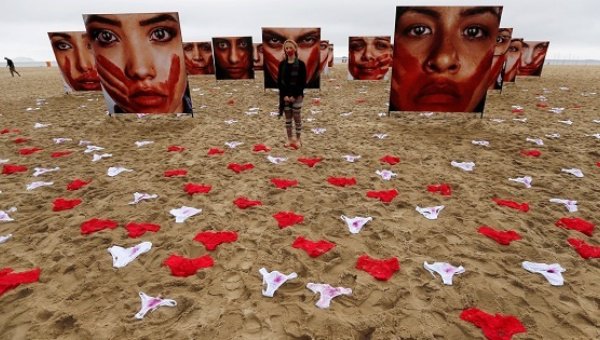 On the night of May 21, a 16-year-old Brazilian girl was repeatedly raped by 33 men in Rio de Janeiro. You read that right. Thirty three men.

Not only did these men show no semblance of regret or remorse, they also bragged about their heinous attacks by posting photos and videos on Twitter.

The assault first became public when a short video of the attack was uploaded, followed by selfies taken by the men with the survivor’s unconscious body.

The survivor came forward, and in an interview released a few days later, she says: "I fell asleep and woke up in a completely different place, with a man under me, one on top of me and two holding me down, on my hands. Many people laughing at me, and I was drugged, out of it. Many people with guns, boys laughing and talking."

“They robbed me, not just in material good, but in a physical way.”

The victim of a gang rape in Brazil speaks out.https://t.co/seaJLxUZaQ

Police have said that they have evidence against four attackers, and are hunting down the remaining culprits.

In Brazil? How are ppl responding to the gang rape case? Enough to affect change? @AJStreamhttps://t.co/w61Cs1Z1qUpic.twitter.com/0DDPL9FrYt

The case has shocked and outraged Brazil, and protests in support of the survivor have emerged across the country.

Brazil's most famous beach is covered in underwear to protest rape & violence against women. https://t.co/LXOi1UCAF6pic.twitter.com/1OFkPnbka1

But defenders of the men as well as some members of the police force have been blaming the survivor, a strong testament to how deep seated rape culture really is.

Countering the persistent victim-blaming narrative by the media, lawmakers, police, and politicians, demonstrations against rape culture have erupted in Brazil.

This Monday, 420 pairs of red as well as red-stained white underwear covered the iconic Copacabana beach. Scattered on the sand were photographs of models each with a bloody handprint covering their mouth. The photographs are part of an exhibit called “I will never be silenced” by artist Marcio Freitas.

Women's underwear is displayed on Brazil’s Copacabana Beach to protest against the gang rape of a 16-year-old girlhttps://t.co/aleOqIWeeT

The protest, staged by NGO Rio de Paz, symbolises the Brazil rape rate of 420 rapes every 72 hours. This number totals to about 50,000 women each year. Many more cases go unreported because survivors as well as the families of victims are scared to come forward.

On its Facebook page, the NGO wrote, “We can’t tolerate the abuse against women. (We’re) giving voice to the voiceless.”

The protest is a jarring representation of rape culture around the world. It brings to light issues of consent, violation of basic rights, and victim-shaming, to name a few. It also fights the normalization of violence against women, including domestic abuse and marital rape.

Recently, protests against femicide and violence against women have swept South America. Thousands marched in protest last week in Argentina condemning the killing of three 12-year-old girls. Demonstrators wore purple wigs to represent the movement #NiUnaMenos, meaning ‘not one less’. Brazilian NGO Think Olga also launched the movement #PrimeiroAssedio, meaning ‘first harassment’, encouraging women to openly discuss their experiences and share their stories of assault and abuse. The hashtag was tweeted and retweeted 82,000 times in 4 days. In April, Mexico City’s streets were witness to a protest against rape culture, with men and women chanting “machismo has to die.”