Baby Justin-Trudeau was named after the prime minister as a thank you from his parents. 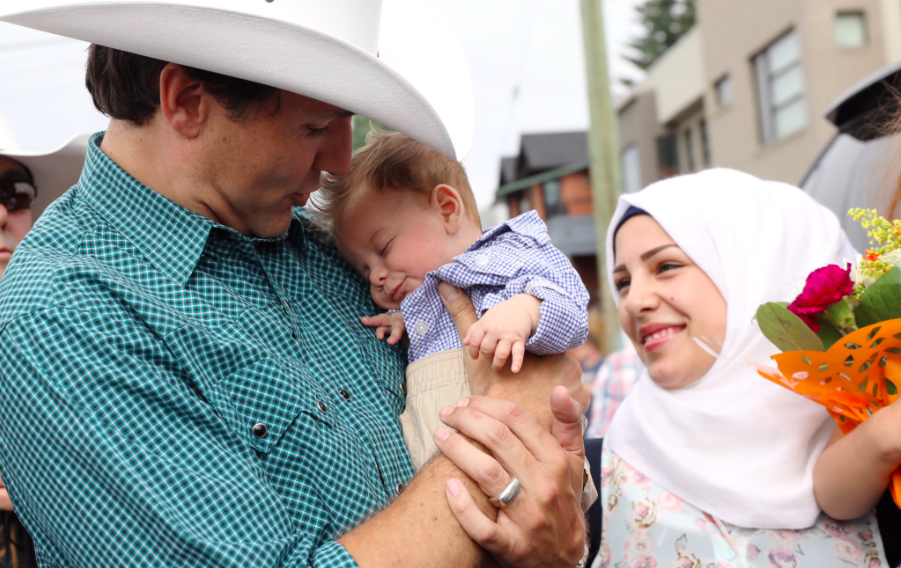 Justin Trudeau was in Calgary over the weekend not only attending Stampede events, but also to meet a special baby — named Justin-Trudeau.

The baby, whose full name is Justin-Trudeau Adam Bilal, was named after the prime minister by parents Mohammed Belal and Afraa Hajj Hammoud, Syrian refugees who settled in Canada in February 2016.

"It was actually very good, it was amazing. I can't believe that I met the Prime Minister Justin Trudeau," Hammoud told CBC.

"He held [the baby] and he said, 'This is Justin-Trudeau,' and then he says, 'I appreciate that you named him after my name.'"

Read More: The Really Amazing Reason This Baby Is Named After Justin Trudeau

Over 40,000 Syrian refugees have arrived in Canada since November 2015, according to the Government of Canada.

It was Trudeau’s decision to welcome these refugees that led the family to Canada.

“He is a really nice man," Hammoud told the BBC back in May. "He helped us a lot. This was a small thank you for bringing us to Canada. We want to thank him and all the Canadian people."

Not everyone in Alberta was as thrilled to see Prime Minister Trudeau in town over the weekend.

For one thing, Trudeau forgot to include Alberta in his Canada Day speech from Parliament Hill. There are also mixed emotions regarding the recent Omar Khadr settlement — the Canadian government awarded $10.5 million to Khadr and apologized to him for the country’s role in his imprisonment in Guantanamo Bay. One perspective is that Khadr received the funds as compensation for abuse he endured while in prison. Because he was charged with the murder of Delta Force soldier Sgt. Christopher Speer, others feel like the payout is an insult to Speer and his now widow, Tabitha.

Still, many were pleased to host the prime minister in Alberta — and baby Justin-Trudeau’s parents were definitely happy to have met the man they named their son after.