Attention water protectors: the fight isn't over yet. 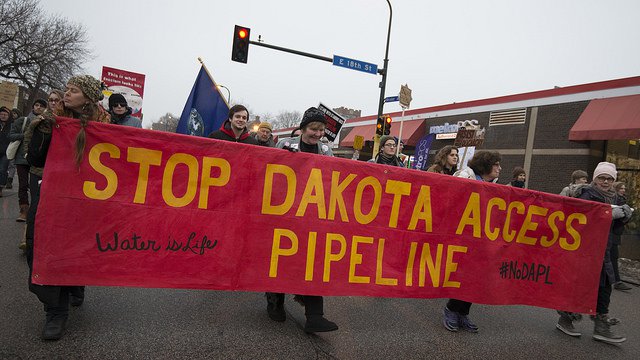 Donald Trump signed executive memorandums today to continue the construction of the Keystone XL and Dakota Access pipelines as part of a greater effort to undo environmental protection policies of Barack Obama.

Read More: Donald Trump Targets Women's Healthcare In One of His First Acts as President

Owned by TransCanada, construction of the 1,200-mile Keystone XL pipeline requires a presidential permit because it crosses international borders. The Obama administration denied the permit, citing the project would undermine the role of the United States as a world leader in combating climate change. Trump’s orders invite TransCanada to re-submit its proposal. The application will be reviewed by the US State Department which will reach a decision within 60 days.

“We’re going to renegotiate some of the terms and if they’d like, we’ll see if we can get that pipeline built. A lot of jobs – 28,000 jobs – great construction jobs,” stated Trump before signing the orders.

The State Department, however, estimates the Keystone pipeline would create 35 permanent jobs, according to a 2014 report. The project would create 42,000 jobs over two years (3,900 of them in construction) but they would all be temorary.

In a victory for the “water protectors,” the $3.8 billion project came to a halt when the US Army Corps of Engineers denied a permit to drill under the Missouri River. This however, simply meant the pipeline would need an alternative route. Now, with Trump’s action the pipeline has been given new life, and one that continues to stoke a nationalist message.

Many environmental activists have vowed to contest further construction, but the task will be much more difficult this time around.

The Trump administration has already handcuffed the Environmental Protection Agency and Republican lawmakers have been hard at work on legislation that specifically targets peaceful protests. A bill in North Dakota, for instance, submits that, “a driver of a motor vehicle who negligently causes injury or death to an individual obstructing vehicular traffic on a public road, street, or highway, may not be held liable for any damages.” This means if the bill passes, motorists will be allowed to run over and kill protesters who are blocking a roadway as long as it’s an accident.

Trump’s orders open the door for further pipeline construction but they are not mandates. It’s going to be an uphill climb, but the fight for the environmental soul of the US is far from over.