The world seemed to be in turmoil this week as the Rohingya continue to flee violent conflict, Puerto Rico struggles to recover, and natural disasters struck southern Europe — but it was not without hope, as India light up in celebration of Diwali and Raqqa, Syria was liberated from ISIS.

Protestors in the United States condemned the Trump administration's "dangerously flawed" travel ban which will mainly affect citizens from Muslim-majority countries, while Rohingya and Iraqi refugees, displaced by conflict and oppression, searched for safety.

Wildfires burned in both California and Portugal, while heavy rain flooded southern Spain. And in Puerto Rico, many still lack electricity and clean water, but are working to rebuild their homes and communities weeks after hurricanes devastated the island.

Catalonians filled the streets of Barcelona, Spain to demonstrate for independence and India celebrated Diwali, the Hindu Festival of Lights, with firecrackers and prayers. And in Raqqa — the capital of ISIS' self-proclaimed caliphate — Syrian Democratic Forces and Kurdish fighters battled ISIS militants, successfully reclaiming the city.

2) Syria: A member of the Syrian Democratic Forces (SDF), backed by US special forces, looks out from a building at the frontline in Raqa on October 16, 2017 in the Islamic State (IS) group jihadist' crumbling stronghold. US-backed fighters battled hundreds of Islamic State group jihadists holed up in the last pockets of Syria's Raqa, as the former extremist stronghold stood on the verge of capture. 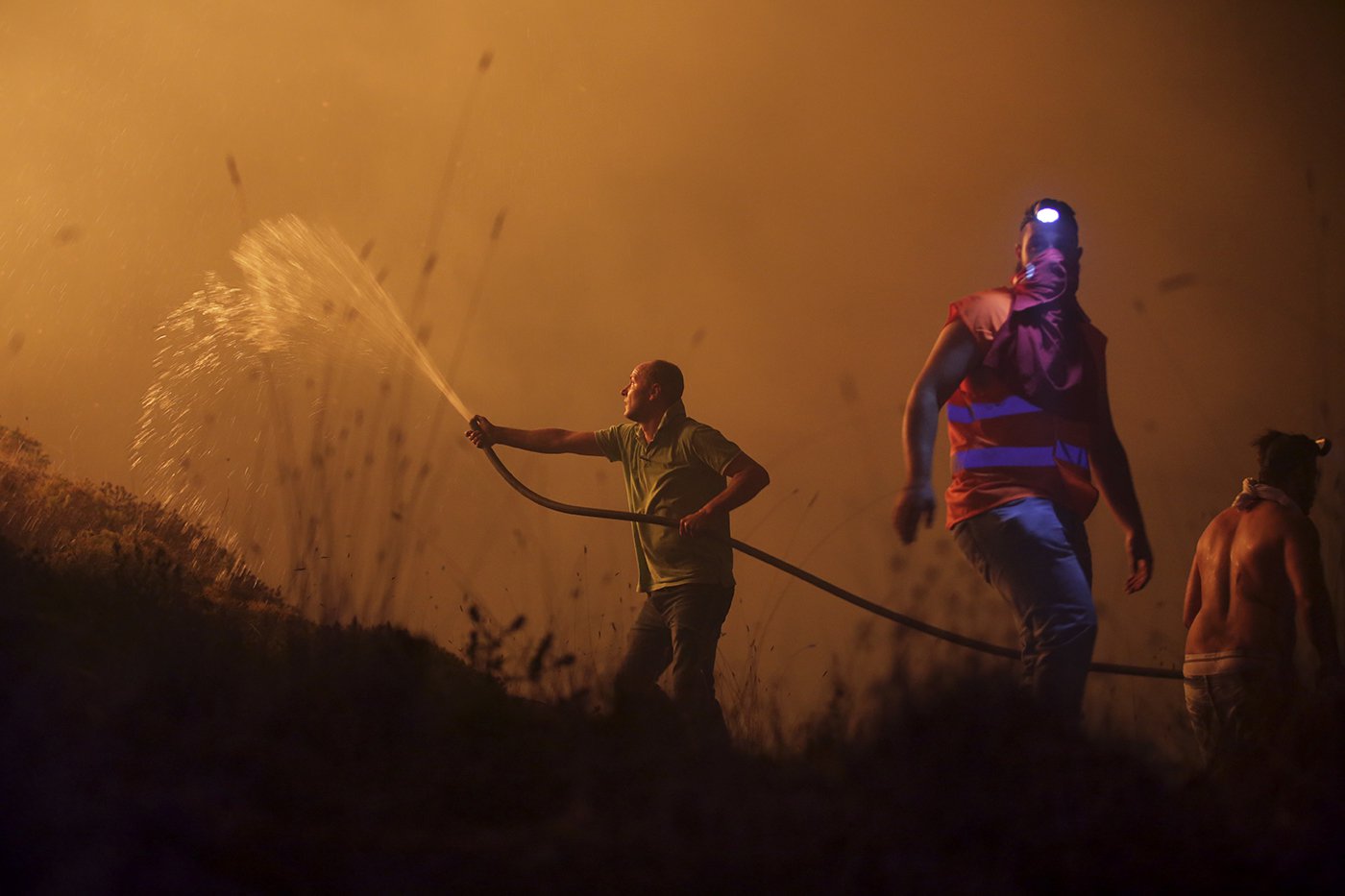 3) Portugal Wildfires: Volunteers use a water hose to fight a wild fire raging near houses in the outskirts of Obidos, Portugal, in the early hours of Monday, Oct. 16 2017. At least six people were killed Sunday as hundreds of forest fires spread across Portugal fueled by high temperatures, strong winds and a persistent drought.

4) California Wildfires Aftermath: Charred property is seen before a home that was untouched by the fire in Santa Rosa, California on October 15, 2017. The death toll from California's wildfires rose to 40, October 15, 2017, but firefighters reported progress in battling the flames, and thousands of evacuees were gradually being allowed to return home. The wealthiest US state regularly faces late-summer fires. But the blazes which have burned more than 217,500 acres (about 88,090 hectares) this month, and devastated the winemaking areas of Napa and Sonoma, proved the deadliest in the state's history. Almost 11,000 firefighters from various states are in action against the California blazes. 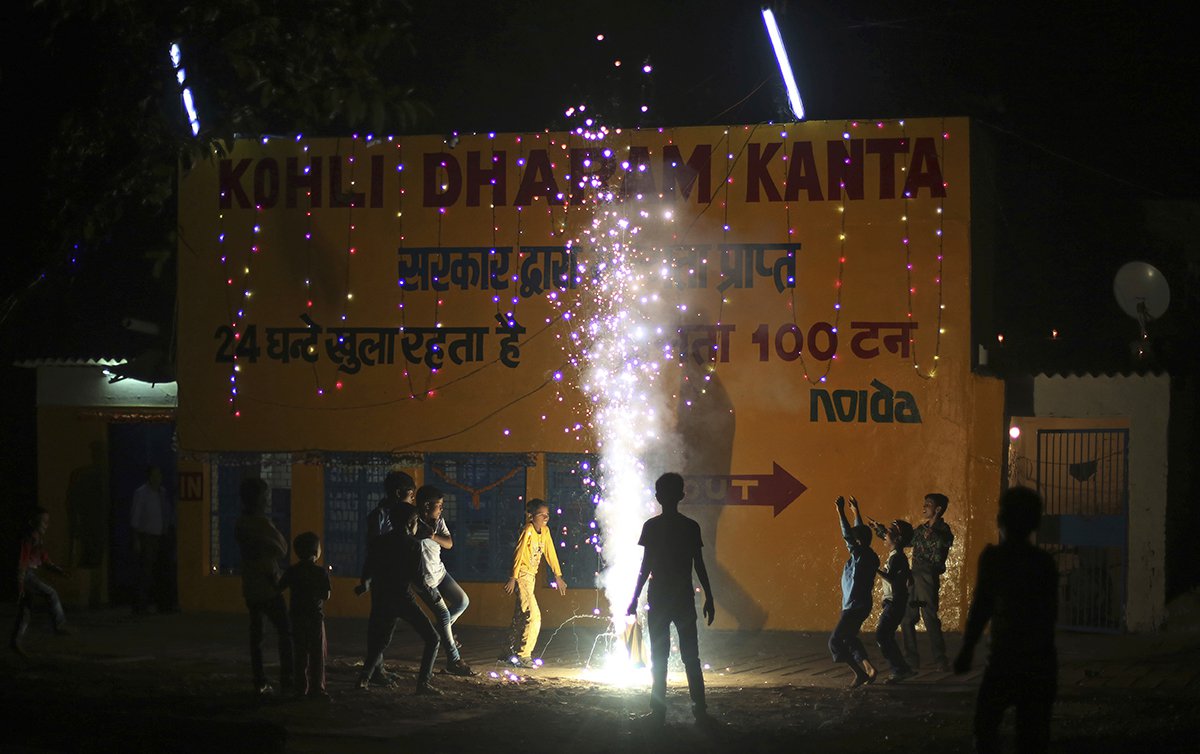 6) US Travel Ban Protest: A man holds an American flag during a protest against the Trump administration's proposed travel ban, October 18, 2017 in Washington, DC. Early Wednesday morning, a federal judge in Maryland granted a motion for a preliminary injunction on the administration's travel ban. This is the Trump administration's third attempt to restrict entry into the United States for citizens from mostly Muslim-majority countries. The Department of Justice said it plans to appeal and the White House issued a statement calling the judge's decision 'dangerously flawed.'

7) Kurdish Fighers: Kurdish female fighters of the Syrian Democratic Forces (SDF) gather during a celebration at the iconic Al-Naim square in Raqa on October 19, 2017, after retaking the city from Islamic State (IS) group fighters. The SDF fighters flushed jihadist holdouts from Raqa's main hospital and municipal stadium, wrapping up a more than four-month offensive against what used to be the inner sanctum of IS's self-proclaimed 'caliphate'.

8) Rohingya Refugees: A Rohingya refugee woman waits for permission from the Bangladeshi army to continue, after crossing from Myanmar, in Teknaf, Bangladesh October 15, 2017.

9) Iraq: A picture taken on October 18, 2017 shows displaced Iraqis, who fled from Hawija in 2014 to Kirkuk, riding in vehicles as they return to Hawija, after the town was retaken by Iraqi forces. 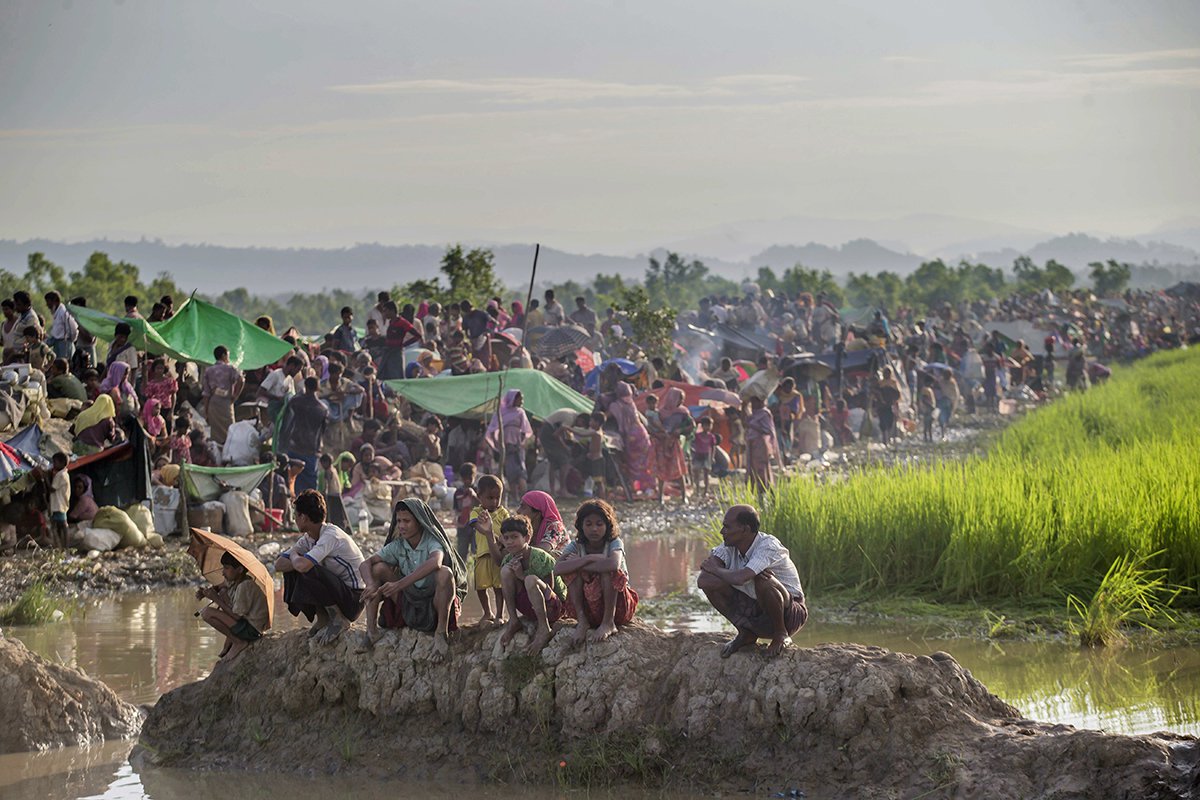 10) Rohingya Refugees: Newly arrived Rohingya Muslims, who crossed over from Myanmar into Bangladesh, rest on embankments after spending a night in the open as they have been prevented from moving ahead towards refugee camps by Bangladesh border guard soldiers at Palong Khali, Bangladesh, Tuesday, Oct. 17, 2017. Witnesses say a new wave of refugees started crossing the border over the weekend. An Associated Press photographer saw thousands of newcomers near one border crossing Tuesday. Several said that they were stopped by Bangladeshi border guards and spent the night in muddy rice fields. 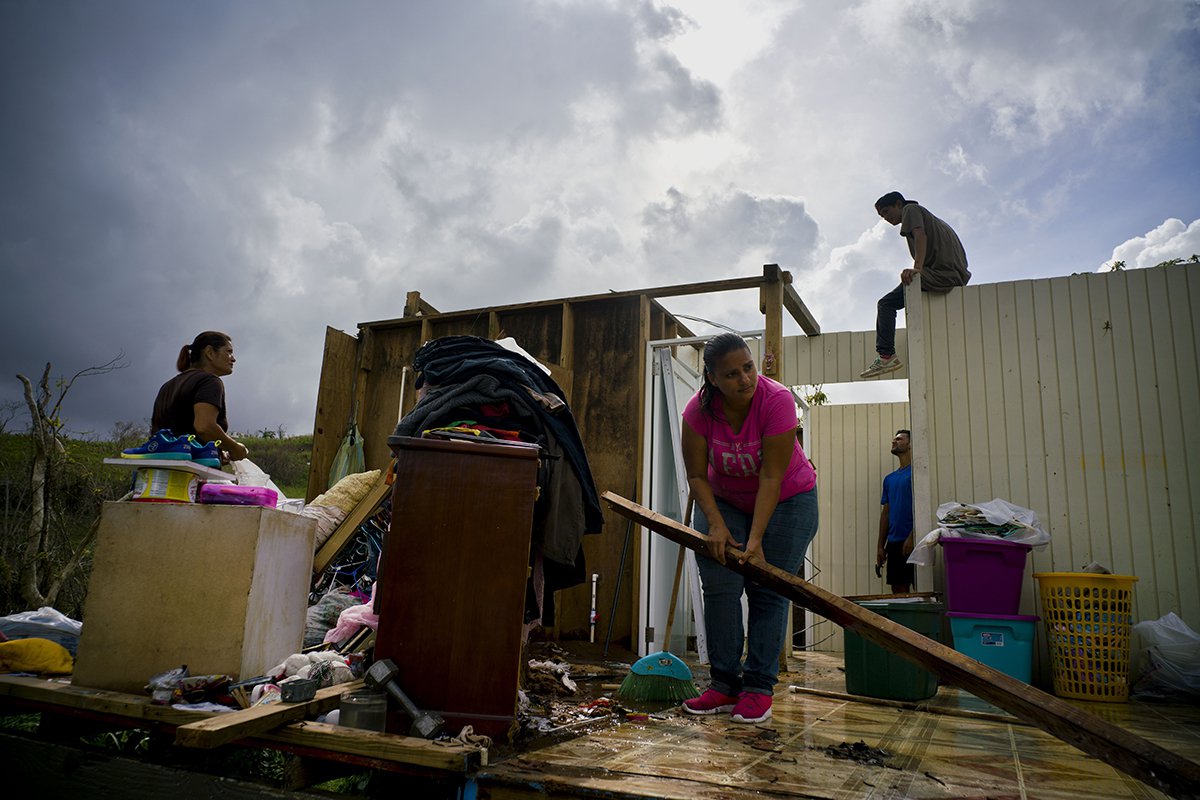 11) Puerto Rico: People try to recover their belongings and start rebuilding their house that was destroyed by Hurricane Maria, in Morovis, Puerto Rico, Saturday, Oct. 14, 2017.

12) Kenya Elections: Supporters react as they are addressed by the unseen Kenyan opposition leader Raila Odinga of the opposition National Super Alliance (NASA) coalition during a rally at Kamukunji Ground in Nairobi on October 18, 2017. 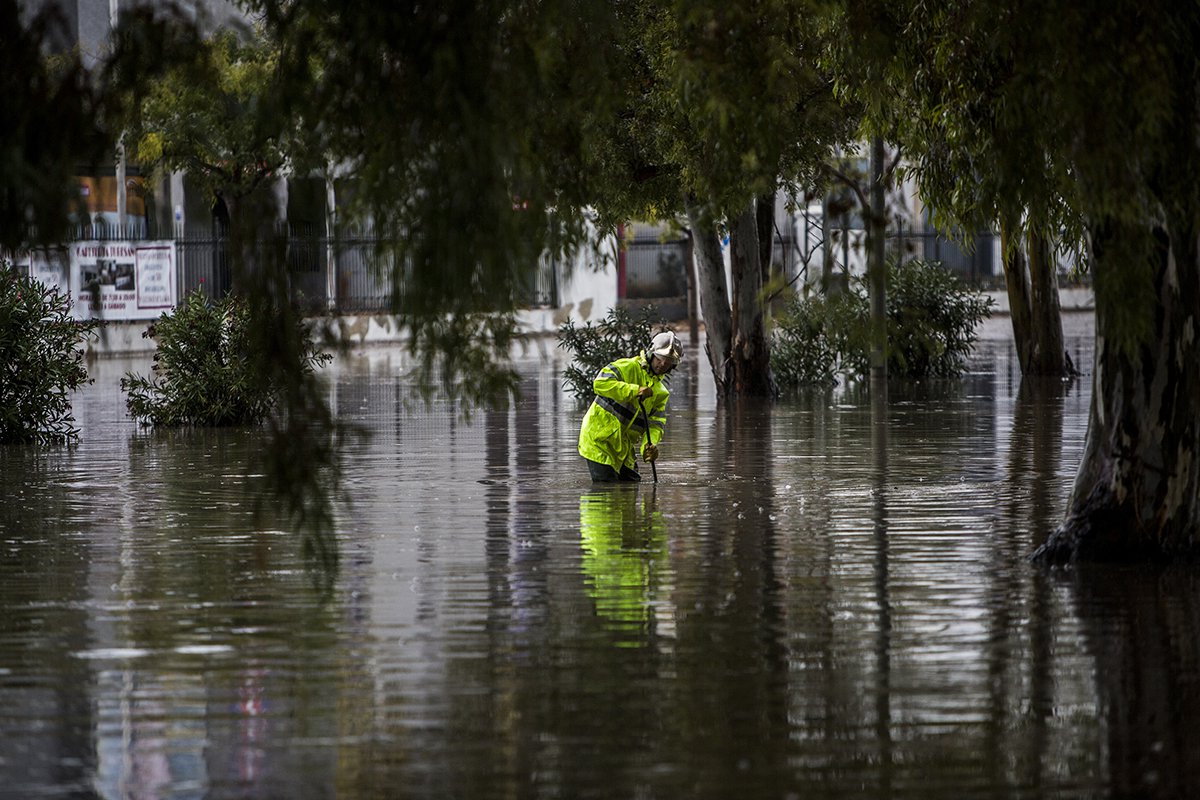 14) Diwali: Sri Lankan Hindu devotees offer prayers during Diwali Festival at a temple in Colombo on October 18, 2017. Diwali, the Hindu festival of lights, marks the triumph of good over evil, and commemorates the return of Hindu deity Rama to his birthplace Ayodhya after victory against the demon king Ravana.