“There are many don’t want to assume responsibility for [refugees] destinies.” 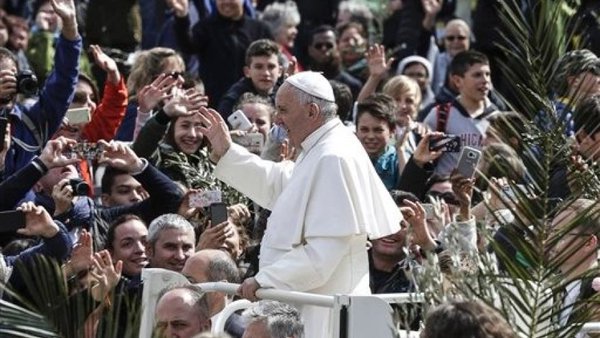 Pope Francis called out Europeans for their indifference toward refugees, straying from his homily text on Palm Sunday.

The Pope drew a parallel to those who denied Jesus justice and “washed their hand and feet” of His fate before the crucifixion, to Europeans today turning their backs on refugees.

The comparison reminds all of humanity that it is the world’s collective responsibility to care for refugees seeking peace from poverty, and violence. Millions of refugees are fleeing violence in Syria and North Africa, streaming into Europe for safety. The crisis has created political and economic impacts felt around the world.

“Jesus was denied every justice. Jesus also suffered his own skin indifference, because nobody wanted to take on the responsibility for his destiny,” said the Pope yesterday.

His Holiness continued connecting to the current and ongoing migrant crisis in Europe stating, “And I am thinking of so many other people, so many marginalized people, so many asylum seekers, so many refugees. There are so many don’t want to assume responsibility for their destinies.”

The world watched the fifth anniversary of the Syrian conflict pass on March 15th this year.  Countries continue to close borders and as the Pope said, many bystanders around the world go on without acknowledging the desperate situation and extreme need for aid and assistance that many refugees face today.

Thousands of refugees are stuck at the Macedonia-Greece border, and remain trapped, unable to move forward physically nor with their lives. 1,500 refugees were sent back to Greece after trying to cross into Macedonia. In the past year alone, over 1.1 million refugees fled conflict, migrating to European Union states.

In this condemnation of the apathetic attitude much of the world has toward refugees, Pope Francis reminds society of the power of shifting mindsets toward compassion for others. Violence, persecution, and extreme poverty is the world’s problem. Each one of us must care in order to overcome these obstacles toward achieving peace for the refugeeand and ultimately for the world through the Global Goals.

Though the Pope has a busy week between Palm Sunday (the celebration of Jesus’s entry into Jerusalem and beginning of Catholic Holy Week) and Easter, let’s hope this message to deepen care and concern for refugees from Syria, Africa, Iraq, and other countries is heard all over the world.

Maybe it will even be brought up again during Pope Francis’s biannual “Urbi et Orbi,” a blessing and message to the Vatican City and the world given on Easter Sunday and Christmas day from the balcony of St. Peter’s Basilica.

Within the Pope’s critique, there is room to construct a better outcome for refugees and a world that will benefit all. This can be done through taking responsibiliy for the Pontiff's message and taking action, however small, like sharing that you care about ending the suffering of refugees.