It won’t be long before Trump calls him a ‘fake Pope.” 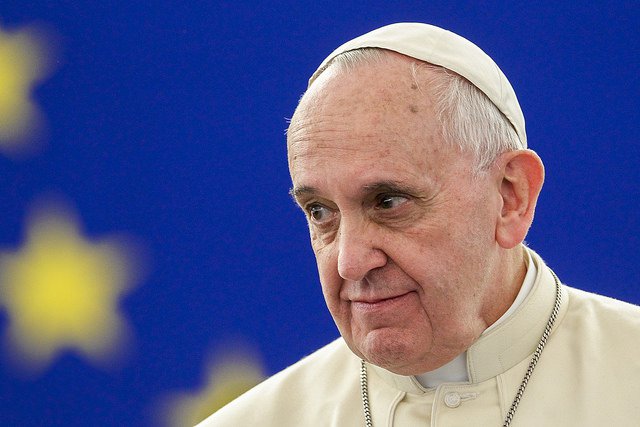 Since his election in 2013, he’s revolutionized the Church’s stance on the LGBTQ community, called for actions to combat climate change and took matters into his own hands to help alleviate the global refugee crisis.

He’s also kept an eye on world leaders like US President Donald Trump with regards to migrants. On Saturday, after President Trump said he'd be ordering another executive order limiting the refugees and immigrants that can come into the US, he tweeted a message referencing one of Trump’s most controversial policies.

How often in the Bible the Lord asks us to welcome migrants and foreigners, reminding us that we too are foreigners!

Read More: ‘I Am Muslim, Too’ Rally Challenges Refugee Ban

The phrase “we too are foreigners” resonates in the United States as a nation that was founded and built by immigrants. As a global power, many believe the US should be responsible for settling refugees, especially when considering the US military has contributed to the 65 million people forcibly displaced worldwide. Opponents cite potential threats to national security.

Pope Francis has been a champion for marginalized people. Last August, he issued a Motu Proprio (a papal order) creating a new department of the Church for "Promoting Integral Human Development: “This Dicastery will be competent particularly in issues regarding migrants, those in need, the sick, the excluded and marginalized, the imprisoned and the unemployed, as well as victims of armed conflict, natural disasters, and all forms of slavery and torture.”

As the debate over how to address the refugee crisis rages on in the US and around the world, Pope Francis continues to be a voice for the voiceless and the nation-less. Here are some of his past tweets in support of refugees:

Children forced to flee, especially if fleeing alone, are most defenceless and vulnerable. Let's pray for them and help them. @M_RSection

Young migrants, especially when unaccompanied, are especially defenceless. Let everyone offer them a helping hand.

I express my solidarity with migrants around the world and thank all those who help them: welcoming others means welcoming God in person!

Today there is an urgent need for politics and economics to be centered on the service of life.

We are living the Gospel when we help the smallest and most vulnerable. #migrants

Beyond Twitter, Pope Francis criticized Trump during his presidential campaign for promising to build a wall along the US-Mexico border. After a visit to Mexico in February of 2016, Francis told a reporter that, “a person who thinks only about building walls, wherever they may be, and not building bridges, is not Christian.”

In which @realDonaldTrump calls the pope "disgraceful." pic.twitter.com/Q3cGxYCZ31

Many joined the dispute on Twitter with the hashtag, #MakeTheVaticanGreatAgain — Trump supporters using it seriously, his critics, sarcastically.

Pope Francis also wrote a message to Trump on Inauguration Day, reminding him of his moral duties as the leader of the free world: “At a time when our human family is beset by grave humanitarian crises, I pray that your decisions will be guided by the rich spiritual and ethical values that have shaped the history of the American people and your nation’s commitment to the advancement of human dignity and freedom worldwide.”

On Jan. 27, Trump signed executive orders shutting down all immigration for 90 days and banning travelers from seven Muslim-majority countries (except for religious minorities, i.e. Christians). Though federal judges struck down the ban, it remains a volatile issue in US politics. Trump stated intentions to take the ruling to the Supreme Court, meanwhile the White House is working on a new order to close US borders.

Whatever executive actions are taken, it’s clear Pope Francis will address them, 140 characters at a time.