How technology will lead to better (and safer) policing

Technology is part of the solution, humanity is the rest.

US police officers kill almost three people a day across the United States. In 2016, US police action has killed over 500 people. Including the five dead police officers in Dallas last night, 58 police officers have died in the line of duty this year, with 36 of them dying in shooting incidents, assaults or during vehicular pursuits. These numbers show an undeniable truth: police activity in the US is deadly. Too deadly.

The police shootings this week of Alton Sterling and Philando Castile refocused the nation on Black Lives Matter, a movement born out of the 2013 acquittal of George Zimmerman on charges of shooting black  teenager Trayvon Martin. The seemingly retaliatory shootings of police in Dallas continued the cycle of violence.

The social, cultural, legal and political fallout of this cycle of violence will play out across the United States. This year is shaping up to be the deadliest for police and victims of police violence in recent US history. This means how policing is done must change.

In many places, police will need to change their attitudes toward the people they are paid to protect and serve. This process is both urgent and will take time. In the meantime, the act of policing can change. And technology will be a big driver of that change.

Body cameras are possibly the most well-known and discussed technological advance to come to policing since the advent of repeater pistols. Body cameras offer a direct view and record of police activities. The concept has been available to some police departments since 2006, though it wasn’t used widely until a large-scale trial in 2012 showed positive results.

In 2012,  The Rialto City police department in California piloted the devices in a large randomized test. The presence of body cameras reduced officers’ use of force by 60% and public complaints by 88%. “When you know you’re being watched you behave a little better,” said Rialto’s Police Chief Tony Farrar in the first year of the program. “As an officer you act a bit more professional, follow the rules a bit better.”

Today, body cameras are becoming almost as ubiquitous as dashboard mounted cameras are in police vehicles. Since the Rialto example went national police departments across the US have adopted body cameras.

Civil liberties groups have raised serious concerns about the idea of being filmed constantly by police officers (a theme present throughout the rise of new police technology). Further, there are concerns that simply recording police interactions will not change their nature. For example, NYPD officer Daniel Pantaleo was not indicted for his role in the chokehold death of black man Eric Garner, despite the incident being filmed on a bystander’s phone.

Body cameras may be the future for all US police but their efficacy in changing behavior across the nation will rely on courts enabling the use of their footage as well as larger behavior change. In many ways this advance has the most potential direct benefit to communities being policed.

The many many uses of an iPad or smartphone:

Phones and tablets put technology like crime mapping, facial recognition, fingerprinting, and background checks in officers’ hands while they’re in the field.  They can also record interviews,  which results in improved witness statements for both defense attorneys and prosecutors

This deployment of technology is among the least controversial on this list. The spread of smartphones and iPads into everyday life makes this easy to culturally accept. Further, these devices simply make an existing activity like interviewing people and filling out paperwork more efficient and verifiable rather than adding new capabilities to police officers.

Automated ticketing systems is more of a change in policy protocols than a massive technology change. Some experts are calling for police to adjust their protocols to reduce unneeded interactions that provide too many opportunities for fatal misunderstandings. Conor Friedersdorf, outlined one of these proposals in the Atlantic today.

“A police officer who sees a car with a broken taillight, or a malfunctioning blinker, should pull it over, park behind it, photograph the license plate, and issue a “fix it” ticket to the registered owner of the vehicle without ever approaching a window or interacting with anyone on the roadside.”

Friedersdor and other proponents acknowledge that some traffic stops, like drunk driving, for instance, would still require in person interaction. That said, with the rise of red light cameras, speed cameras and other automation of fines and “tickets” around the world, it does not seem that difficult for small traffic stops to become less personal.

Police departments across the world use street cameras to monitor areas for criminal behavior. Rights groups found that the UK had one CCTV camera for every 11 people in the country in 2013. While the US is not near that level, it is common to see surveillance cameras in high-traffic and high-crime areas. Other uses for surveillance cameras in the US include anti-graffiti campaigns.

Surveillance cameras allow police to monitor for, and respond to, criminal activity. It can also – particularly with graffiti – give police evidence to prosecute offenders that are often very difficult to catch in the act by a patrolling officer. 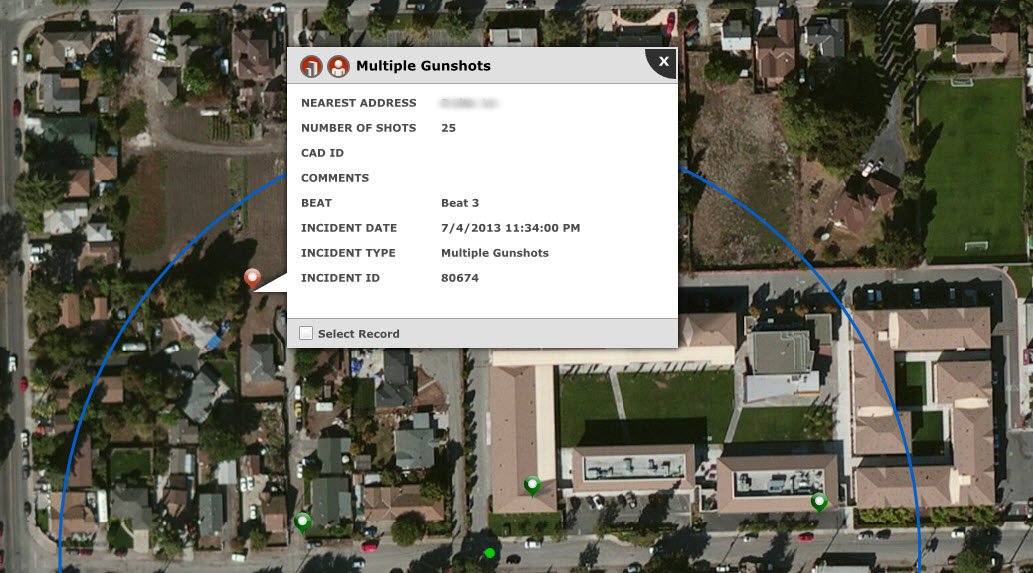 A more recent advancement to surveillance are programs like Shot Spotter. Shot Spotter uses a network of high sensitivity microphones to listen for gunshots. The system can identify a gunshot in real time and immediately triangulate its position. This allows police to respond quickly without having to wait for a local resident to pick up the phone and report the gunshot.

The digital revolution has changed the way the world interacts, invests and polices. Networking information from security footage, police records and public complaints has led to the development of highly sophisticated patterning software for police departments. There are numerous varieties of this but they all have the same goal: detecting patterns in criminal behavior to improve the efficacy of policing. 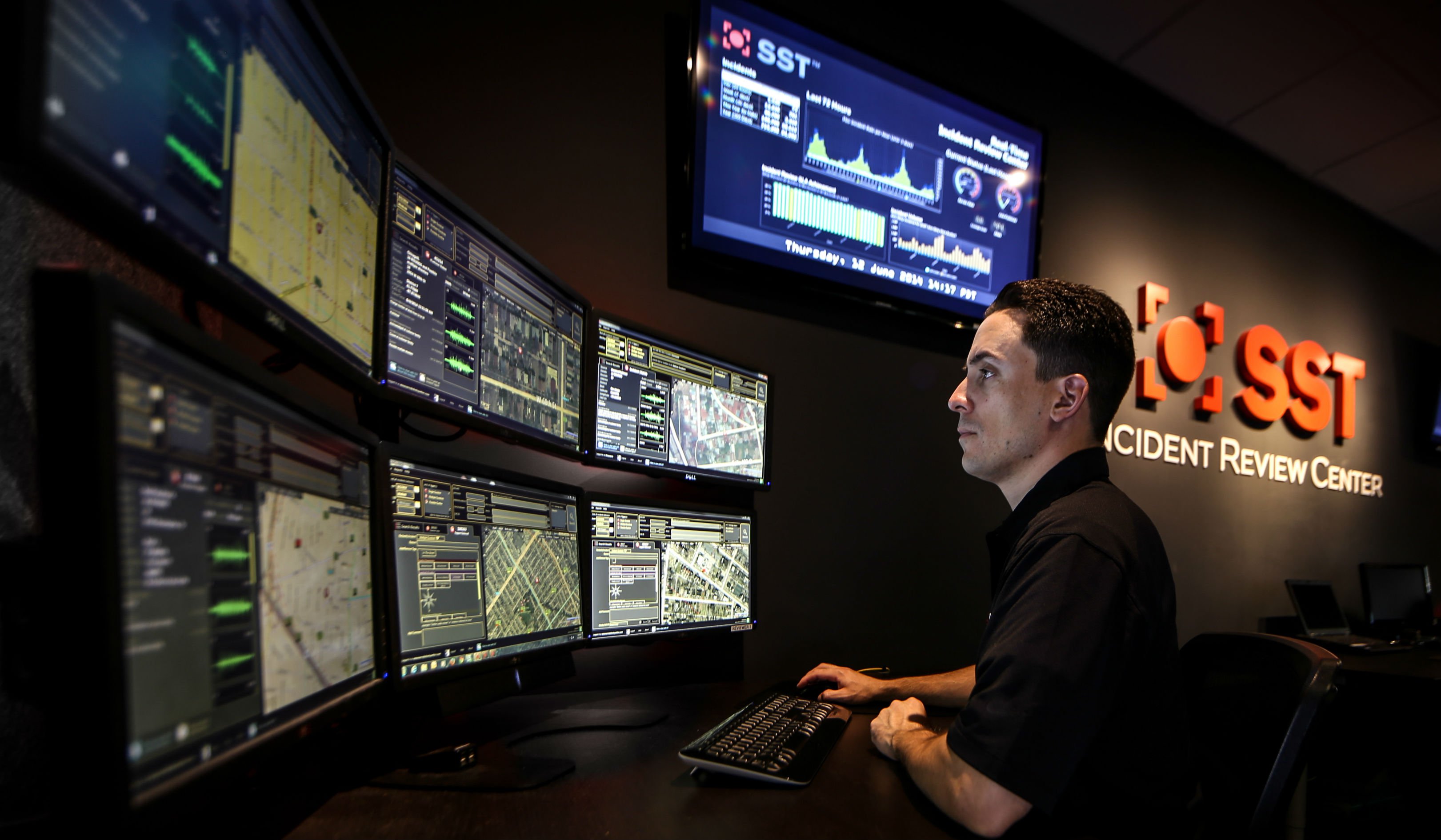 The US has no official national database of police officer-related deaths. This is why blogs, activist groups and now efforts by the The Washington Post and The Guardian to track the deaths have been so important.

While nationally networking information, or even recording it, has gone in fits and starts, local police departments are piloting their own programs.

A 2010 pilot project by Nassau County police in the US state of New York showed the efficacy of pattern analysis combined with Shot Spotter. In one year, gunshot incidents fell from 337 in 2010 to 77 in 2011.

While most people are supportive of these programs when they look at officially collected information (i.e. information collected through warranted police work), there is concern when police try to “predict” crime.

The rise of aerial surveillance as well as the improvement in facial recognition and other scanning capabilities has led the American Civil Liberties Union (ACLU) and many others to raise serious concerns. A controversial example was the NYPD’s 2012 test of an imaging program designed to use surveillance cameras to identify people carrying weapons. The program was seen as an invasion of privacy by critiques, particularly in a state where citizens can legally carry concealed weapons with a permit.

Further, predictive policing is also eerily similar to racial profiling for many critics.

Police going into dangerous situations have a lot of new tools at their disposal.

Police departments have a wide range of aerial drones to choose from. These flying cameras can provide a better view of a situation, allowing police to make more informed tactical decisions.

Closer to the ground, police units are beginning to experiment with “throw cameras” like the Recon Scout XL. These small maneuverable cameras are literally designed to be thrown by police and then operated wirelessly. The small cameras can peer around corners, explore entire floors, or even crawl into spaces not deemed structurally safe. 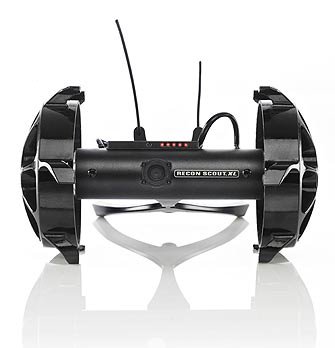 And in the rise of the truly sci-fi based, police in some areas of the US are experimenting with wall penetrating radar. An investigation in 2015 identified at least 50 US law enforcement agencies, including the FBI and the US Marshalls, that had been using radar for at least two years with minimal to no notice to the public or the courts.

The radar and aerial drones are the subjects of intense debates over the balance of police capabilities and personal privacy. The throw cameras are less controversial, at least in part because they are lesser known. It could also be that the limited range of the small terrestrial based cameras seems less invasive and less likely to be used in any sort of mass surveillance gone wrong situation.

In the face of critics, police assert that these tools used in moderation allow them to better protect themselves and the public by clarifying threats in dangerous situations.

Technology is changing policing in the United States and around the world. The ability of this digital revolution to stop the cycle of violence and particularly the deaths of unarmed black men is an open question. Activists and experts are demanding behavior change from reducing profiling, to peacefully bridging the race divide in the nation, to simple changes to police activities designed to reduce the chances of deadly misunderstandings.

Technology will play a role in stopping the cycle of violence in death in the United States. The rest is going to be up to humanity.