Act of kindness, police stayed and cooked dinner for the sobbing elderly couple. 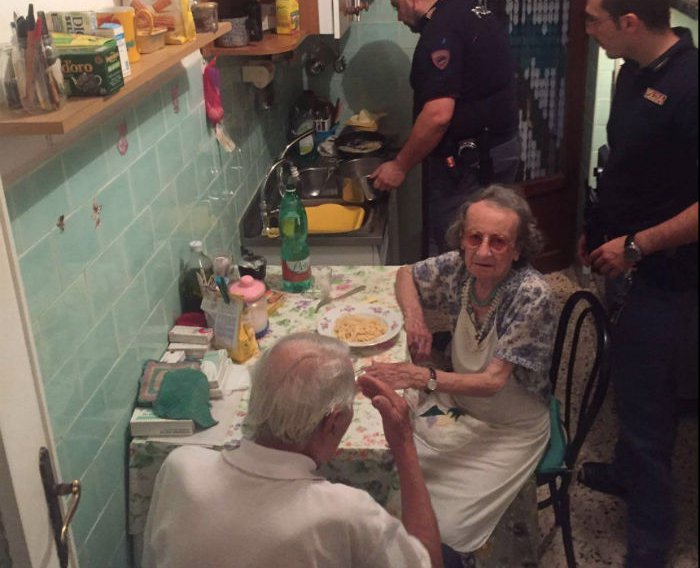 When an Italian elderly couple’s neighbors heard sobs coming from their apartment, they called the police out of concern. Police arrived to check in on the couple, but they ended up doing much more.

Four policemen in Rome showed up at the home of Michele, 94, and Jole, 89, expecting to assist with a burglary, case of elder abuse, or possibly a financial scam. Instead they found a couple overcome with the burden of loneliness.

Michele and Jole had been watching the news on Aug. 2. Since they don’t have many visitors, they found comfort in having another voice speak to them through the television, though reports of violence, attacks, desperate refugees can be terrifying. It was too much. And so the couple broke down into uncontrollable sobs so loud their neighbors called the police.

That same night, policemen Alessandro, Ernesto, Mirko, and Andrea responded to the call from the neighbors. This job required no guns, no restraints, no shields on the part of the police. Instead it took something less often taught in police training — compassion and humanity.

“This time,” their Facebook post reads, “there is a harder task to accomplish. There are two lonely souls to comfort.” In this case, that took the form of a homecooked meal.

The police surveyed the scene, first noticing only a few grapes on the table. So they decided to improvise and cook a simple homemade meal for the couple of buttered pasta with cheese.

In the post you can see Andrea even cleaning up the dishes while the other police talk with the couple comforting and reassuring them there are people out there who hear their cries.

Read More: Italy Rules That Stealing Food Not a Crime if Desperately Hungry

The Facebook post immediately went viral, with 74K people reacting to it, and more than 26,000 people sharing it. News outlets around the world reported the story.
In the digital age, it’s easier to connect with people across the world more than ever. Yet there is nothing as human as physically coming together. To hug, talk in person (since 55 percent of communication is body language) or share a warm meal together. And being a Global Citizen means showing up for those in need, whether they need material supplies, or emotional consoling.