Allegations of corruption, scandal, arrests, resignation and a re-vote 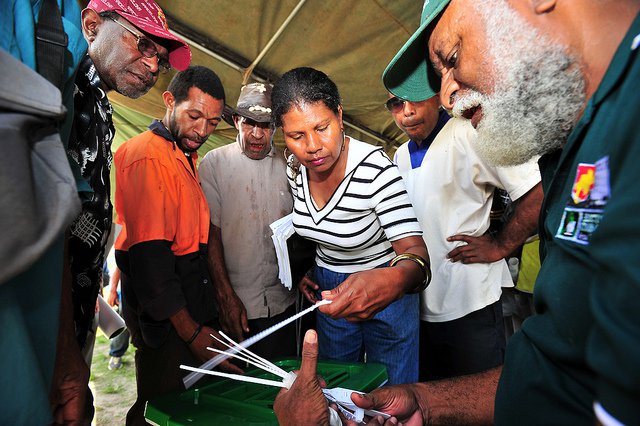 The people of Papua New Guinea (PNG) have taken to the polls and their votes are being counted. But it has not been without drama.

PNG is considered one of the most dangerous places in the world for women with an estimated two in three women experiencing domestic violence. This makes it even tougher for women to run for a seat in parliament. And yet it is essential for women to be involved in all levels of decision making to achieve gender equality, and that includes being equally represented in parliament.

In this year’s national election there was a record number of women running with 165 women out of the 3,300 candidates.

It is rare that a woman gets elected in the male-dominated society. SBS reported that "women have never held more than three of the 111 seats in any PNG parliament."

“It’s a culture (where) men must be the boss, and we must listen to our husbands, and if we don’t listen to our husband, that’s where the violence is coming in,” said candidate Kathy Tom to the SBS. Running for the seat of Gulf Regional located on the southern coast of PNG, Kathy Tom has been campaigning for women’s rights and an end to violence against women.

Read more: Papua New Guinea Named as One of the Most Dangerous Countries for Women

One of the three women elected post-independence in 1977, Nahua Rooney, has highlighted the challenges women face in the PNG parliament but the important role they play in the decision-making process.

“It’s supposed to be a men’s house, not a women’s house, so I broke the rules,” she said. Of her time as a cabinet minister she says, “My experience is that when it comes to decision making and issues, men will be talking big things, and they’re up on cloud nine, while I’m talking about the basic essentials, the water, the needs.”

Tensions in the country were high in the lead up to the election following allegations of corruption against Prime Minister Peter O'Neill. Polling also got off to a false start as the first round of votes was cancelled when electoral officers were arrested after they were accused of bribery.

During the election the Opposition leader Don Polye claimed the voting had been “rigged” and the Election Advisory Committee (EAC) resigned, stating that it was not given access to the polling information.

This did nothing to quell citizens apprehension.The chaos and credibility surrounding the election has meant that the two week period of voting, that was meant to end on Saturday, has now been extended to Wednesday. This is partly due to reported discrepancies in the ballot papers and ballot boxes.

Read more: This Community Took on the Government and a Multi-Billion Dollar Company to Fight for Their Home

The remoteness and lack the of infrastructure and finance in the country have also contributed to the challenges of running a smooth election. Australia’s Foreign Minister Julie Bishop commented on the concerning nature of the elections. “I note PNG’s elections are among the most logistically difficult in the world” she told The Australian.

Alongside reports of problems during #PNG's elections are stories of incredible efforts by officials to conduct polling in remote areas pic.twitter.com/PCGlalDNh5

Australia has sent four Parliamentary observers as well as logistical and operational support to PNG in the lead up to the elections. Julie Bishop told the Australian Parliament, “the Australian government is supporting a range of initiatives increasing not only voter awareness but also the opportunities for women to take part. We have in fact trained 127 potential female candidates ...165 women are contesting this election.”

I had the privilege of meeting our service men & women doing this amazing work in spt of PNG Democracy - @VCDF_Australia they make us proud https://t.co/OpZZAYN3yF

Bearing witness to an engaged community in PNG https://t.co/FrciQm6oX6 via @theage

It’s not the first time that PNG has experienced a rocky road in the lead up to an election. In the past there have been reports of corruption including bribery and fraud among the candidates. However progress has hopefully been made following the last national election held in 2012.

According to Dev Policy Blog: "In October 2013, PNG’s Supreme Court found that all forms of exchange of goods and money by candidates during the election period amounts to illegal bribery."

The National Court of PNG has also been given the authority to void an election if the candidate has attempted bribery.

While this is a step in the right direction, the law can only go so far to create change. People have found a way to get around the new legislation by reportedly accepting money under the guise of other reasons such as mourning periods, brie price, compensation and more. Some citizens are also said to have sold their vote citing poverty as the reason.

While counting of the votes is under way it may be weeks until we have an outcome.