"This isn't the end of a journey. But the completion of one stage of a very long life." 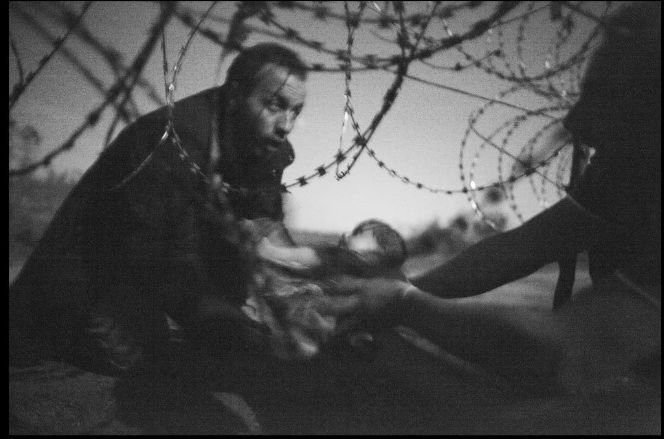 It was 3 am on the morning of August 28, 2015 when the Australian photographer Warren Richardson captured Hope for a New Life, the World Press Photo of the year.

The moon shone bright in the sky. Refugees were trying to evade detection and cross the Serbian border into Hungary. Police patrolled the area, trying to block them from crossing. On both sides of the barbed wire fence patience for refugees was waning. So many had crossed already, so many were still trying to, and there were more coming.

It was here that Richardson captured a moment of profound courage and delicacy, separation and renewal, fear and hope.

On the moonswept border, a man passed his infant through the fence to a person on the other side.

A flash would alert the police, so Richardson relied on the moonlight. What resulted was a gauzy image that looks like a charcoal painting, as one judge from the World Photo Press put it.

The jagged teeth of the fence, the tender and apprehensive look of the father, the child too young to know, the mysterious outstretched arms on the other side: all of this is symbolic of the Syrian refugee crisis, which now includes close to 5 million people. The moment takes place at a key juncture of the refugee journey. Serbia is not a member of the EU's open travel zone, but Hungary is. So making it to Hungary means a journey with potentially less border controls and easier travel to desirable destinations in Germany or northern Europe.

The moment also carries the emotional weight of the refugee crisis, of people desperate for safety in places not always open, who are willing to sacrifice themselves for their families, of people willing to pass their child through a fence they may not be able to slip through themselves.

For this striking image, World Press Photo awarded Richardson the Photo of the Year award for 2015.

The refugee crisis is not slowing down anytime soon.

Turkey, the country with the most Syrian refugees, recently closed its border. Anti-refugee rhetoric in the EU is rising once again. And, while a ceasefire was announced in Syria, the fighting has not ceased. More people will be displaced.

In such a difficult time, this photograph serves as an illuminating reminder of the work the world has left to do. Refugees merely hope for a better life. Places of peace should not set up fences to keep them away, stuck in misery.

Like the outstretched hands in the photo, countries should be doing all they can do to help.