Canada, Mexico, US join for massive push toward zero carbon

This is the type of cross-country teamwork the world needs. 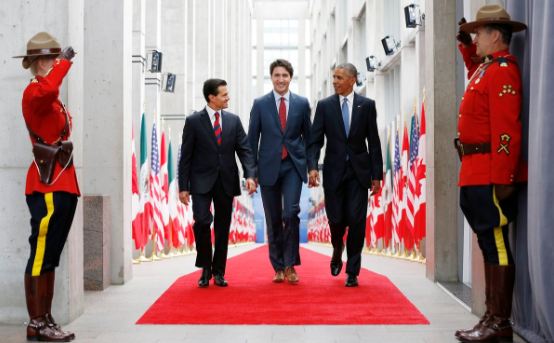 In a bit of good news after some recent headlines, Canada, Mexico, and the US will pledge to generate 50 percent of their electricity needs through zero-carbon sources by 2025, up from an earlier goal of 37 percent.

The three countries also plan to coordinate broader energy policies, including more fully monitoring and limiting the release of methane in North America, a greenhouse gas that is 20 to 30 times more potent than carbon.

This latest pledge comes on the heels of the Paris Climate Agreement, a monumental step towards a sustainable world.

The goal of the agreement was to get 195 countries on the same page. From there, each country was encouraged get as ambitious as possible when they felt ready. When put like that, dealing with climate change on a global basis seems like it will never happen, because countries have a record of dithering on climate change.

But this latest goal across North America is a sign that the global economic model is shifting away from fossil fuels.

The risks of fossil fuel dependence are becoming more evident as climate change intensifies through harsher storms, more droughts and floods and the disruption of species.

China and India have had the sharpest rise in greenhouse gas emissions over the past decade and any global climate deal needs to put them at the center.

As in the past, both countries have said that they won’t sacrifice development for sustainability if other countries aren’t willing to do the same.

A 50 percent zero carbon goal is by no means definitive. It will face staunch opposition from the energy industry and future oil-friendly political parties could roll back gains.

But the agreement will no doubt inspire similar cooperation elsewhere. The more countries unite around sustainability, the more viable it will become and the more likely energy companies will adapt.

Recently, the Italian energy giant Enel announced plans to heavily invest in renewables and predicted that all other players will follow in the coming years.

The world has already delayed to a dangerous degree on climate change. Now it finally appears to be waking up.