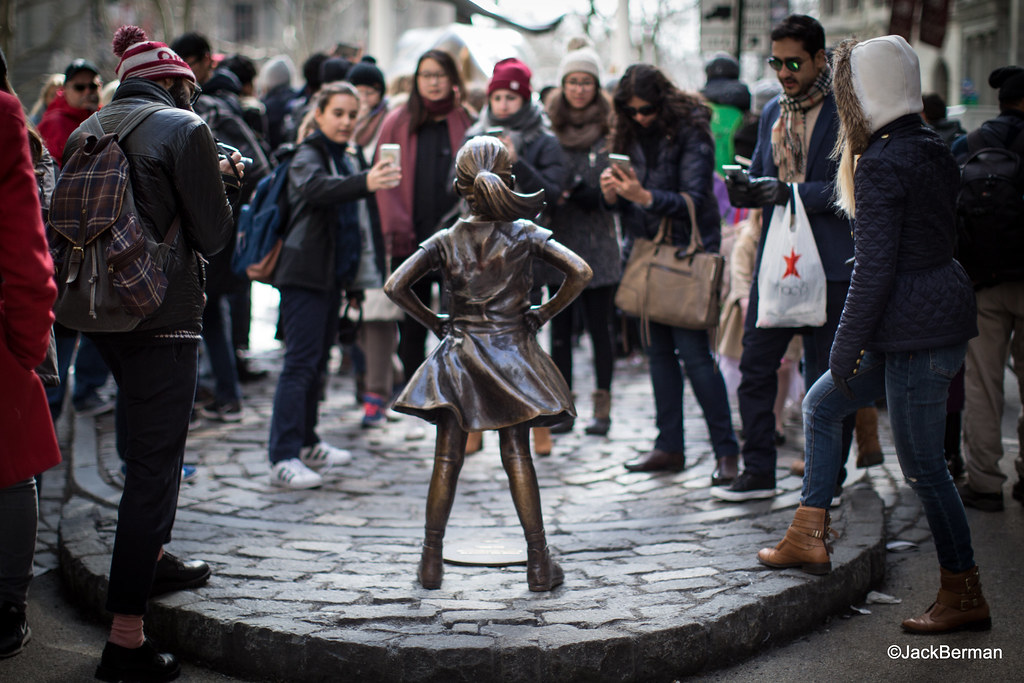 The “Fearless Girl” statue that appeared on International Women’s Day opposite the iconic Wall Street bull is not going anywhere — at least for another year.

Originally set to be removed on April 2, New York city officials announced on Sunday that it would extend its stay through February 2018.

“In her short time here, the ‘Fearless Girl’ has fueled powerful conversations about women in leadership and inspired so many,” New York City Mayor Bill de Blasio said in a statement. “Now, she’ll be asserting herself and affirming her strength even after her temporary permit expires — a fitting path for a girl who refuses to quit.”

The 4-foot-tall, ponytailed statue of a girl first attracted attention earlier this month when she appeared overnight, defiantly staring down the “Charging Bull.” Hands on her hips, the sculpture of a 9-year-old Latina aims to represent the vast underrepresentation of women on corporate boards in the financial sector.

Commissioned by State Street Global Advisors — the world’s third largest asset manager — the firm said that one out of every four companies that make up the Russell 3000 Index still have no female representation on their boards.

A study conducted by Catalyst has found that less than 15% of all board seats at more than 3,000 global companies were held by women. Although boardroom diversity is increasing, they said, women remain underrepresented.

Read More: A Statue of Small Girl Suddenly Appeared on Wall Street and Is Making a Big Statement

The decision to keep the statue comes after more than 50 New York politicians signed an open letter urging de Blasio to make the installation permanent. A petition created by supporters on Change.org has amassed more than 28,000 signatures.

But not everyone stands behind that decision.

Arturo Di Modica — the artist behind the bronze bull — told MarketWatch that the girl should be carted away.

Following the 1987 stock-market crash, Di Modica’s 7,100-pound bull was a gift to the city. Just like State Street’s statue, the bull appeared out of the blue in front of the New York Stock Exchange. He called the statue an advertising ploy.

And yet, Di Modica may remain outnumbered.

“The 'Fearless Girl' inspires all of us to realize the power we have in ourselves,” Maloney said. “The power women and girls have everywhere."