“If you were going to have a surgical procedure, would you go to a surgeon or to someone you just happened to bump into on the street who thought they rather liked the idea of having a practice?” asked Prime Minister Malcolm Turnbull, discussing immunisation in a recent interview with MamaMia.

The conversation surrounding immunisation is a topical (and often controversial) one in Australia, brought again into the spotlight by the Victorian government’s recent campaign in support of their 2016 ‘No Jab, No Play’ legislation.

The law in question means that Victorian children cannot be enrolled in any form of registered early childcare unless they have been immunised. This extends to a variety of facilities including kindergartens and day care centres and aim to keep children safe and healthy.

Under the National Immunisation Program (NIP) Schedule, Australian children can be vaccinated for free and the NIP recommends that children aged 0-4 be vaccinated against 13 diseases or more, depending on the child.

To assist with this, the Victorian government has developed an app, VaxOnTime to help families to keep their vaccinations up to date.

Community public immunisation has had a hugely positive impact on the health of Australians since its introduction in 1932, according to Better Health Victoria.

In the last 85 years, the number of deaths in Australia caused by vaccine-preventable diseases has dropped by a whopping 99%. Diseases such as diphtheria, tetanus and whooping cough, once deadly killers of thousands of children annually, are now increasingly rare. Additionally, around 3 million deaths are prevented every year, by immunisation programs around the globe.

The effectiveness of mass immunisation largely relies on a "herd immunity," a concept which essentially means that once a certain percentage of people are immunized, there is no way for disease to spread.

"No Jab, No Play" aims to raise child immunisation rates in Victoria to around 95%, creating herd immunity. The government hopes that this will prevent the spread of disease and protect those who are unable to be vaccinated for reasons such as health or age.

Despite the enormous positive impact of community public vaccination in Australia since 1932, many people remain sceptical about the impact of vaccination. Living in the age of the internet, consumers have access to huge volumes of information and it’s often difficult to know who and what you can trust.

“It’s really important for people to be very discerning and to recognise that some sources are more reliable than others,” said PM Turnbull. “Some sources of information are more dependable. When you are looking for information on health matters, you should be looking to sources that have authority, such as the Department of Health.”

Having conducted extensive research over the last twenty years, WHO confirms that there are very few major risks associated with vaccination. Additionally, any minor risks are significantly outweighed by the benefits which come from immunising against debilitating diseases such as measles, polio or hepatitis. Better Health Channel and other organisations such as Telethon have also dispelled a variety of myths, such as the common misconception that immunisation causes autism, diabetes and sudden death in children.

For World Immunization Week 2017, which runs from 24-30 April, WHO’s focus is on raising awareness about the crucial role and impact of immunization globally.

It's World Immunization Week!#VaccinesWork to save lives.
Vaccines prevent more than 2 million deaths every year https://t.co/J64QPaSqJFpic.twitter.com/DMobb95yey

This year is an important one as it marks the half-way point in the Global Vaccine Action Plan. The GVAP is endorsed by 194 member states of the World Health Assembly, and aims to provide universal access to immunization by 2020 and eradicate diseases such as Polio.

Read more: Why Global Citizens' Fight Against Polio Is So Critical

Although the global rate of vaccination has risen in recent years, many diseases such as Rubella, HIV and Zika remain common in many parts of the world. Globally, there are 19.4 million children who remain unvaccinated or under-vaccinated and we have a long way to go.

So what can you do to get involved with World Immunization Week 2017?

1.     Engage with your community networks. Open and respectful conversation is the first step to making a change.

2.     Use WHO’s quotegraphic template to share voices in support of immunization

4.     Connect with media and read widely to be well informed 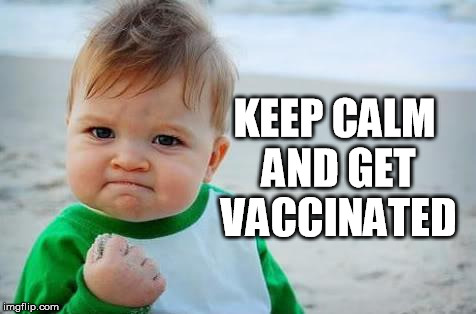 'No Jab, No Play': Why Children Attending Early Childcare in Australia Must Be Vaccinated