It’s never too late to learn from our past mistakes and try and make amends. 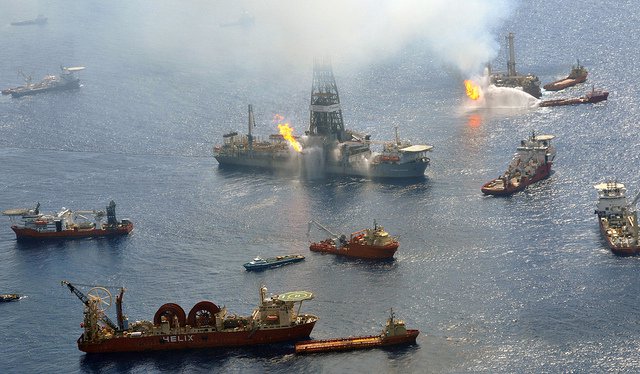 Oil spills can be deadly to marine birds, mammals, fish and plant life.

Oil destroys the insulating ability of mammals with fur, like sea otters. It also hampers the water repellency of a bird’s feathers, exposing them to extreme conditions that could cause hypothermia.

In turn, eating fish and shellfish that have been affected by oil spills could cause severe reactions, including poisoning and death.

Crude and light oils also instantly kill plants, which are important sources of nutrition for most marine animals.

Oil spills also become immediate fire hazards. They can also contaminate drinking water supplies, leading to the spread of waterborne diseases. This can further lead to decline in tourism and the marine industries, resulting in even more of a negative economic impact.

These are just a few of the ways in which oil spills have a negative impact on the environment.

Yet, to simply say that humankind has not been responsible about the environment would be a gross understatement. Most modern wars continue to be fought over oil, despite its use as a fossil fuel that accelerates climate change.

While it seems like leaders across the world are finally taking steps to curb global warming, increase the production of renewable energy, and reduce dependency on fossil fuels, it’s safe to say that it’ll take decades or even centuries to undo the damage we’ve already caused.

But it’s never too late to learn from our past mistakes and try and make amends. On World Ocean’s Day, here’s a look at the nine biggest marine oil spills in history.

#DidYouKnow Iraqi forces released 300m gallons of oil into the Persian Gulf in 1991 during the Gulf War #oilspillpic.twitter.com/xKTFIOaCWf

Resulting from the Gulf War in 1991, the Gulf War oil spill was the largest oil spill in history. In late January 1991, Iraqi forces deliberately opened valves at the Sea Island oil terminal in Kuwait and dumped oil from several tankers into the Persian Gulf. It was supposed to be a strategic wartime move against the US forces, the aim of which was to foil a potential landing by US Marines. The environmental impact caused by this deliberate oil spill was severe. Marshlands in the area continue to contain large quantities of oil, and full recovery is likely to take decades.

Oil & soot continued to rain down on seafloor for months after 2010 Deepwater Horizon leak: https://t.co/bLs3jWdNRvpic.twitter.com/5BsW9xgb3j

Where: Gulf of Mexico

The Deepwater Horizon was a drilling oil rig that operated on water. It was drilling a deep exploratory well on the BP-operated Macondo Prospect in the Gulf of Mexico when, on 20 April 2010, methane gas exploded from the well and ignited. The well began spilling oil into the water and was only capped 87 days later on 15 July 2010. Considered the largest accidental marine oil spill, 11 people went missing and vast environmental damage was done, triggering an enormous protest movement. The spill was declared sealed on 19 September 2010, but reports in 2012 indicated that it was still leaking. In 2014, BP was held responsible for the oil spill due to gross negligence and reckless conduct. In the largest corporate settlement in the history of the United States, BP agreed to pay $18.7 billion in fines.

A blowout at the #IxtocI oil well #OTD in 1979 spills over 176 million gallons of crude into the #GulfOfMexico. pic.twitter.com/gRUEVbMwgT

Where: Bay of Campeche, Mexico

Ixtoc I was an exploratory oil well in the Bay of Campeche, Gulf of Mexico. On 3 June 1979, Pemex, Mexico’s state-owned oil company was drilling an oil well when the well suffered a blowout, or an uncontrolled release of oil. It was capped nearly 10 months later, on 23 March 1980, but it had already discharged 140 million gallons of oil. While Pemex spent $100 million USD to clean up the oil spill, it avoided most compensation claims due to the fact that it was state-run.

Where: Trinidad and Tobago, West Indies

The Atlantic Empress was a Greek large crude oil carrier which, in July 1979, collided with the Greek supertanker Aegean Captain near the island of Tobago. Bad weather conditions including heavy rain and thick fog prevented the ships from sighting each other until it was too late to avoid collision. Both ships caught fire, and were abandoned by the crews. However, the accident took the lives of 26 members of the Empress’s crew and one crew member on the Captain. Despite efforts to contain the damage, a week later the Empress was still burning when an explosion inside caused the intensity of the oil spill to increase. The next day another explosion doubled this intensity causing the total amount of oil spilt in the accident to reach 88.3 million gallons.

In 1983 when the Iran-Iraq War was going on, a spill was caused by a tanker hitting a well on a platform. In March that year, Iraqi forces attacked the platform, and the spill caught fire. Due to hostilities caused by the war, the spill could not be capped until six months later in September. A second spill occurred when Iraqi helicopters attacked another platform. This spill was capped in May 1985.

Where: Near the coast of Angola

The ABT Summer was an oil tanker under the Liberian flag, carrying Iranian crude oil to Rotterdam, Netherlands. An unexpected explosion on May 28 1991 caused a fire onboard the ship and it, along with its cargo, began to burn. It continued to burn for three days before sinking on June 1, killing 5 crew members.

Castillo de Bellver was a Spanish tanker that was transporting light crude oil, travelling from the Persian Gulf to Spain. On 6 August 1983, a fire onboard caused the ship to explode and burn. The crew abandoned the sip, which eventually broke into two, pouring oil into the water. Due to this being an environmentally sensitive area known for its seabird rookeries and productive fisheries, there was threat of grave environmental danger. A part of the ship was thus sunk using explosives. However, strong winds helped blow the oil away from the shore, preventing a major environmental disaster. But, due to the oil already in the water, several seabirds were rescued from the sea with their feathers glued together with oil.

Like #6, Amoco Cadiz was en route from the Persian Gulf to Rotterdam, Netherlands. In the morning of 16 March 1978, the ship encountered stormy weather in the English Channel. A heavy wave hit the ship’s rudder, rendering it unresponsive. Attempts to repair the damage were not successful. The crew was rescued, the ship broke into two pieces the next day, releasing its entire cargo into the water. 11 days later, it broke into a third piece due to stormy seas, resulting in the largest oil spill of its kind.

Otters are cute, but they're also threatened by oil spills and habitat degradation. #otter#animals#protectpic.twitter.com/wAQuQUnmrS

Where: Near the coast of Nova Scotia, Canada

The Odyssey was an oil tanker which was in operation from 1971 to 1988. On November 10 1988, the ship was in the North Atlantic off the coast of Canada. There was an explosion onboard, causing the sip to break into two and start sinking. As the ship sank, a fire broke out, causing the oil to catch fire. A Russian weather ship that had responded to the Odyssey’s distress call was unable to approach the ship because it was surrounded by ignited oil slicks. All 27 of the crew members are presumed to have died during the accident.