“To help advance the conversation around hijabs and Muslim women in sports.”

The Nike symbol is known all over the world — on sneakers and on t-shirts with the words “Just Do It” emblazoned below. And more recently, in a sign of inclusivity, Nike’s swoosh has appears on hijabs in some areas, for athletes who want to cover their heads without sacrificing their competitive edge.

As of today, the Nike Pro Hijab is now available for athletes worldwide.

According to the company, Nike designers have been working with female athletes around the globe in recent years to prototype different hijab designs that could allow elite competitors to see, hear, sweat, and move freely without any interference, the company said today.

They worked with weightlifter Amna Al Haddad and figure skater Zahra Lari, both from the United Arab Emirates, to put the garment to the test in their respective sports, as well as Manal Rostom, a Nike Run Club Coach in Dubai, and Zeina Nassar, a German boxer.

And the results were clear:  the world’s top Muslim athletes wanted hijabs made from lighter, softer material that would allow them to breathe, stretch, and win. In response the company produced a pull-on sport hijab made of stretchy mesh, with holes for ventilation, and elastic binding so it fits snugly on an athlete’s head, according to Nike. 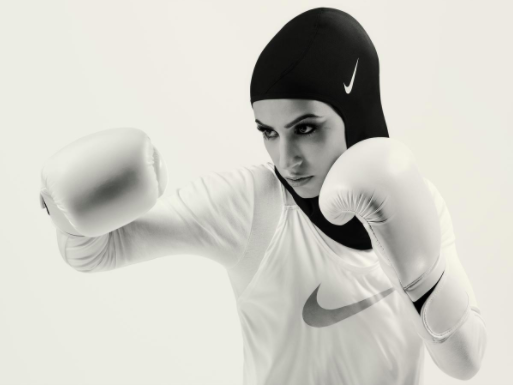 American Olympian fencer Ibtihaj Muhammad, who was the first American athlete to wear a hijab in the Olympics, said that prior to using the Nike hijab she was wearing a child’s hijab made of thick material that, when it got wet from sweat, would become heavy and stiff and prevent her from hearing the referee. She lost multiple points for false starts because she couldn’t hear the officials’ calls, she told Nike.

“It really sunk in how much my previous hijab was hindering my performance when I tried the Nike Pro Hijab,” she said. “Suddenly, I could hear, I wasn’t as hot and it felt like my body was able to cool itself down better and faster.”

Muhammad, who is a Nike-sponsored athlete, said the new hijab will also “help advance the conversation around hijabs and Muslim women in sports and further make sports an inclusive space.”

Global Citizen campaigns against discrimination by religion, gender, or any other quality, and stands for freedom and justice for all. Join us in taking action here.

The hijab is for sale today in two colors around the world, with new colors coming in January.