An account of humbling hospitality and one woman’s strength.

Over 80% of refugees from Nigeria have found shelter in host families in Niger, most of them poor and chronically hungry themselves. This is an account of humbling hospitality and one woman’s strength.

“A cow has to carry her horns, even if they are heavy." Rahamatou Ousmane has an infectious smile. The 42-year-old mother of five wears a bright green headscarf and a dress of the same fabric. She is a resident of Nguel Kolo, a small village in Eastern Niger close to the border with Nigeria. So what exactly is the weight that Rahamatou is talking about? She has seven brothers who all lived and worked in Nigeria. When armed groups started attacking villages and towns, the brothers wanted their wives and children to be safe. So they sent them to Rahamatou who now hosts seven sisters-in-law and around 30 children. “I don’t even know how many”, she says. Next to her humble hut, she set up makeshift structures of wooden sticks for some of the relatives. Other women are sheltered in the close neighborhood and Rahamatou pays the rent.

While two refugee camps are currently being set up in Eastern Niger, over 80 percent of refugees from Nigeria have taken refuge in host communities. This puts an enormous burden on the generous hosts who have to feed numerous extra mouths – in a region that already suffers from chronic lack of food and water.

“I like the night, that’s when we can get some rest," Rahamatou tells us. “We spend all day trying to get food.” For the first two months, She and the other seven women didn’t receive any support. But now they benefit from the monthly rations distributed by CARE. However, it is far from enough because the children are so numerous. She is a strong woman whose husband has two other wives and only pays the occasional visit. Rahamatou shrugs with her shoulders when asked about him. There is not much to expect, she is heading this household by herself. One of her five children is married, but she cares for the remaining four by selling incense and food at the market. And now this care has been extended to almost 40 extra people. 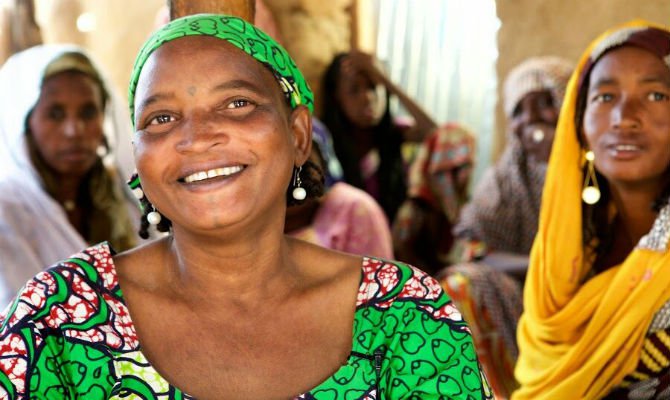 Rahamatou Ousmane lives in Niguel Kolo, a village in eastern Niger with four of her five children. When northern Nigeria began to suffer from violence, Rahamatou began hosting her seven sisters-in-law and their 30 plus children at her house.
Image: CARE

Rahamatou and her sisters-in-law all sit in a shady area in front of Rahamatou’s house. One of them carries a girl that doesn’t seem able to move her limbs. “She is six years old, can you believe it?” explains Rahamatou. Her niece suffers from a neurological deficit and cannot hold herself up straight. Her mother is crying in silence, holding the little girl with great tenderness. When she needs to breastfeed her other child, she hands over the six-year-old girl to a brother who gently puts her on his back. Will this little girl have a chance to survive? There is not much more than some basic health services available in Nguel Kolo. Many of the children suffer a chronic cough, the sand and dust in the Sahel region are hard on little lungs. “Our children always say they want to go back," explains Hawa Chaibou, a 32-year-old sister-in-law of Rahamatou who also contributes to the family’s income.  “They were used to run freely and now we are living here, waiting to return.” While they spend their time waiting, Rahamatou will continue to care for her family. She will wake up every morning knowing that the meals will not be sufficient, the money will not be enough and that the needs of everyone in her household cannot be met. But her strength, courage and generosity will keep her on her feet. And she will carry the responsibility just like a cow carries her horns.

With the rising influx of refugees from Nigeria to Eastern Niger, CARE has increased its efforts to support both displaced families and host communities. In Chetimari and other communities, CARE organizes distributions of food, household and hygiene items, cash and vouchers to pay for basic necessities. Across the region, our emergency teams also rehabilitate water points, provide water to a refugee camp and organize transport for those refugees who want to move from host villages to one of the two official refugee camps that have been set up more inland. As of April 2015, CARE’s support has reached over 72,000 people across the region of Diffa in Niger.

This article was contributed by Sabine Wilke.