When a Nigerian man posted on Facebook advertising an eight-day female genital mutilation (FGM) “bonanza,” he did not expect to be met with outrage.

The man, known as Alhaji Adebayo, took to the social media platform to offer free female circumcisions — a term sometimes used to describe FGM — at his home, according to the Daily Mail, although the harmful practice was banned in Nigeria in 2015. 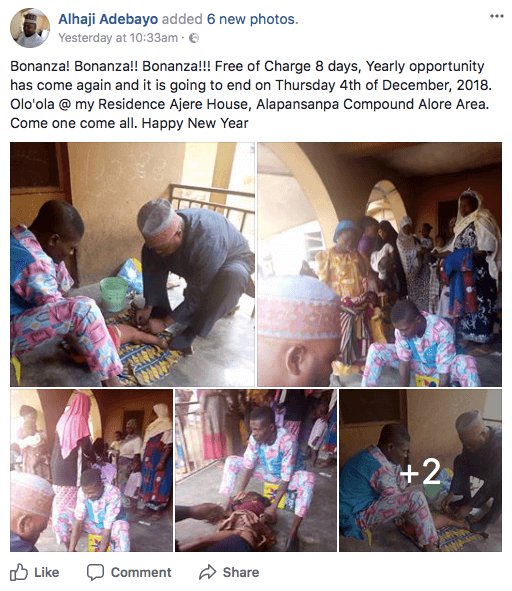 People were quick to respond to Adebayo’s post calling the practice “outdated” and “wicked.”

Adebayo ultimately removed the post, CNN reported, and a day later wrote that he had met with representatives from UNICEF and the Child Protection Network who shared information about the harms of female genital mutilation with him. 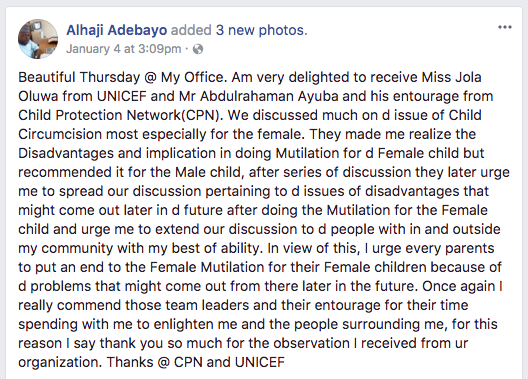 “They made me realize the Disadvantages and implication in doing Mutilation for d Female child,” he wrote. “In view of this, I urge every parents to put an end to the Female Mutilation for their Female children because of d problems that might come out from there later in the future.”

On his Facebook profile, Adebayo lists himself as a self-employed contractor, but the anti-FGM advocates who visited him told CNN that Adebayo operates an unofficial “charity” organization that subsidizes male and female circumcisions — sometimes for as little as $1.50 (500 Naira).

In response to comments on his initial Facebook post, Adebayo said that his organization also has helped to pay the bills for people who want their daughters to undergo FGM in a hospital, rather than through traditional methods like those Adebayo offered.

UNICEF estimates that 25% of Nigerian girls and women between the ages of 15 and 49 have undergone FGM — a cultural practice often misunderstood to be a religious practice — and that almost all of them did so before the age of 5.

Globally, at least 200 million girls and women — in countries including Sudan, Somalia, Egypt, India, Malaysia, and Saudi Arabia — have been subjected to FGM, according to UNICEF. Ongoing criminal prosecutions of FGM are also occurring in the US and UK.

FGM is any procedure that “involve[s] partial or total removal of the external female genitalia, or other injury to the female genital organs for non-medical reasons,” according to the World Health Organization, and can create long-term health problems and cause life-long pain. The practice is a cultural one, entrenched in social attitudes that treat women as “impure” or needing to be controlled.

Though Nigeria outlawed FGM as a country several years ago, it is up to individual states to adopt the legislation and only 10 out of 36 states have done so, according to the UN Population Fund.

Kwara, where Adebayo lives, is not among the 10. Adebayo told the advocates he met with that he was not aware that FGM was illegal, CNN reported.

So far, there have been no FGM-related convictions in Nigeria. And activists say a major change in cultural norms will be necessary to actually end the practice, the Huffington Post reported.

Global Citizen campaigns for gender equality and against gender-based violence. You can take action here to #LeveltheLaw to call on world leaders to eliminate gender-bias from legislation.