Netherlands Is Making Strong Strides on Their Commitment to a Safer, Cleaner World

Thanks to your actions 2.4 million have access to urgently needed sanitation

Today is World Toilet Day, and while 4.5 billion people around the world still lack even safe sanitation services (like a working toilet), it is inspiring to see that some governments are investing in meaningful solutions.

These advocacy efforts paid off when Prime Minister Rutte announced $50 million from the Dutch government going towards WSSCC — the Water Supply and Sanitation Collaborative Council, expected to enable five million people to end the practice of open defecation.

Yet the commitment is only half the story, we need leaders to follow through on what they announce on our stage. Which is why today, just in time for World Toilet Day, we are pleased to announce that the Dutch government is well and truly keeping its promises to the world's most vulnerable.

One year later, the Netherlands has reported back and the progress made is impressive. The Dutch Government published its 2016 Development Results regarding progress made on water and sanitation.

According to the report, Dutch funded partners like The Wash Alliance, PLAN, BRAC, MAX-foundation, Water Supply and Sanitation Collaborative Council (WSSCC), and UNICEF have contributed to reaching 2.4 million people, mainly in Africa and Asia with improved sanitation in 2016. 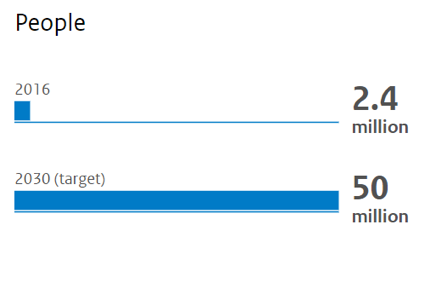 In 2016, 15,000 communities supported by Dutch funded programmes were declared open defecation free. This means that hygienic sanitation facilities — including toilets, latrines, and handwashing facilities — are available and being used.

Read more: See how commitments made at last year’s World Toilet Day at the Global Citizen Festival in India are tracking.

In addition, significant progress was made towards the new Dutch target to provide 30 million people with access to safe drinking water by 2030. In fact, 2.8 million people were reported to have gained access to safe drinking water through Dutch-funded programmes in 2016. This does not only mean significant progress towards Global Goal 6, but also advances Global Goal 3, as proper sanitation and hygiene reduces health risks and prevents diseases such as cholera.

This progress is critical because access to clean water and toilets means children avoid fatal diseases caused by drinking dirty water; girls are able to access an education because they have a safe, working toilet at school; and communities are able to live healthier, more peaceful, and prosperous lives.

At the Global Citizen Festival in 2016 the Foreign Minister asked New Yorkers a question: Would you rather have access to a phone or a clean toilet? The fact remains, that in our world billions more have access to a phone than a safe toilet. The Dutch commitment was an ambitious step in the right direction to change these statistics.

We thank the Dutch Government for its leadership and thank each and every one of you for taking action to ensure the commitment was delivered upon.

Global Citizens will not only be watching the Netherlands regarding progress made on the goals set, but also its activities as member of the High-level Panel on Water (HLPW), whose 11 country members collectively work on long term planning and short term innovation for water and sanitation.

It is simply not enough to have access to a toilet. People everywhere must have access to systems that collect, transport, and treat fecal waste to prevent diseases. This is why we are calling on the Co-Chairs and members of the High-level Panel on Water to prioritize fecal sludge management and put menstrual hygiene high on their agenda.

We are looking forward to next year’s progress results that will hopefully bring us another step closer to achieving the SDGs by 2030, and a world where everyone has access to clean water and sanitation.