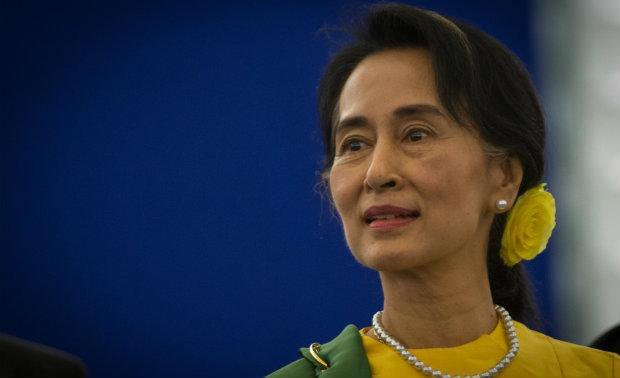 On Sunday I was doing the usual browse of the weekend's news when I noticed this incredible story about Aung San Suu Kyi, a Myanmar (formerly Burma) human rights activist and general kick ass lady.
Since being released from house arrest after 15 years in 2010 (I know, crazy, read more below), she has been on a mission to reform her country and to bring a new wave of transparency and democracy to the 53 million residents of Myanmar.
I find her life story extremely inspirational, her determination and passion for her country and for democracy has seen her separated from her party, her children and heartbreakingly, miss the death of her husband whilst under house arrest in 1999.
Now, although she has managed to achieve incredible things, she has another fight on her hands. An article in the Myanmar constitution says anyone whose spouse or children owes allegiance to a foreign power cannot become president or vice president, and Suu Kyi's sons are British nationals. As the leader of the opposition party, this electoral law is something Aung San Suu Kyi is asking the Army to change so that she can become president if her party manage to win the 2015 Myanmar election.
On Tuesday Aung San Suu Kyi officially urged supporters to “test” the country’s parliament with calls for constitutional reform, kicking off a two-month petition campaign demanding changes to the country’s military-drafted charter
WHO?
Aung San Suu Kyi, Burmese opposition politician and chairperson of the National League for Democracy in Myanmar (formerly known as Burma). As one of the most prominent human rights activists in Myanmar, Aung San Suu Kyi has always courted controversy. In the 1990 General Election the NLD won 59% of the national votes and 81% of the seats in Parliament with her at the helm, but the military junta refused to recognize the results. Before the elections Aung San Suu Kyi had been detained under house arrest as a way of silencing her political views. She remained under house arrest in Burma for almost 15 of the 21 years she resided there, finally being released on the 13 November 2010.
Myanmar Army, which as per the 2008 constitution, holds 25 percent of all parliamentary seats and the power to change the constitution. They have a historic reputation for dominating the political landscape, with Myanmar being under military rule since 1962.
WHAT HAPPENED?
Myanmar started moving from a half century of dictatorship to democracy three years ago, but the army still lurks heavily in the shadows. The 2008 constitution drawn by the former military rulers gives the army lots of privilege, such as an automatic right to 25 percent of all parliamentary seats, power to appoint three cabinet ministers and the veto power to any changes the constitution.
In the countries last election in 2010 the NLD refused to run in response to restrictive new election laws being imposed by the army, including one that meant many of its most prominent members were barred from standing, due to being political prisoners. The laws were written in such a way that the party would have had to expel these members in order to be allowed to run. The election was won in a landslide by the military-backed USDP and was described by Barack Obama as "stolen".
Since being freed from house arrest Aung San Suu Kyi has become the leader of the main political opposition to the current government, however, the current constitution rules that she can not be elected as president because of her marriage to Dr. Michael Aris and the fact that their two children don't live in Myanmar.
WHY IS THIS IMPORTANT?
If successful, these changes could spell a new era for Myanmar, a country which ranks 149 out of 187 countries in the 2012 UNDP Human Development Index ranking.
As it stands the Army can veto and suggested to changes to the constitution, which means that progress is stifling.
The NLD advocates a non-violent movement towards multi-party democracy in Burma, which was under military rule from 1962. Aung San Suu Kyi's party also supports human rights (including broad-based freedom of speech), the rule of law, and national reconciliation.
In a speech of 13 March 2012, Suu Kyi demanded, in addition to the above, independence of the judiciary, full freedom for the media, and increasing social benefits to include legal aid.
She also demanded amendments to the constitution of 2008, drafted with the input of the armed forces, stating that its mandatory granting of 25 per cent of seats in parliament to appointed military representatives is undemocratic. Along with this, Aung San Suu Kyi favours safeguarding the rights of ethnic minorities in a real democratic union based on equality, mutual respect and trust.
All of these things are imperative if a country is going to develop, which, considering their current world ranking, needs to happen and soon.
In order for the world to progress, for countries to grow and for global citizens to achieve the world we want, we need leaders like Aung San Suu Kyi to stand up for what they believe in and fight, when necessary, for what's right. If you want to be part of this exciting and important time then join the Global Citizen movement today!