This is what we all need right now. 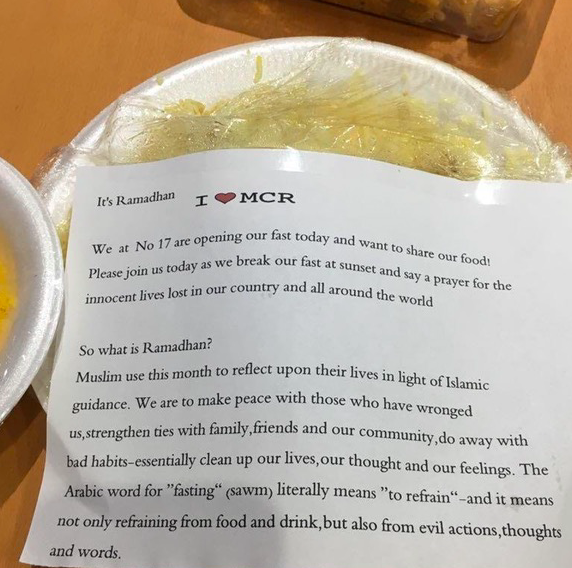 After the recent terror attack in London, and the US pulling out of the Paris agreement, it's time for some good news. And this story will definitely lift your spirits.

A user on the website Reddit posted an image this week of a note he received from his Muslim neighbors, inviting him to break their Ramadan fast with them and explaining the significance of the Muslim holy month.

Anywhere in the world, this message would be a heartwarming, lovely invitation from a neighbor. But the message was delivered in Manchester, England, a city rocked by a terrorist attack at an Ariana Grande concert just weeks ago, and a city which in the wake of that tragedy has become a unified beacon of hope, love, and neighborly goodness.

In the note posted to Reddit, the anonymous neighbor explained the meaning of Ramadan, saying that it is a time for Muslims to “make peace with those who have wronged us, strengthen ties with family, friends and our community,” and to “refrain from evil actions and thoughts.”

In Ramadan, Muslims fast during the day, refraining from eating or drinking to “clean-up our lives,” the note says.

Then the neighbor goes on to welcome their community to understand Islam by inviting others into their home to practice the Muslim tradition of breaking the daily fast at sunset. The invitation also says the gathering will be a time to honor and mourn the lives of those lost in the United Kingdom’s two recent terror attacks.

Twenty-two people were killed and dozens more were wounded in when a bomb was detonated detonated by 23-year-old, Salman Abedi, at Grande’s concert, according to police. Less than two weeks later, three men drove a van onto the London Bridge, killing seven and injuring 48 when they began stabbing victims nearby.

As the world mourns the victims of these brutal attacks, there is solace in these examples of community members working to break religious and cultural boundaries by uniting for prayer and peace.

And this anonymous neighbor in the United Kingdom is not the only Muslim to try and bridge divides in their community. Acts of community-building and kindness popped up in the US over the weekend too.

In Santa Ana, Calif., two Muslim activists united Latinos and Muslims in their community with tacos trucks at the Islamic Center of Santa Ana on Saturday night.

These are encouraging acts of unity in a time when 57% of Americans believe Muslims face the most discrimination in the country, according to a survey conducted by Pew Research Center.

Ramadan continues through June 24. Let’s hope more people will extend open invites for community-building and compassion during this time of peace and charity.