Students perform a prayer on the first day of the holy fasting month of Ramadan at Ar-Raudlatul Hasanah Islamic boarding school in Medan, North Sumatra, Indonesia, May 27, 2017.
Binsar Bakkara/AP
Citizenship

Moving Photos From Muslims Observing Ramadan Around the World

Muslims around the world, from Palestine to India to Malaysia, have spent the month in prayer.

This weekend, the holy month of Ramadan is expected to come to a close when the new moon appears in the sky.

For the past 30 days, Muslims around the world have observed the holiday by fasting, praying, reflecting, and gathering as communities to celebrate. Each year, Ramadan falls on the ninth month of the Arabic lunar calendar, and practicing Muslims observe the tradition of not eating between sunrise and sunset. This year, since Ramadan fell in June, when days in the northern hemisphere are the longest, the fasting included long days without food.

At the end of Ramadan, Muslims celebrate the "breaking of the fast" during a three-day celebration known as Eid al-Fitr. Here are some photos from the holy month of Ramadan around the globe. 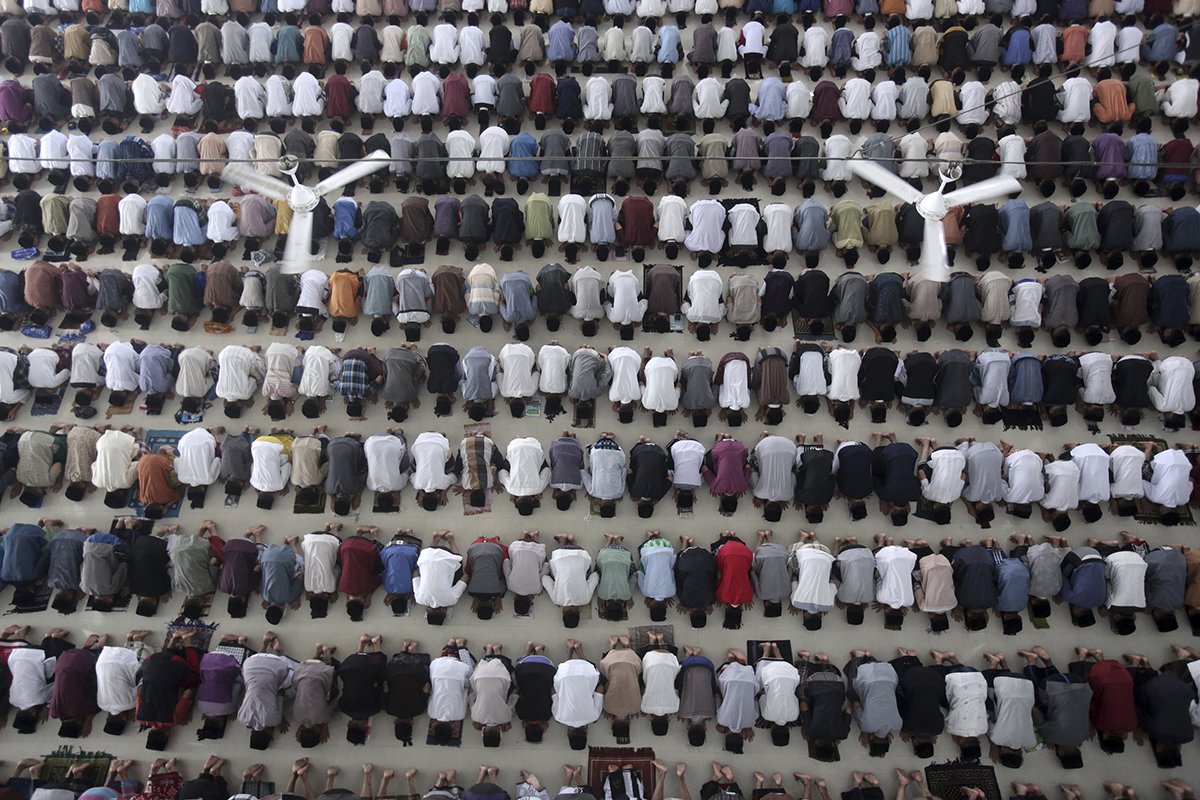 1)Indonesia: Students perform a prayer on the first day of the holy fasting month of Ramadan at Ar-Raudlatul Hasanah Islamic boarding school in Medan, North Sumatra, Indonesia, May 27, 2017.

2) Jerusalem: Palestinian girls stand in front the Dome of the Rock as they attend the first Friday prayers of the Muslim holy month of Ramadan at Jerusalem's al-Aqsa mosque compound on June 2, 2017.

3) India: Indian Muslim boys recite the Koran at the Madrasatur-Rashaad religious school in Hyderabad on June 19, 2017, during the holy month of Ramadan.

4) Syria: Syrian residents of the rebel-held town of Douma, on the outskirts of the capital Damascus, break their fast with the 'iftar' meal on a heavily damaged street on June 18, 2017.

5) Turkey: Muslims attend the mass prayer at the historical Sultan Ahmed Mosque, known as Blue Mosque, to mark Laylat al-Qadr, holiest of the Muslims' five holy nights during the month of Ramadan, in Istanbul, Turkey on June 21, 2017. Laylat al-Qadr, which means 'Night of Power' or 'Night of Decree' when the first verses of the Muslims' Holy Qur'an were revealed to the Prophet Muhammad. In Islamic belief Laylat al-Qadr is better and valuable than a thousand months. 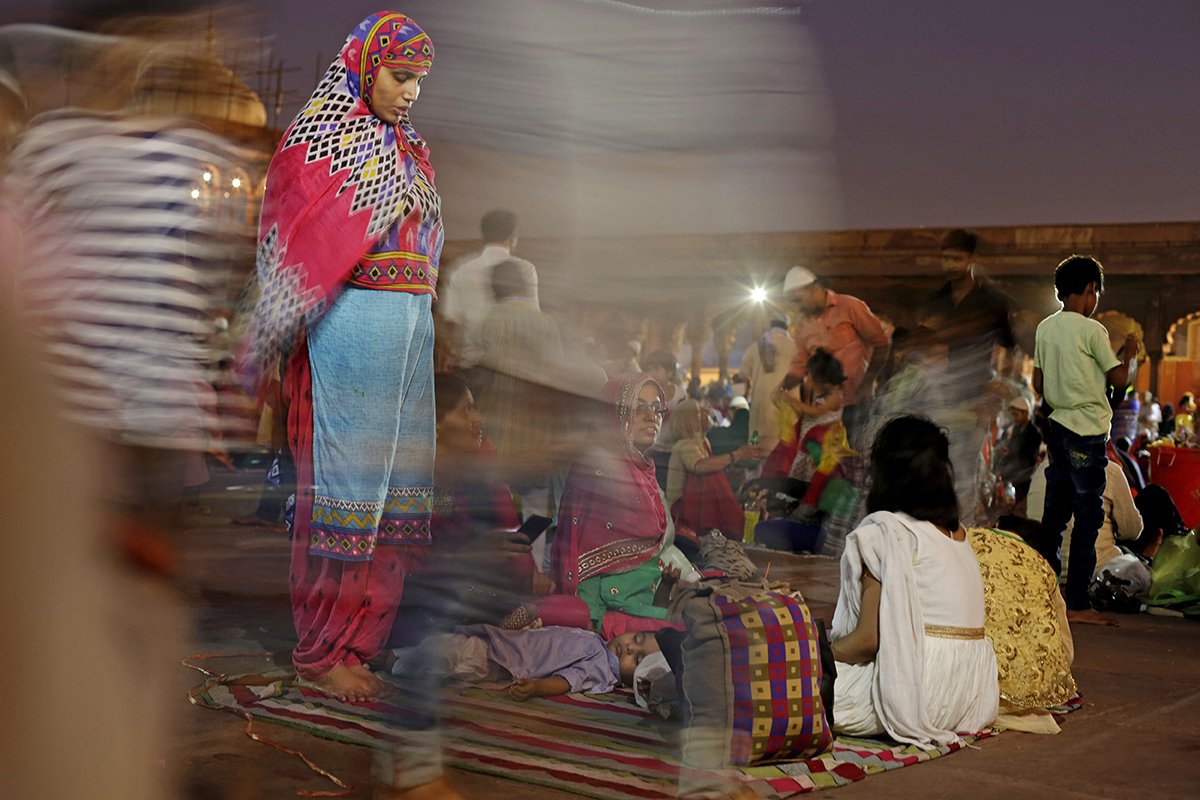 7) Morocco: People during Iftar, a meal after the sunset, consumed on Rabat beach, in Rabat, Morocco on June 21, 2017. 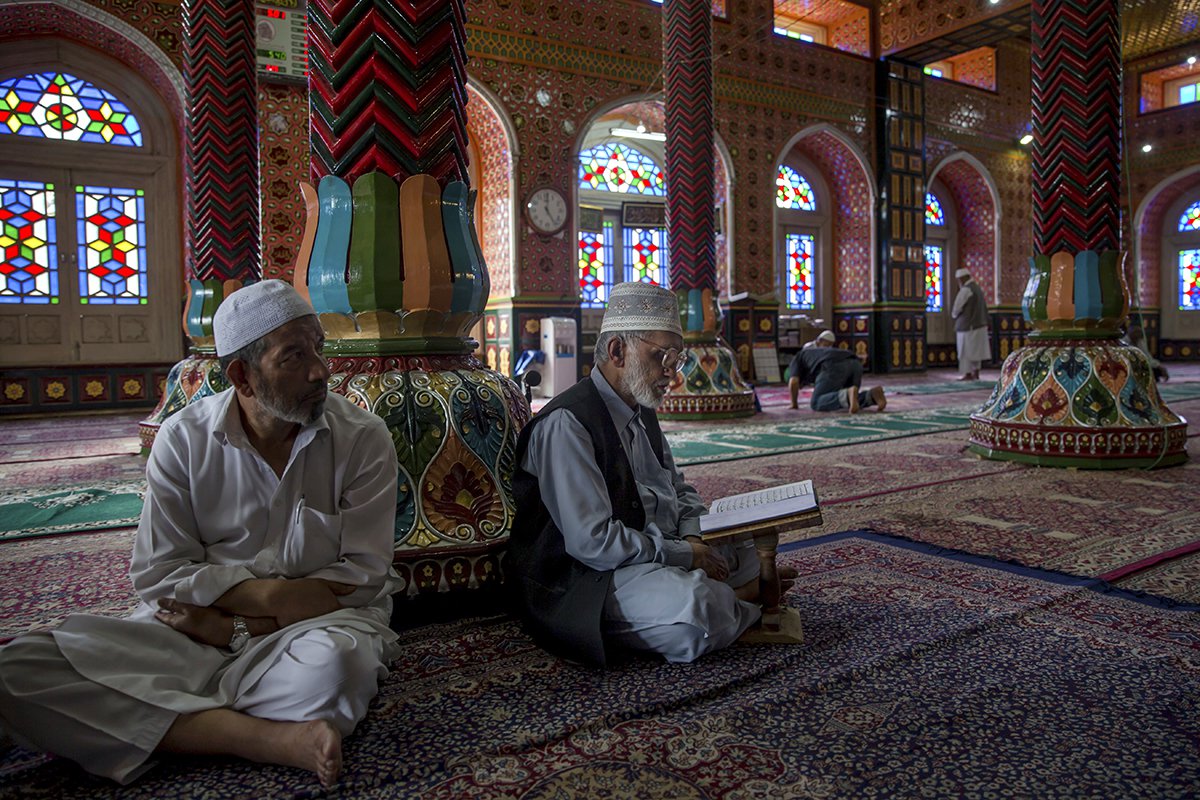 9) Indonesia: Muslims offer prayers and read the Quran on the 21st day of holy month of Ramadan at a Al Akbar mosque in Surabaya early on June 16, 2017.

10) India: An Indian worker dries vermicelli, a traditional sweet dish popular ahead of the Muslim fasting month of Ramadan, at a factory in Allahabad on May 26, 2017.

11) Palestine: A Palestinian man reads from the Koran, Islam's holiest book, during the holy Muslim fasting month of Ramadan at a mosque in Gaza City on May 31, 2017. 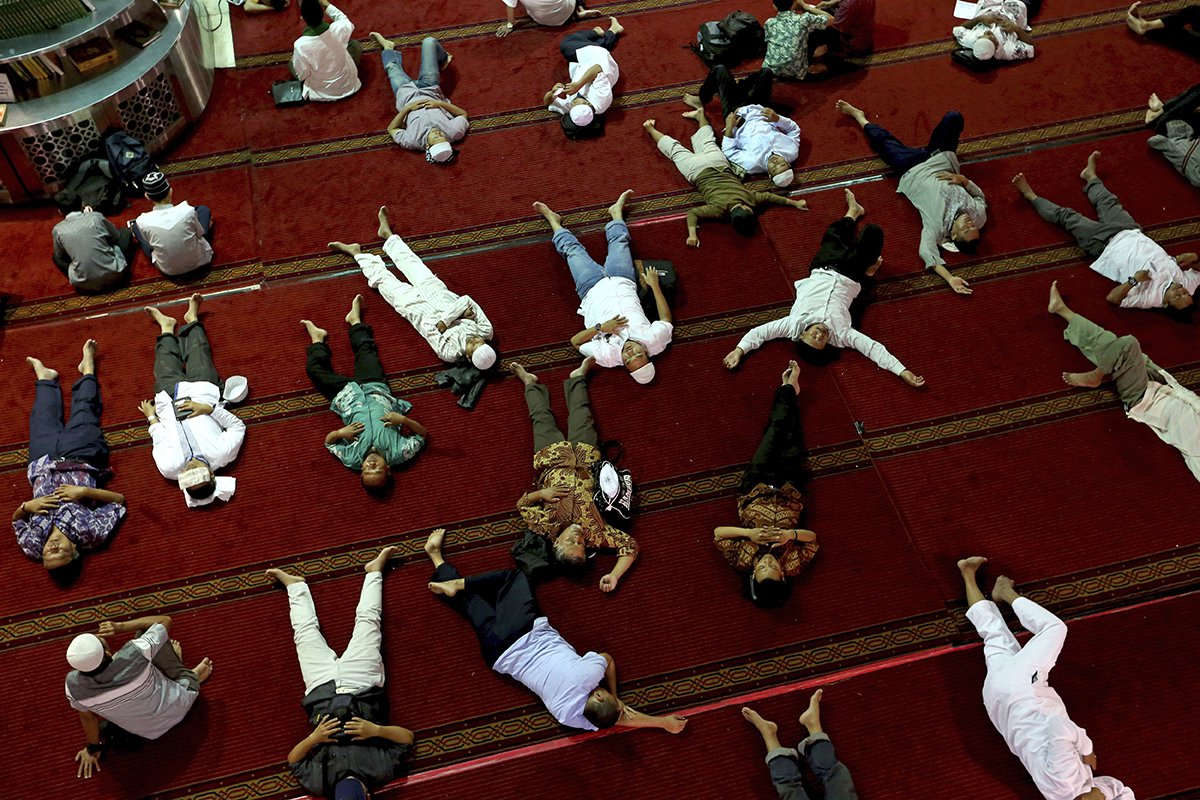 Muslim men nap as they wait for the time to break their fast after Friday prayer at the Istiqlal Mosque in Jakarta, Indonesia, June 9, 2017.
Image: Tatan Syuflana/AP

12)Indonesia: Muslim men take a nap as they wait for the time to break their fast after Friday prayer at Istiqlal Mosque in Jakarta, Indonesia, June 9, 2017.

13) Syria: Syrian residents of the rebel-held town of Douma, on the outskirts of the capital Damascus, break their fast with the 'iftar' meal on a heavily damaged street on June 18, 2017.

14) Turkey : A Muslim worshipper prays as she waits to break her fast on June 21, 2017 outside the Eyup Sultan mosque on the occasion of Laylat al-Qadr which falls on the 27th day of the fasting month of Ramadan.

15) Malaysia: A man arrives at the Wilayah mosque to break his fast and perform prayers during the holy month of Ramadan in Kuala Lumpur on June 7, 2017.