Kenyan girls who grow up in traditionally nomadic, pastoral communities often roam the arid plains of the country with their families in search of grazing grounds for their goats, cows, and camels. But the journey is usually at the expense of an education—moving around so often, and especially to remote areas, makes it difficult for many to attend school on a regular basis.

Enter mobile schools, an initiative on the rise that supports teachers who travel with groups of families, adapting class times and programs of study to the work and migration patterns of pastoral groups. 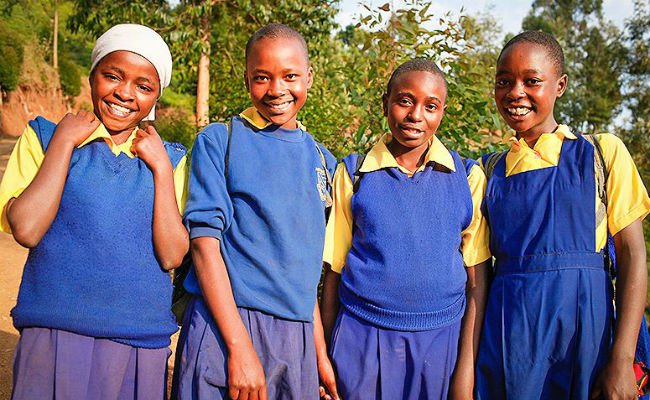 Back in 2010, the Kenyan government partnered with UNICEF to establish the National Commission for Nomadic Education, creating goals and strategies for educational access among nomadic, pastoral communities across the country. The initiative recognized that more informal, mobile schools would need to be implemented. At the time, the government and UNICEF had established the Kalokutanyang Mobile School, serving several villages in Turkana County, but the newly formed commission has since called on church groups and charities to help expand the program. Teachers live with the nomadic groups, setting up tents or simple structures such as makeshift schools, and move with the groups. Today, approximately 90 mobile schools operate across Kenya.

The groups’ on-the-go livelihood isn’t the only educational barrier. Continuing attacks by Islamist militant group al-Shabab, as well as erratic weather patterns caused by global warming—which can bring on heavy rainfalls or terrible drought—also force pastoral groups to leave their settlements suddenly. But the mobile schools do their best work around some of these challenges.

“The school calendar is based around rainfall patterns,” Saadia Maalim Mohamed, who works for Adeso, a nonprofit that operates mobile schools in Kenya, told Trust.org. “Learning takes place during the rainy season when labor demand on the children is low and movement of communities is minimal.”

Girls are especially in need of educational opportunities. Ninety percent of girls in the region’s pastoral groups attend school for less than two years, and in some communities, nearly 20 percent of girls over the age of six have never attended school, according to government reports. Traditionally, girls in these families have been required to look after the animals and do chores while boys’ education is prioritized.

As one Kenyan educational official explained to the IPS news agency in 2008: “The nomadic life favors only boys to be in school. Parents force boys to go to school and the girls are required to look after the animals. [Parents] leave the boys under the care of relatives who ensure they go to school, while girls move around with their parents from place to place in search of pasture for their livestock.”

Gender inequality has long been a problem in the region, and cultural practices such as polygamy, female genital mutilation, and the belief that a woman’s place is in the home—or, in this case, on the plains tending to animals and fetching water—have made it difficult to generate support for girls’ education.

More than a decade ago, studies revealed even more alarming educational disparities in the country. When free primary education was implemented in Kenya in 2003, more than twice as many boys as girls were enrolled in school, according to UNICEF. That situation has since improved nationwide, but only in the central, coastal, and western parts of the country and among wealthier, urban families. In the North Eastern Province, where the majority of pastoral communities reside, many live in poverty and school enrollment rates remain low.

Mobile schools adapt class times to the girls’ schedules; some classes begin as early as five in the morning, before the girls need to look after the animals or collect water, then pick up again in the evening. As each new girl gets a chance to study, the hope is that she will begin to influence her community and change attitudes.

But as valuable as mobile schools are proving to be, most are run by church groups or charities on shoestring budgets. Adeso, which launched its mobile schools in 2014, acknowledges it will run out of funding at the end of 2016.

“Political insecurity, poor road and phone networks, and ‘backwards’ cultural beliefs that discourage girls’ education” have all made it challenging to raise enough funds to keep these programs going, Mohamed said.

David McNair is an award-winning reporter and editor based in Charlottesville, Va. He runs the hyper-local news site The DTM and his fiction has appeared in Virginia Quarterly Review.