Michelle Obama and family head to Liberia, Morocco, and Spain to promote #LetGirlsLearn

On a special trip to Africa, FLOTUS advocates for girls education this week. 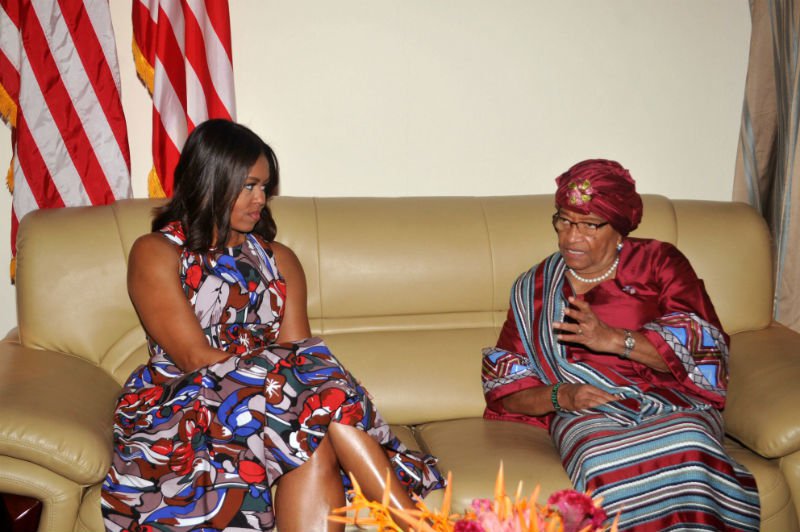 Michelle, Malia, Sasha, and Marian Robinson (mama of the the First Lady) landed in Liberia Monday to promote girls education.

Michelle Obama and family were greeted with a red carpet, and traditional dancers wearing red, blue and white (Liberia and US flag colors.)

FLOTUS met with Liberia’s first-ever female president, Ellen Johnson Sirleaf, who has been leading the country for the past decade.

She’s also visited a leadership camp, a project co-sponsored by the Peace-Corps for girls in Kataka, Liberia.

Meet Hawa and Bendu from Liberia. #62MillionGirls just like them are not in school today. #LetGirlsLearnhttps://t.co/Pg2nsqrwWc

After their Liberia visit, the first family will travel to Morocco and Spain meeting with communities to discuss the 62 million girls who are out of school around the world.

On Sunday, FLOTUS wrote a piece “Why I’m travelling to Liberia, Morocco, and Spain to #LetGirlsLearn” acknowledging the challenges girls face accessing education.

In the piece she wrote for HelloGiggles, she touched on infrastructure, lack of access to menstrual health which causes girls to miss an entire week of school each month during periods. She also addressed a grassroots approach and the reason for her trip.

“Often, the issue isn’t just money and infrastructure, it’s also attitudes and beliefs – whether families and communities think girls are worthy of an education, or whether they believe girls should be kept at home to help with household labor, or should be married off young, sometimes before they’re even teenagers,” she wrote.

Up to 10,000 lives were affected by Ebola in Liberia since the outbreak. The country is very much still recovering from the devastating crisis. During the Ebola outbreak, recovery daily structure, school and education were extremely difficult to maintain.

Prior to Ebola, keeping girls in school had enough obstacles. After any major health crisis prioritizing education — when resources and income is scarce can be even harder. However, it’s so important to #LetGirlsLearn, so that girls and women can be the doctors, health workers and community leaders to help rebuild their own countries.

“We know that giving girls that chance doesn’t just transform their life prospects – it transforms the prospects of their families and their countries too,” said Michelle Obama prior to landing in Liberia.

Her daughters, Malia, 17, and Sasha, 15, along with her mother are not the only special women joining FLOTUS on this week-long journey.

“I’ll be joined by award-winning actresses and education advocates, Meryl Streep and Freida Pinto, and by an outstanding CNN correspondent named Isha Sesay, who are working together to create a CNN film highlighting the stories of girls who are struggling to get an education,” FLOTUS shared.

Leaders in Liberia, like Eddie Murphy, mayor of Kataka where FLOTUS and crew visited the leadership camp for girls, is already feeling empowered by the impact her visit will have for raising up the value of girls education among locals.

“People are going to consider her to be a sister to them," Murphy said.