Meanwhile, others push to “Break Free From Fossil Fuels.” 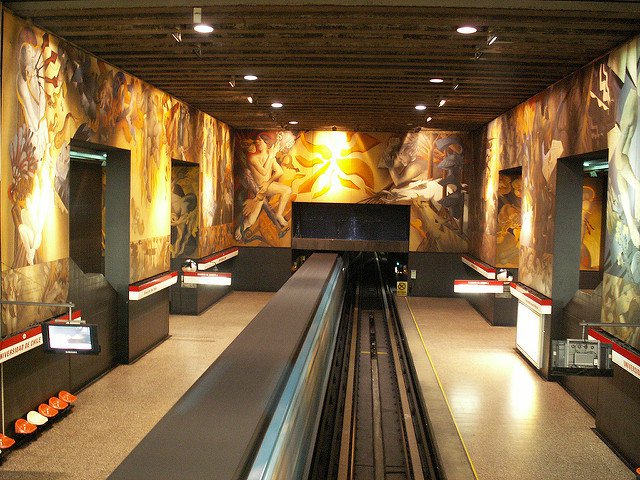 The metro system in Santiago, Chile, will soon be powered by renewable energy starting in 2018.

The city’s system will draw power from two solar energy companies and a wind power farm to provide transportation for over 2.5 million Chileans and visitors in Santiago.

According to Michelle Bachelet, President of Chile, this will save 130,000 tons of carbon dioxide from entering the atmosphere during the 2018 year.

“Passengers who use the Metro will also be able to travel in a means of transport that cares for the planet,” said Bachelet.

This shift will definitely help Santiago join the ranks of other green cities, such as Oslo, which plans to phase out all fossil fuel use by 2050.

While Santiago is green-lighting the path to a more environmentally friendly transport system for city dwellers, others are holding protests to accelerate the switch.

In the last few weeks, around the globe a movement to “Break Free From Fossil Fuels” has driven mass mobilization in cities across the US, Philippines and Australia. Global citizens supporting the movement are demanding the shift to abandon fossil fuels in cities takes place NOW and they’re right.

As the world’s population continues to grow, and urbanization expands, more and more people will live in cities. It’s part of why building sustainable cities and communities is a Global Goal priority.

Today, 54 percent of the global population lives in cities. By 2050, this number is expected to increase to 66 percent according to the UN. So taking the first steps toward making sustainable cities sooner rather than later can substantially combat climate change.

Every step cities and communities take decreases carbon footprints. There other examples of cities making adjustments toward renewable energy, and sharing this knowledge on city planning can “pave the way” to greener cities in the future.

Salud to Santiago for their efforts in meeting Global Goal 11!