Surrounded by actors, Meryl Streep stole the show with her impassioned speech. 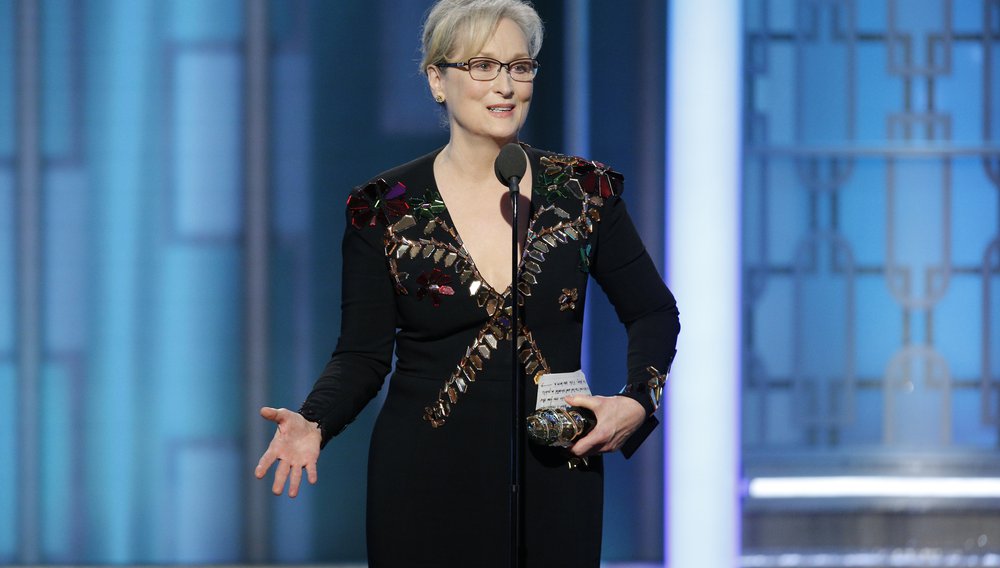 Meryl Streep, among a room full of Hollywood actors, directors, and producers, stole the show as she delivered a quiet but passionate diagnosis of the state of American political leadership at Sunday’s Golden Globe Awards.

Her six-minute speech started by emphasizing the diverse, global nature of the many talented performers that had assembled in Beverly Hills, California, and ended with a call for the press to challenge those in power.

“We need the principled press to hold power to account, to call them on the carpet for every outrage,” she said.

Without invoking any political figures by name, the actress — who had been called upon stage to accept the Cecil B. DeMille Award for lifetime achievement — not-so-subtly called out President-elect Donald Trump for mocking a disabled New York Times reporter in November of last year.

“Disrespect invites disrespect. Violence incites violence,” she said. “When the powerful use their position to bully others, we all lose.”

Though Streep referred obliquely to Trump as “the person asking to sit in the most respected seat in our country,” the message was clearly received by the president-elect.

In keeping with his preference for using Twitter as a political platform, Trump tweeted a three-part response to Streep’s speech, deriding her as a “Hillary flunky.”

Meryl Streep, one of the most over-rated actresses in Hollywood, doesn't know me but attacked last night at the Golden Globes. She is a.....

Hillary flunky who lost big. For the 100th time, I never "mocked" a disabled reporter (would never do that) but simply showed him.......

"groveling" when he totally changed a 16 year old story that he had written in order to make me look bad. Just more very dishonest media!

Streep’s speech began by pointing out the internationalist makeup of the assembled stars, and emphasizing the fluid borders of their personal histories.

Actors included Dev Patel, born in Kenya and raised in London, Ruth Negga, born in Addis Ababa, Ethiopia, and raised in Ireland, and Natalie Portman, who was raised in Jerusalem.

“What is Hollywood, anyway?” Streep asked. “It’s just a bunch of people from other places.”

More broadly, this year’s Golden Globes highlighted an increasingly diverse cross-section of Americans and foreigners working in film and television.

From Donald Glover’s “Atlanta,” a TV comedy about young black men growing up in the southern city, to “Lion,” a film about an Indian boy living in Australia and searching for his estranged family using Google Earth, the award show covered a wide range of themes and subjects.

Here are some highlights that touch on race and diversity, feminism, and more, from the 74th Golden Globe Awards.

2.) Tracee Ellis Ross, who won for best actress in a TV series for her role on “Blackish,” gave a short but inspiring speech about women of color in Hollywood.

“This is for all the women, women of color, and colorful people, whose stories, ideas, thoughts, are not always considered worthy and valid and important,” she said. “But I want you to know that I see you.”

“This is for all the women of color and colorful people." -@TraceeEllisRoss#GoldenGlobes

Glover even gave a shout-out to the rap group Migos in his acceptance speech.

4.) Viola Davis won best performance for an actress in a supporting role, for her work alongside Denzel Washington in the movie “Fences.”

5.) Ryan Gosling thanked the woman in his life in a powerful speech. Without naming her, Gosling praised his wife Eva Mendes, who he said was raising their first daughter, pregnant with his second, and caring for her brother who died of cancer, all of which made it possible for him to make “La La Land.”

"While I was singing and dancing and playing piano and having one of the best experiences I’ve ever had on a film, my lady was raising our daughter, pregnant with our second, and trying to help her brother fight his battle with cancer," he said. "If she hadn’t taken all of that on so I could have this experience, it would surely be somebody else up here other than me.

Ryan Gosling thanks "my lady" Eva Mendes during his #GoldenGlobes acceptance speech: "Sweetheart, thank you" https://t.co/yLxSLYcwNgpic.twitter.com/ChZT3jo9Ic

6.) Actors Dev Patel and Sunny Pawar presented “Lion,” and it was absolutely heartwarming.

Brace yourself for the cuteness of Dev Patel and Sunny Pawar https://t.co/iFBz5sHRKk

7.) Tom Hiddleston gave a speech dedicated to UNICEF and Doctors Without Borders, in South Sudan.

“The idea that we could provide some relief and entertainment for the people who work for Unicef, Médecins Sans Frontières and the World Food Program who are fixing the world in the places where it's broken, well, this is lovely."

Impressed by #tomhiddleston using his #GoldenGlobe speech to say something that felt real about #SouthSudan.

Tom Hiddleston's speech was the best. Sometimes we forget about the true superheroes of the world. Thanks for thanking them! @goldenglobes

8.) Leonardo DiCaprio, who spoke at the Global Citizen Earth Day celebration in 2015  in Washington, D.C.,, gave out the award for Best Actress in Motion Picture‚ won by Isabelle Huppert for the French thriller “Elle.”

9.) “Moonlight,” a powerful film about a young black man growing up in Miami during the War on Drugs that considers themes of sexuality, violence, and race in America, won Best Motion Picture (Drama), but was overshadowed by the musical comedy “La La Land,” which won seven awards.

10.) Pantsuits were the real winner of the Golden Globes.

At least three women showed up to the awards show in pantsuits on Sunday. Popularized by presidential candidate Hillary Clinton, the pantsuit has gained a following through the Pantsuit Nation Facebook page.

"Dresses aren't a requirement. You don't have to wear one. Just be yourself because your worth is more than that." —Evan Rachel Wood pic.twitter.com/NWDtXELcD2

"I hope that future #Stem girls will be inspired by @HiddenFigures" - @octaviaspencer#AskHerMore#GoldenGlobeshttps://t.co/xYiVSvRv8zpic.twitter.com/gLthS0DjBn