Why a yes vote is essential for the mental health of young LGBT Australians. 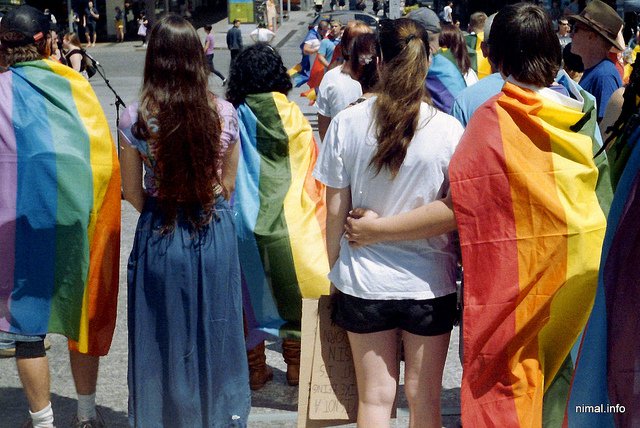 Marriage equality survey forms began being posted out to homes around Australia from 12 September.

Now, as people begin to have their say about whether Australian laws should be changed to allow same-sex couples to marry, mental health groups are voicing their concerns for the well being of the LGBTIQ community.

It's reported that mental health organisations are dealing with a dramatic increase in people in need of their support, with some groups entering crisis discussions on how to manage the influx. They are attributing this spike in demand to the same-sex marriage postal survey and the consequential debate that has ensued.

As a result of the these discussions, five reputable Australian mental health groups — ReachOut, Headspace, Orygen, the Black Dog Institute and Sydney University's Brain and Mind Centre — have decided to launch a new campaign called #mindthefacts this week as a way to cut through the misinformation that is being distributed in the public debate.

According to The Sydney Morning Herald, these gorups are firmly supporting the 'Yes' campaign and say a 'Yes' vote could prevent as many as 3,000 secondary school suicides per year in Australia.

This claim has been formed using findings from research conducted by some of America’s top mental health experts published in JAMA Paediatrics, that concludes allowing same-sex marriage correlates with a 7% reduction in youth suicide attempts.

The groups' campaign also draws on a report by the Australian government, Second Australian Child and Adolescent Survey on Mental Health and Wellbeing, which states that one in 40 of all 12-17 year-olds reported having attempted suicide in the previous 12 months.

According to The Age, youth service organisation ReachOut has experienced a 20% increase in people accessing their online support services in relation to LGBTIQ issues since the postal survey was announced in August.

Feeling sad, mad, bad or pissed off by the #marriageequality debate? Don’t let this get in the way of you having your say. pic.twitter.com/VaJRpzDqp0

The CEO of ReachOut and spokeperson for the #mindthefacts campaign, Jono Nicholas, says the LGBTIQ community experiences discrimination every day and is already at high risk of compromised mental health and self-harm. As everyday Australians continue to debate and vote to decide if they should have the equal right to marry, levels of anger, distress and isolation are increasing.

"As Australia's leading youth mental health organisations, we see, hear and feel the real and devastating link between LGBTIQ discrimination and youth suicide rates and mental illness every day," Nicholas said. "This has only been heightened by the decision to proceed with this postal survey, despite our warnings."

"We therefore feel collectively compelled to intervene in this debate to ensure Australians have access to real clinical evidence and research, not alternate facts and fiction," he said.

Former Australian of the Year, Professor Patrick McGorry, a mental health expert, has no doubt that this spike in mental health is related to the same-sex marriage vote.

"We are hearing a lot from LGBTIQ people that this is reviving traumatic experiences, particularly from their school years," he told The Age.

Marriage equality advocates opposed a public vote on the issue, fearing the pain and hurt the campaign and debate would cause LGBTIQ people, including their friends and family. Instead they were pushing for a free vote in parliament on the matter.

On the other side of the fence, the ‘No’ campaign was officially launched in Sydney over the weekend, led by a group of conservative politicians.

According to The ABC, Australian Conservatives senator Cory Bernardi spoke to a crowd of 1,000 at the ‘No’ campaign launch saying, "If the state redefines marriage it also redefines how you can speak, think, advocate, and believe about marriage."

Sydneysiders woke up to giant sky writing on Sunday morning revealing ‘vote no’ scrawled across the sky, sparking reactions from both sides of the debate.

It is a life and death decision. Choose life and Vote NO! pic.twitter.com/eU9XEbpKkB

Thankfully this Vote No sign is being swept away by a righteous wind. #VoteYes Aussies 🌈🌈🌈 pic.twitter.com/qkQbCufbej

A ‘No’ campaign TV ad was also launched by the Coalition for Marriage .

Last week during prime time TV as the final episode of "The Bachelor" aired, a TV ad by the ‘Yes’ campaign aired starting at the end, “For every Bachelor and Bachelorette, vote yes.”

Allan Fels from the National Mental Health Commission said the survey debate has increased hate and discrimination against LGBT people who are now experiencing "damaging behaviour in their workplaces, communities and in social and traditional media".

If you are in Australia and haven’t received your survey in the mail yet, do not fear — there is still time. The Australian Bureau of Statistic predicts that all eligible Australians should receive their forms by September 25. Voters are being advised to vote immediately and return the form on the same day as receiving it.

🚨 NOT TO WORRY! 🚨
Keep checking your mailbox until Monday.

Global Citizen urges everyone to vote and let love win!

If you or someone you know is experiencing depression, anxiety or suicidal thoughts you can contact Beyond Blue for support by phoning 1300 22 4636.

If you are feeling angered or distressed by the marriage equality debate ReachOut has some tips on their website on how to look after yourself during this time.