Meet the innovative duo changing the way we think about growing food and using waste. 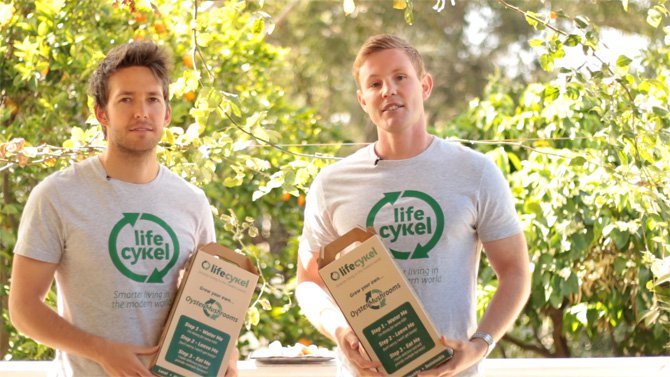 Ryan and Julian are two laid-back mates who have gone from working in the mining industry to changing the way we connect with fresh and local food. They are the founders of the social enterprise Life Cykel, and they are on a mission to inspire people to live sustainably and grow and eat healthy, locally grown food.

The pair spent months researching and experimenting with mycology (the study of mushrooms), before launching Australia’s first urban mushroom farm. The best thing about their locally grown gourmet oyster mushrooms? They are grown in used coffee grounds. Yep you heard us right!

The innovative duo, cycle around the Western Australian town of Fremantle collecting used coffee grounds from cafes and restaurants, before returning to their commercial urban farm where they mix the grounds with mushroom spores and let the magic happen.

For every 5kg of coffee grounds they collect, they can grow 1kg of mushrooms, which they supply to local restaurants and sell at local farmers markets. In addition, people can purchase their own grow-at-home mushroom kits where all you have to do is open the box and mist it with water, sit back and watch your mushrooms grow. Local schools love these grow-at-home kits as they are fun and easy way to inspire and teach kids about growing their own food.

Life Cykel is an urban farm that is changing the way food is produced and shows how the carbon footprint of agriculture can be reduced. Diverting food waste and repurposing it in their farm - well we just think that’s genius!

Australian’s LOVE their coffee, and many of us rely on a caffeine fix to wake up and get our morning buzz on. However, most people don’t realize that just 1% of the coffee bean actually ends up in your cup and the leftover 99% ends up in landfill. In Australia, four million tonnes of food is wasted per year which ends in landfill. When coffee grounds (and all other food waste) are dumped into landfill, it creates methane, which is a greenhouse gas that is 25 times more potent than the carbon pollution that comes from your car exhaust! The City of Fremantle in Perth has a well known street called the ‘Cappuccino Strip’ where baristas will make your favourite brew, but every year 300 tonnes of coffee grounds are sent to landfill in this city alone! That’s 18 million cups of coffee!

Oh, and to answer the question on everyone’s lips - no, they certainly do not taste like coffee. In fact, the boys are hard at work trying to produce the elusive mushroom that gives you that coffee buzz. Fingers crossed for them!

TopicsEnvironmentAustraliafoodSustainabilitysustainable agriculture
Brought to you by