Meet Amani Al-Khatahtbeh, a Global Citizen of America Who Is Giving Muslim Girls a Voice

“I feel the way we need to talk about the headscarf needs to shift and become more empowering.”

Amani Al-Khatahtbeh has a message for Global Citizens: We need you now more than ever.

The 24-year-old New Jersey native is the founder of MuslimGirl.com, a website that allows young Muslim women to share their stories of what it means to grow up Muslim in America. She recently published her own personal story, “Muslim Girl: A Coming of Age,” as a way to help educate other Americans about reality as an often-targeted religious minority in the US.

She’s identified herself as a Global Citizen for years. Amani was just 9 years old on 9/11, which she now calls a turning point in her life because of the widespread increase in Islamophobic rhetoric and behavior that erupted after the terror attacks. She was called a racial slur for the first time in fourth grade, and quickly grew ashamed of her religion. But a life-changing trip to Yemen when she was just a little bit older showed her a global perspective on Islam — and America — that inspired her to return to the US and speak up to redefine and defend her identity as a Muslim woman.

Now, amid a new rise in anti-Muslim rhetoric and potential bans of Muslims entering the country, Amani says that she and other Muslims need Global Citizen allies to stand with them to protect the rights of all people. 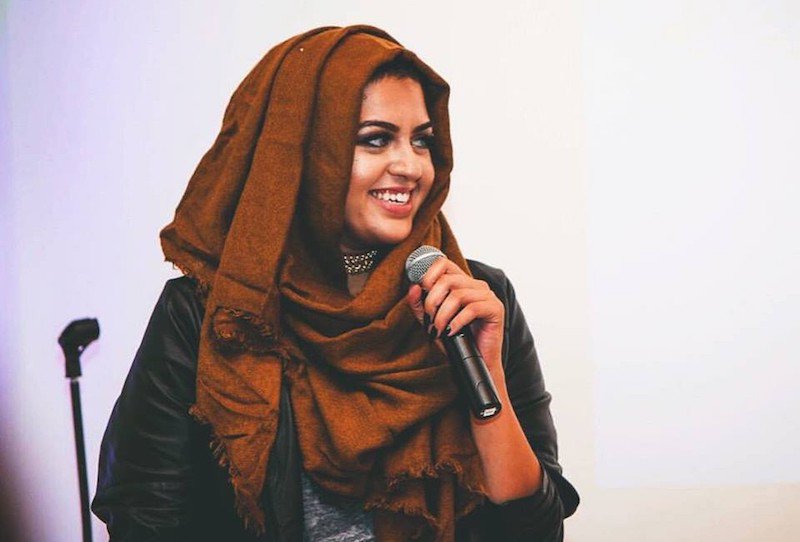 Tell me about your work at MuslimGirl.com.

I started Muslim Girl when I was a high school senior out of frustration for the way that Muslim women’s voices were being excluded from the conversation, even though the conversation centered on us for the war on terror. So many policies were based on these misconstrued or preconceived notions about who we are, what we stand for, what we think about these issues, so it was a platform to have our voices included, and a space for us to share our ideas.

What kinds of conversations were you being excluded from?

A lot of these discussions, especially right after 9/11, were about going to war with Afghanistan and Iraq, and there were so many conversations about women needing to be liberated, you know, [from] these backwards brown men who were oppressing women, as if we don’t have a voice and can’t speak for ourselves. It disempowered us even further. It ended up negatively impacting Muslim women more than anyone else. I believe if we have a strong voice in the media we can prevent something like that happening again.

You’ve pointed out that Muslim women have more visibility because of their headscarf.

Yeah, I think one thing we don’t talk about is ... how Muslim women are targeted when they wear a headscarf. We are one of most visible religious minorities in the country, and we are lightning rods that attract negative attention and are bearing the brunt of it. We attach all these assumptions to it, about Muslims and Islam, like that it wasn’t an autonomous decision, or that it’s a sign of oppression or repression, as if a Muslim woman is incapable of making a decision for herself. I feel the way we need to talk about the headscarf needs to shift and become more empowering.

As soon as 9/11 happened, that’s when things changed. I just remember the feeling of being so aware of being different all of a sudden. It’s the same year I was called a racial slur by one of my classmates in fourth grade, and it opened my eyes that it was something I should be ashamed of. That resulted in horrible self-esteem issues, and this feeling of inferiority compared to my counterparts. I think back to my childhood and it was doused in bullying and alienation from people around me, which had a real impact, especially when you’re at that age.

How did you become a Global Citizen, someone concerned with the world’s issues?

Of course growing up in New Jersey and being born and raised in the States I was able to enjoy a lot of privilege. I grew up in a conservative suburb in New Jersey and it was very alienating, I was one of only a few Arab girls in my school and I was often a dissenting voice when teachers taught Islam in a wrong way. That reinforced a need in me to step up and talk about it.

When I traveled to Middle East and saw how things were and how it was being portrayed I thought that people needed to know about the contrast I was seeing: how hospitable everyone there is and how loving it is, and how in a society where Islam is practiced as a national religion, how beautiful it can be and how beautiful its tenets are. That inspired me to speak up about my background and who I am as much as possible, as opposed to feeling like I had to hide my religion.

Do you think this idea of global citizenship is important? Why or why not?

I believe deeply in the power of storytelling, in sharing those stories and universal experiences that make us human and allow us to empathize with each other, especially right now when Muslims are being so dehumanized and talked about in such a way. The polls say a majority of Americans have never met a Muslim before and yet we just elected a president based on his platform about a Muslim minority. That will result in policies that will target a marginalized community, and the people voting for them have no idea how it will impact those people. I think we can push back against that.

You shared your own story recently in your new book, ‘Muslim Girl: A Coming of Age.’ What compelled you to write your memoir?

My book chronicles what it’s like to be a Muslim girl growing up after 9/11 and how it impacts me. All this hateful rhetoric, people think it happens in vacuum without trickling down and affecting people like me, and that’s the connection my story is able to make and I think sharing our stories can help effect change.

Have you heard from readers, either of your book or MuslimGirl.net, about how hearing other people’s stories has changed their minds?

Yeah! What I hear from our non-Muslim readers is “I never knew it was this bad.” I think it’s opened people’s eyes to the reality of the situation and that’s what we’re asking, we want people to be aware of how their actions affect other people, especially those who are marginalized and feel alienated. So we strengthen our alliances, and this is time we have to stand together.

Do you reach a lot of non-Muslim readers?

We suspect a very large number of our readers now are non-Muslim, and one of the reasons we haven’t blocked comments on our website—- which is something we considered given volume of harassment our writers are susceptible to — one of the reasons we haven’t turned off comments is we recognized that a lot of valuable conversations are taking place here. You know, someone will post a very basic question or some type of judgment or stereotype and you’ll see a series of responses or threads from Muslims who explain the answer. That’s the one of the best things that MuslimGirl can offer. I think it’s one of the reasons it was able to attract so many people in the first place, it’s something so many people can get behind.

What do you hope to accomplish in the future?

One thing we always say is we’re not going to stop until we are the first and only mainstream media outlet for and by Muslim women. We are the first company on a Forbes list that’s run by a Muslim, and we’re run entirely by women. We are such a young company right now and we’ve been able to accomplish so much in the past year when it comes to media representation of Muslims, I hope to keep expanding that.

What do you think about Global Citizen issues going into the new administration?

I think our role right now is transforming into being in a position of accountability, we’re going to have to serve as the eyes and ears for what’s to come and we are going to have be louder and bolder in the years to come. I don’t think a single person on our team shies away from that, we’re all prepared for it and ready to combat it head-on. As sad as I am to say it, and I don’t think we should be placed in this position, you know, the past year and a half of the election has been hard enough, but media coverage has been dominated by such destructive headlines. I think we can turn it into something positive.

What can other Global Citizens do right now to help effect change?

It’s so funny, I graduated from Rutgers, I’m a Jersey girl through and through. I was in elementary school in New Jersey when the twin towers were struck. And in New Jersey our mantra is “Jersey roots, global reach,” and that applies to Global Citizen as well. It’s about starting with roots wherever you are, wherever you come from, and the impact will ripple out and become something global.

What that means to me is if you have a friend, for example, saying something racist or wrong, being able to correct them and tell them it’s wrong and holding that line in social circles and your space, that is an impact that can be exponential and travel outward. That’s where it starts. That’s best thing our allies can do, is check your own people, make sure everyone around you is getting educated.